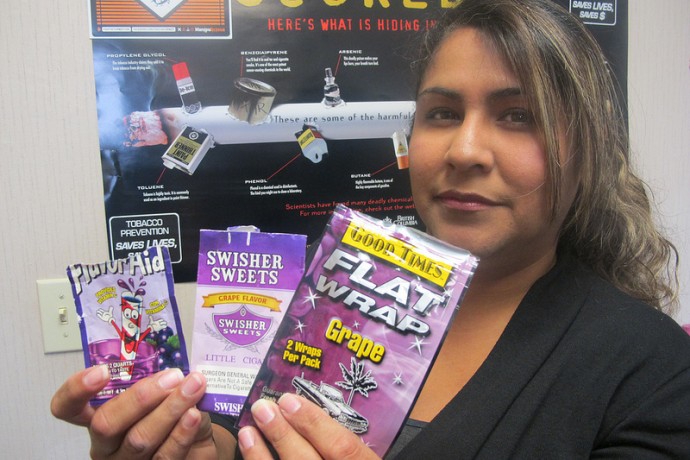 Teens who are buying their own Halloween treats are as likely to find chocolate-flavored cigars on the candy counter at some corner stores as M&Ms, Hershey bars or Good & Plenty.

Flavored cigars, which have become increasingly common over the years, appeal to teens due to their fruity flavors and because packaging is designed to look similar to many popular candies, said Emme Chavez, teen outreach specialist for the Hispanic Tobacco Prevention Network in Wisconsin. 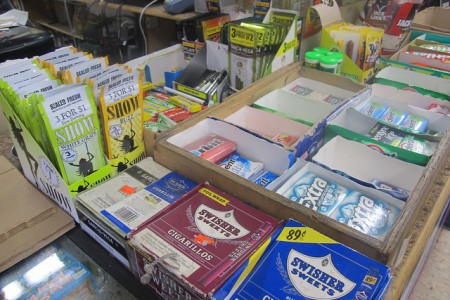 Flavored tobacco products can be found on the counter next to candy in central city stores. (Photo by Edgar Mendez)

“Flavored or not, cigars cause cancer, heart disease, lung disease and many other health problems,” stated Tom Frieden, CDC director, in a press release.

Teens get their hands on candy-flavored cigarettes and cigars from shop owners who ignore the law, or by asking adults to purchase the products for them, said Tina Rivera, program coordinator at the Tobacco Prevention Program at UMOS.

States tax flavored cigars and cigarettes at lower rates than regular cigarettes, making them more affordable for cash-strapped teens, added Chavez. For example, one store near South 9th and West Mitchell streets sells a three pack of large grape-flavored cigars for a dollar.

The “Backpack Tobacco Act,” proposed recently in the Wisconsin state legislature, would close the tax loophole. If approved, the legislation would equalize the tax rates for all tobacco products.

Tobacco products are illegal to purchase or use for anyone less than 18 years old, but 12 percent of Wisconsin teens smoke, according to CDC data.

“I’ve gone into stores and bought a flavored cigarillo (cigar),” said Marlon Tirado, 18, who participated in a program two years ago aimed at identifying South Side shopkeepers selling tobacco products to minors. Tirado volunteers with Rivera and is a member of the Fighting Against Corporate Tobacco teen group.

She calls the practice “immoral,” adding, “Parents can barely tell the difference between the flavored cigars and candy so how are kids supposed to?”