You are here: Home / Home / Carousel / Federal grant to Next Door to prompt ‘dramatic change’ in Head Start
Share this... 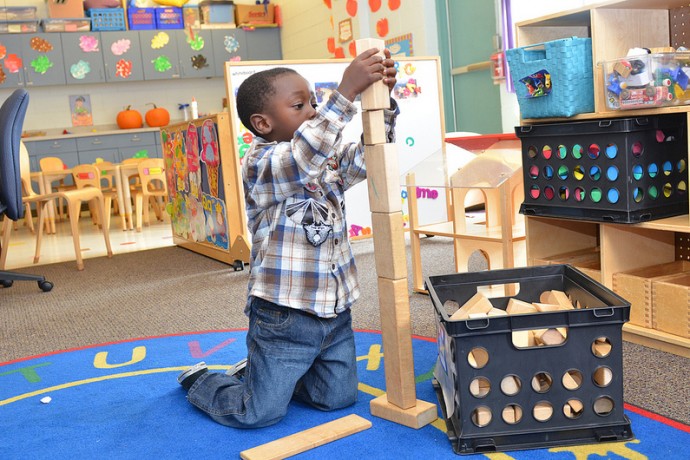 A Head Start student at Next Door Foundation reaches for the sky with his block tower. (Photo by Sue Vliet)

When the Social Development Commission, the dominant Head Start provider in Milwaukee for decades, lost its federal funding earlier this year, the stage was set for Next Door Foundation to significantly expand its Head Start facilities and services. Next Door received a $6.9 million federal grant for the expansion.

“This grant will allow us to move out into the greater Milwaukee area,” said Principal and Education Leader Kate Linscott, who directs Next Door’s educational programs for children 3- to 5-years old.

Next Door, 2545 N. 29th St., served approximately 300 students in 2012-2013. In 2013-2014, its first year as an independent Head Start grantee, the organization is aiming to serve more than 1,000 students, according to Executive Director Dr. Carol Keintz. She said that Next Door should reach peak enrollment by the end of this month.

A former Head Start delegate of the Social Development Commission (SDC), Next Door became the second-largest Head Start provider in Milwaukee this year, behind Milwaukee Public Schools (MPS). Milwaukee’s other major providers include Council for the Spanish Speaking and Acelero Learning.

In addition to acquiring a new facility, Next Door has hired a large number of staff. According to its annual report, the organization had 26 teachers or assistant teachers and 17 classrooms in 2011-2012. Though the new staff levels are “a moving target,” Keintz estimates that Next Door may soon have approximately 106 staffers and 52 classrooms. 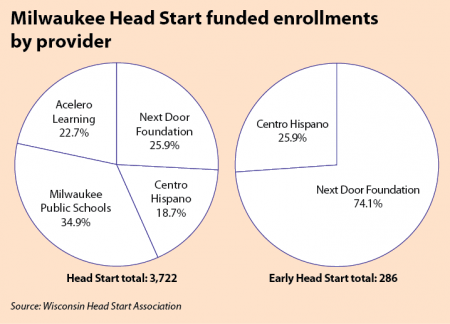 Next Door acquired its future Capitol Heights facility in August with Head Start funding that would have otherwise been used to lease space, as well as contributions from foundations and individual donors, according to Keintz.

“The site allows us to expand into a greater area in Milwaukee,” Linscott said. “Before we were mostly in the Metcalfe Park area.”

The 103,000-square-foot former Northwest General Hospital will be able to accommodate 20 classrooms and more than 400 children, according to Linscott.  It will also include room for enrichment activities such as art and music.

Workers are now reconfiguring the former hospital building for educational use. “They’re in there doing the preliminary work we need to construct classrooms and spaces,” Linscott said.

The renovations have not gone entirely according to plan, however. Keintz said the facility will likely open the first week of April 2014. Originally, the opening had been planned for January, according to a press release. Problems with the building have pushed back timetables and increased costs, according to Keintz.

The chief problem, Next Door discovered, was the presence of asbestos. The building had “excessive abatement,” Keintz said, referring to a process by which asbestos is enclosed to prevent individuals from inhaling toxic fibers.

However, Next Door’s board of directors decided to remove the contaminated materials.

“You can do partial abatement, but it can eventually crack and peel and air can get in—we didn’t want to go there,” Keintz said. “Our board felt very strongly that we wanted to create the safest environment possible for children.”

The removal process will eliminate any danger to students, but “it’s very expensive,” Keintz said. “It has to be done before any construction can start, and the people removing it need to have proper protection.”

A 2,705-square-foot playground behind the building is already in place. On Sept. 12, 300 volunteers built the playground in collaboration with Kohl’s Cares, KaBOOM! and Next Door.

Next Door is providing Head Start services at temporary sites such as Milwaukee Environmental Sciences (MES) one mile away and Tendercare Child Care Center, across the street from the new site, according to Keintz.

“Even though our building isn’t available, our programming is already up and running in a new neighborhood,” Linscott added.

At MES, Casey Sperry, 25, a University of Wisconsin-Milwaukee (UWM) graduate, instructs half-day classes with two groups of 15 preschoolers. Sperry, or “Mr. Casey” to his pupils, helps them read stories, discuss the calendar and do puzzles to “get ready for their future.”

Sperry and Natalie Nichols, Next Door’s site director at MES, said that the community reception has been very positive.

“Although we’re working out of a temporary space, we’ve gotten together a really nice community in the short amount of time that we’ve been here,” Nichols said.

Children at temporary sites will move to the Capitol Drive facility. Students at other locations, such as Next Door’s headquarters at 2545 N. 29th St., will remain where they are. 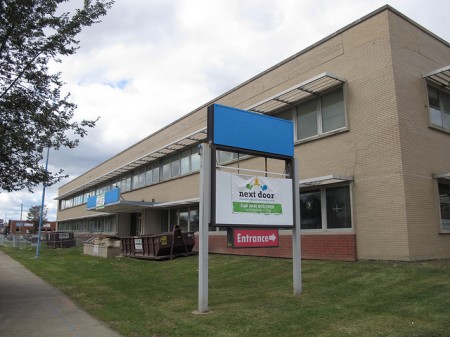 Currently under renovation, the former Northwest General Hospital at 5310 W. Capitol Drive is set to open in April 2014 as a Next Door Head Start facility. (Photo by Rick Brown)

This month, Next Door will launch a home-based Head Start program with six staff members. It will be the first program of its kind to be specifically targeted toward 3- and 4-year-olds in Milwaukee.

Keintz said that the comprehensive program will target a broad spectrum of families, including minority populations “that are basically invisible in our community,” such as Hmong, Somali, and Karen-speaking families, who often have limited resources.

“We want to help transition the children into center-based programming so they can be ready for school when they’re six,” Keintz said.

Bilingual, “culturally matched” staff members will make weekly 90-minute visits to children’s homes 36 weeks a year, leaving materials and instruction for the family, Keintz said. Next Door will also transport the children and parents to a classroom to allow students to socialize with other children.

The program aims to strengthen bonds between families and reduce isolation, according to Keintz.

Next Door is recruiting families for the program through its parent educators, who “live and work in the community,” Keintz said. Some families already have enrolled in the program, which will have a peak capacity of 72 families.

Based on a long-term model previously used by other Head Start programs, the research-based program will integrate literacy, education, health and social development into a curriculum to “hook families into resources” while allowing them to preserve their heritage, according to Keintz.

“Home-based Head Start is better for these families, because they worry about their children losing their cultural identity and languages,” Keintz said.

A New Day at Next Door

The new Head Start situation in Milwaukee has presented both opportunities and challenges to Next Door.

Keintz said the changeover from SDC was confusing to many Head Start parents. Because SDC had run programming for so many years, Keintz said, “some families even believed that because SDC’s programs ended, that Head Start itself ended in Milwaukee.”

Funding for Next Door’s Head Start services also decreased as a result of the federal sequester, noted Keintz, who said the organization has had to “shuffle things around,” but was able to avoid cutting either students or staff.

Keintz said she sees the federal grant as an opportunity for Next Door to expand services beyond what SDC previously offered.

SDC did not have a home-based program or offer full-day programming, Keintz said, adding that Next Door can offer new, more comprehensive models of Head Start services to city children.

“All of the partners who now have the Head Start grants—ourselves, Council for the Spanish Speaking, Acelero, MPS—believe that we can provide the high-quality, research-based education practices that the children of Milwaukee deserve,” Keintz said.

“I think the change in the Head Start model will be dramatic,” she said.