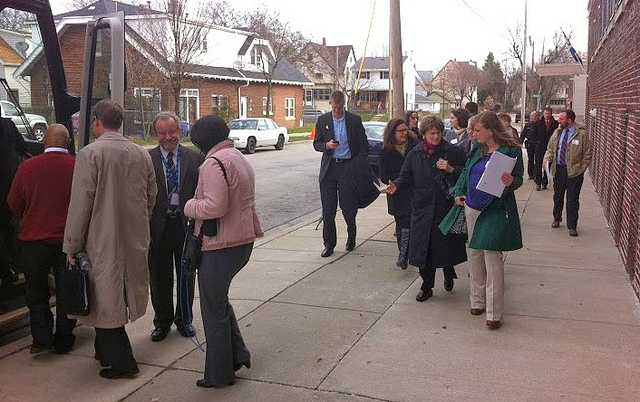 Harambee neighborhood tour participants get back on the bus after viewing the Riverworks Lofts. (Photo by Brendan O’Brien)

Activists have taken their show on the road in the Harambee neighborhood, where their community and economic development efforts have begun to pay dividends.

During a two-hour bus tour of the neighborhood hosted by LISC Milwaukee, a group of community leaders, policy makers and politicians heard from community leaders about a handful of initiatives along Martin Luther King Drive.

“There is a lot of passion in these neighborhoods from residents who want to take charge and create a better life for themselves and for their neighbors,” said Leo Ries, executive director of LISC Milwaukee as he stood at the front of the bus. “That’s really the goal here is to have residents managing their neighborhoods.”

One of those initiatives is focused on Clinton Rose Park, where community members plan to revitalize the athletic facilities and highlight the history of the park, which was home to a Negro League baseball team about 80 years ago.

“We want to reinvigorate that history and connect the residents to that history and give them a sense of ownership,” said Leif Otteson, a community organizer with the Harambee Great Neighborhood Initiative, during the bus tour. 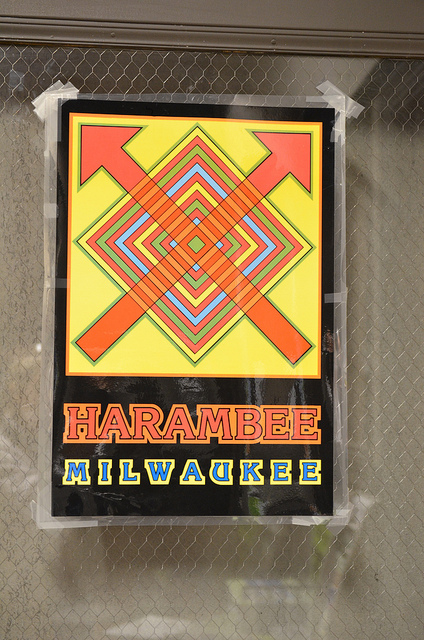 Tour participants also heard from Adrian Spencer, a 37-year-old mother, who had enough of gunfire hitting her house.

In July, Spencer packed up her four children and moved out of her home in Harambee, located across from a bar at the corner of North 2nd Street and Keefe Avenue.

Spencer, whose house was hit by stray bullets on four separate occasions, was done with the ruckus, thuggery and violence that spilled out from the bar.

“It became so unsafe that we had to get up and move,” said Spencer, who regularly cleaned her street of the broken booze and beer bottles from the night before.

Despite moving, Spencer has remained steadfast in her attempt to improve the neighborhood. Spencer, along with her mother, cleaned up a small park across the street from her former house. The effort included building benches and planting in the park, where she now organizes small neighborhood events such as pumpkin carvings during Halloween.

“Even when you want to keep your family safe, you still want to do things to improve the environment,” Spencer said. “I still love the Harambee neighborhood. I wish I didn’t have to move, but safety [comes] first.”

The tour also stopped at the Five Points Exchange, where Keefe and Atkinson avenues meet 6th Street and Martin Luther King Drive. The tour group heard about how the Riverworks Development Corp. is working to remove blighted properties, create green space and improve the street infrastructure, all in hopes of attracting businesses and housing to that area.

“This is where we see a lot of great opportunities happening,” said Darryl Johnson, executive director of the Riverworks Development Corp.

The bus also rolled past the ARTery Project and Beerline Trail. There, community development advocates hope to turn a vacant railroad corridor into a paved bike and walking trail, along with an outdoor venue for performance art.

Tour participants got off the bus at the Riverworks Lofts, 3372 N. Holton St., to learn about the $6.8 million adaptive-reuse housing development consisting of 36 lofts in a vacant industrial building. They also traveled past a house in the 2500 block of North 2nd Street that was recently purchased with the help of ACTS Housing, an organization that assists low-income families buy foreclosed houses.

“All of this happens because of an environment of self-empowerment,” said Carl Quindel, executive director of ACTS, which has helped families purchase more than 360 foreclosed houses since 2008.

The tour concluded on King Drive where participants heard about the thoroughfare’s business improvement district and the King Commons Developments, initiatives aimed at rejuvenating commercial properties and creating a vibrant business community in the neighborhood.

“It has great people and it’s a great neighborhood,” he said.