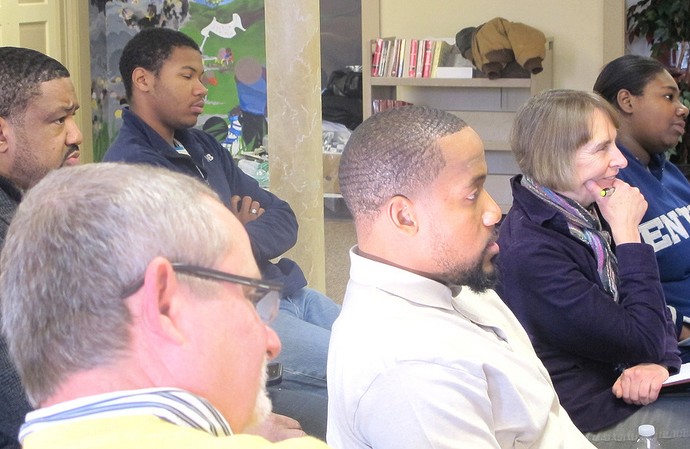 Metcalfe Park resident Duril White, the chef/owner of New Manna Catering, was interested in purchasing a foreclosed house priced at $2,500. But then he found out that repairs would cost about $25,000 and had to be completed in 90 days.

White attended a recent Metcalfe Park community forum to find out whether help was available to purchase the house — and he got the answer.

Martha Brown, deputy commissioner of the Department of City Development, explained that the $25,000 estimate for repairs is based on a contractor doing the work. If the buyer can do some or all of the work, the cost will go down, she said. And the city can extend the deadline for completing repairs by another 90 days, Brown added.

She also suggested working with nonprofits that specialize in housing, such as Select Milwaukee, to resolve problems with credit history and become eligible for loans.

Brown was one of a number of representatives from city government, foundations, and faith and nonprofit organizations at the meeting, which was held at Reformation Lutheran Church, 2201 N. 35th St. Discussion focused on the foreclosure crisis and jobs for young black men.

“We will accept offers of 75 percent of the asking price,” she informed forum attendees. The city is currently offering 247 foreclosed homes, including single-family and multi-family houses, duplexes and condominiums, for prices ranging from $2,500 to $94,300. 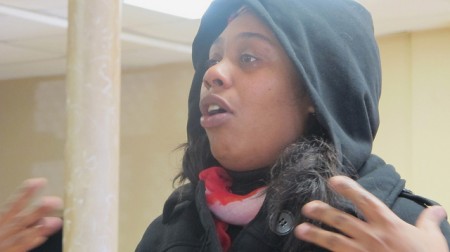 Brandetta Taylor talks about her experiences buying a home. (Photo by Andrea Waxman)

All Brown’s suggestions will help White with the obstacles he is facing, he said.

Mayor Tom Barrett emphasized his administration’s commitment to city neighborhoods that are bearing the brunt of the subprime-lending crisis and massive job losses of the last five years. He pointed to a $12 million allocation in the 2014 budget to fund the deconstruction, demolition and rehabilitation of foreclosed homes. The city currently owns 1,500 foreclosed homes, according to Brown.

Metcalfe Park resident Brandetta Taylor gave an emotional account of being forced out of three consecutive rental homes due to foreclosures. Laid off from a job in a day care center and pregnant with her fifth child, she and her four sons became homeless for a time, she said tearfully.

In 2009, with the help of the Dominican Center for Women she was able to get her credit rating in order and restore stability to her family by purchasing a home with her tax return, for $9,500. Taylor recently got a job driving a school bus.

“I loved [the house], even though it was a wreck,” said Taylor, who claimed that she didn’t even know how to change a light bulb at that time.

In addition to teaching her financial literacy, the Dominican Center connected Taylor with free and low-cost building materials and volunteers who assisted with home repairs. The center also helped her take advantage of City of Milwaukee Health Department home environmental health programs to prevent lead poisoning and asthma.

The help Taylor got renovating her house reduced her costs from $20,000, the city’s estimate, to $8,000. She covered that with another year’s tax return.

Barrett noted that renovating foreclosed properties offers young black men a chance to advance their careers. “We want to give people who live in these neighborhoods, who are most affected, an opportunity to be involved in [the work].”

He emphasized his interest in “jobs, jobs, jobs,” touting the city’s success in working with Northwestern Mutual to ensure the company would build its new headquarters downtown. Eleven hundred jobs will be preserved and 1,900 will be added, he said. The city budget also includes funds to hire 120 new police officers, Barrett noted.

Saying that she stepped out of poverty a year ago because she got such an opportunity, Cross stressed the need for support systems to help people find employment and succeed at jobs.

“If you haven’t been working for 10 or 15 years, you can’t just jump out and get a job and make it through that process,” she said.

The Metcalfe Park Community Action Team is talking with Gorman & Company and WHEDA about rehabilitating neighborhood homes, according to Cross.

“We want to start with one block where we actively engage young people [training and employing them to do rehab work] and show what advancement of young black men really means,” Cross said.

The Milwaukee Job Corps Center offers free job training for youth ages 16-24 in a residential setting, Barrett said. However, several attendees noted that the program is not open to people with felony convictions.

Pastor Darnell Robinson of Harvest Covenant Church, pointed out that the restriction excludes many who need work. He described Milwaukee Working, a relatively new initiative that has trained and employs 14 felons to do a variety of work including rebinding books and constructing cabinets and crates.

“We could do the same thing in Metcalfe Park,” Robinson said.