You are here: Home / News / Arts and Recreation / Favorite of 2013: Long-awaited Packers field opens in Mitchell Park
Share this... 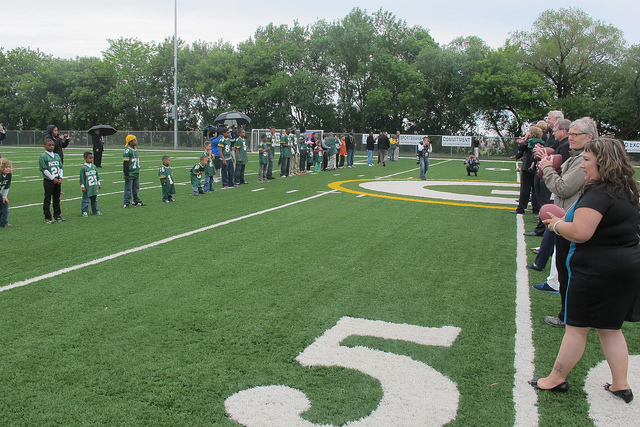 I’ve been a Packer fan since childhood. I’ve cringed and cheered while watching quarterbacks such as Don Majkowski, Brett Favre and Aaron Rodgers sling footballs across a field with the iconic Green Bay Packers “G” in the center. In 2013, a new football field, emblazoned with the same historic “G,” opened in Mitchell Park, in the heart of the neighborhood where I grew up. The youth and community of Clarke Square now have a piece of the Packers in their own backyard.

On a gloomy Wisconsin day, a youth band plays as a crowd sits in the bleachers overlooking a football field adorned with the unmistakable and iconic Green Bay Packers “G.” It’s not game day at Lambeau Field, but it is a new day for Mitchell Park and Clarke Square. The Journey House Packers Field is now open.

With dignitaries such as Gov. Scott Walker, Mayor Tom Barrett, Packers’ President Mark Murphy and Packers Hall of Famer Willie Buchanan on hand, the field was celebrated as a place where youth will play football and learn life lessons such as teamwork, dedication, commitment and leadership.

“Those lessons will radiate from the field to their homes to their schools and communities,” said Charles Brown, director of youth programs at Journey House. 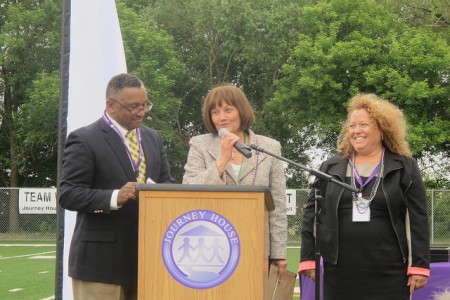 It was Brown who got the call from the Packers in 2009, asking whether he’d like a field once used by the team for practice, but now stored away in 30 huge rolls.

“We had a field and we never used it,” Murphy said.

Brown’s first youth football team at Journey House won no games and didn’t score a touchdown until the second to last game. The team spent that year practicing on a field with no goal posts or painted lines in a section of Mitchell Park that used to hold the sunken gardens. He couldn’t say no.

Brown called the field a dream come true and credited nearby residents who had  asked for more playing fields during the Clarke Square Neighborhood Initiative planning process, funded by the Zilber Family Foundation.

“The residents said they’d like to live in a neighborhood with football and soccer fields,” Brown said.

Now, according to Murphy, the neighborhood is the only one in the U.S. that has an NFL field not located at an NFL facility.

Installing, constructing and preparing a site to house the field, which Brown calls an outdoor classroom, cost $1.4 million. The NFL contributed a $200,000 matching grant, and the Charles E. Benidt Foundation made gifts totaling more than $1 million for the field. The final $1.6 million to cover the cost of a new parking lot and other finishing touches is still being raised.

The project’s main partners are Journey House, Marquette University High School  and Milwaukee County Parks. The real winners, according to Barrett, are ”the kids who will play on this field.”

The high school’s freshman and sophomore football teams will play their home games on the new field, as will the lacrosse team. Journey House youth football league and cheerleading teams also will call the field home.

“They’re playing on the same field that Brett Favre and Donald Driver once played on,” Walker noted.

What do kids think about that?

“I think it’s pretty cool,” said Vance Rehak, who plays linebacker and wide receiver for the Journey House Packers, shortly after catching a touchdown pass in the left corner of the end zone.