You are here: Home / News / Arts and Recreation / TRUE Skool prepares for grand opening at Grand Avenue mall
Share this... 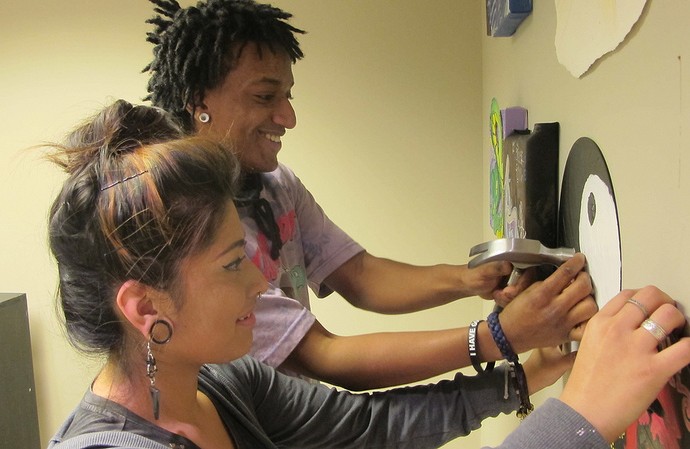 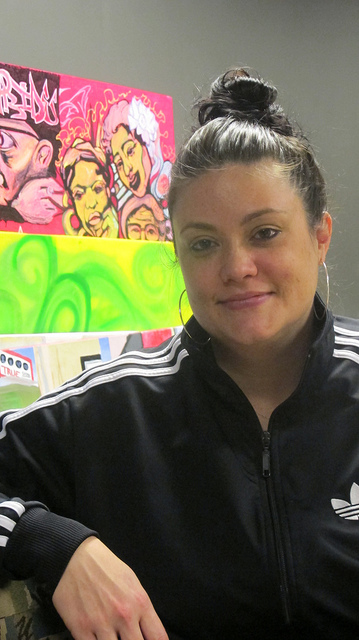 TRUE Skool founder and executive director Sarah Dollhausen sits in the gallery at the new location. (Photo by Andrea Waxman)

Energy was running high in the gallery at TRUE Skool’s new home in the Grand Avenue mall’s Plankinton Building on a recent Saturday. Teens from around the city hung paintings, painted walls, removed packing materials, ate pizza and joked with each other and their teaching artists as they helped ready the space for a grand opening on Milwaukee’s Gallery Night, Friday, Jan. 17.

“We moved (from 4850 W. Fond Du Lac Ave.) because we were on top of each other. We had run out of space,” said Sarah Dollhausen, TRUE Skool founder and executive director. The arts program had been located on the North Side since 2006.

TRUE Skool is an after-school and summer program for high school students ages 14 to 19. Rooted in Hip Hop culture, it engages teens in arts that originated in the urban experience.

When Dollhausen began teaching computer skills to teens at the Milwaukee Christian Center in the 1990s, she saw that they did not want to continue sitting in a classroom after a whole day of school.

“So I began to think of ways to engage them in education that were outside of the box and I started to use music and art as tools,” Dollhausen said.

She grew up in Hip Hop culture with friends who were involved in break dancing, graffiti art and emcee-ing. “For us, back in the ‘80s this provided a sense of community; it was about supporting each other,” Dollhausen added. With that frame of reference, what is now TRUE Skool’s arts program began to evolve.

Dollhausen continued to engage young people through Hip Hop culture at the Latino Community Center and she and graffiti artist Eliot Patterson launched TRUE Skool in 2004 with a block party. That year, the celebration of urban art and music focused on graffiti art.

“We wanted to help bring back the art form of graffiti, not vandalizing, but promoting this as an art form because we were working with young people who saw this as an outlet. They saw an art form that was attractive to them and it gave them a chance to explore something they already were interested in,” Dollhausen said.

Today, TRUE Skool’s program includes visual art, dance, music and DJ training. Except for an advanced painting program, students are accepted on a first-come-first-served basis. Recently TRUE Skool has served 30-35 teens per session and has had a waiting list for the last year and a half. The larger space will allow the group to increase participation to 50 students, Dollhausen said. 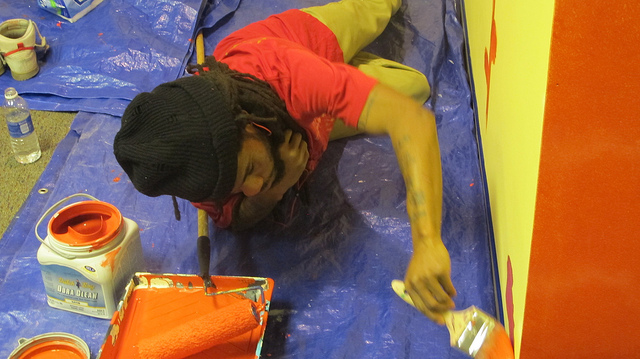 Milwaukee High School of the Arts senior Jasmin Quezada appreciates the teaching artists, who she said “are very knowledgeable and easy to talk to.” She has been attending since her freshman year and enjoys collaborating on projects with other students, meeting new people and talking with Gallery Night visitors about her artwork.

“We walked around and as soon as I got there I knew ‘this is the place to be,” said Tate, adding, “I have always been interested in music so as soon as I found an outlet where I can express myself in music, I took that opportunity.”

The program is free but participants must “pay” by putting in 10 hours of community service per session. There are 10-week sessions in spring and fall and a 6-week session in summer. The social justice component is integrated into the arts programming. Partners including the ACLU, Reproductive Justice Collective, Urban Underground and YWCA present topics that often become the content of the students’ art and music projects. The Reproductive Justice Collective, shares TRUE Skool’s new space.

Teens can sign up for the spring session on Gallery Night, which will feature student art, live DJs and guided tours of the new space by students.

TRUE is an acronym for ‘truth and reality in urban education. “It’s a play on words, which is why you see school spelled ‘skool,’” Dollhausen said.

“The idea is about schooling young people on what’s really going on in urban communities and getting them to be part of the solution instead of always being blamed as the problem.”