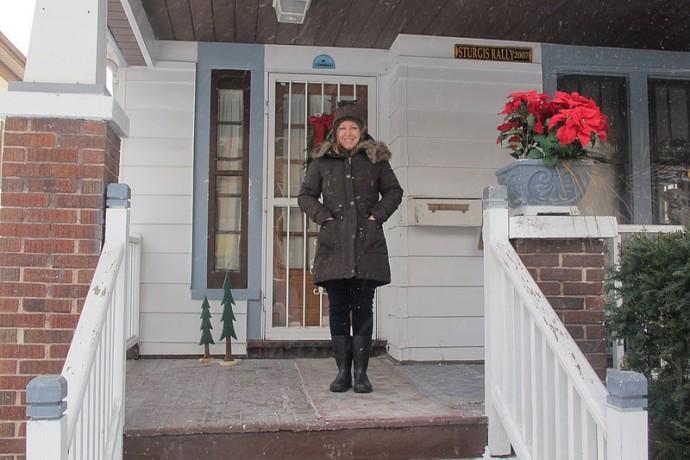 Julia Nokovic says that without the matching grant, she would have continued to put off much-needed repairs on her Silver City home. (Photo by Edgar Mendez)

Julia Nokovic, an 18-year resident of the Silver City neighborhood, had been putting off fixing her roof for years.

“But I knew the small leaks could become big ones soon,” Nokovic said.

While handing out fliers this summer for Layton Boulevard West Neighbors (LBWN), a non-profit serving her area, she noticed an announcement for a small matching grants program available to residents for home improvement projects. Knowing she would be partially reimbursed for improving her home was all the impetus she needed to go through with repairs she’d been dreading for years.

“They got it done in three days and the work was great,” said Nokovic of the $3,000 project.

The best part of it all, according to Nokovic, was receiving a $500 check. 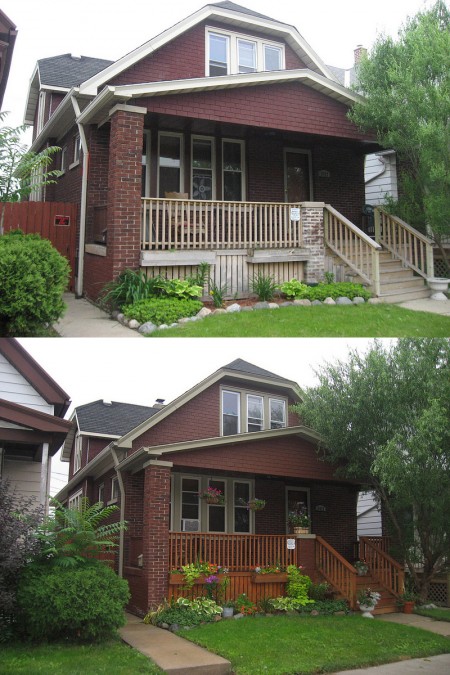 Melinda Rodriguez’s bungalow before and after home improvements. (Photo courtesy of LBWN)

The $500 matching grant Nokovic received is the result of the School Model Block initiative, which funded matching grants for home improvement projects to residents in the four-block area surrounding Doerfler School, 3014 W. Scott. The initiative is one of 11 catalytic projects created as part of the Quality of Life Plan for the neighborhood, unveiled in 2011.

Three separate matching grant programs are available in the LBWN neighborhood. A $1,000 grant for similar projects, funded by the Zilber Family Foundation, is also available to residents in neighboring Clarke Square, according to Ofelia Mondragon, home improvement coordinator for both neighborhoods. There are no income restrictions for eligibility for that grant, but it’s first come first serve, Mondragon added.

In total, grants of about $29,000 leveraged more than $154,000, a five to one return on investment. Funding for the grants also came from the Wells Fargo Housing Foundation and the Metropolitan Milwaukee Fair Housing Council.

Mondragon calls the grants a motivator.

“We’ve had people buy a door for $100 and get back $50,” said Mondragon, adding that many of those repairs would have gone undone, affecting the look of the neighborhood.

Melinda Rodriguez, who lives in Layton Park, stained her porch, painted the trim on the exterior of her home and put in new flowerboxes.

She said if not for the grants, “I would’ve totally put it off.”

“You hear so many negative things about the city and that people don’t care, but there’s so many people who do care and value where they live,” Rodriguez said.

The area is full of beautiful housing stock, but throughout the years a lot of it has been damaged or destroyed, said Brianna Sas-Perez, community outreach manager for LBWN. But, she said, the houses are coming back to life as a result of new homeowners and others taking advantage of small matching grants to save money on larger projects. Typical improvements included new roofs, porches, new windows and foundation work.

Nokovic couldn’t be happier that she took advantage of the program. She said once her roof was done she felt so grateful she went to her room, dropped to her knees and thanked the Lord, adding.

“I helped the neighborhood; I helped myself.”