You are here: Home / Home / Carousel / Parents and children ‘browse’ for the best education possible
Share this... 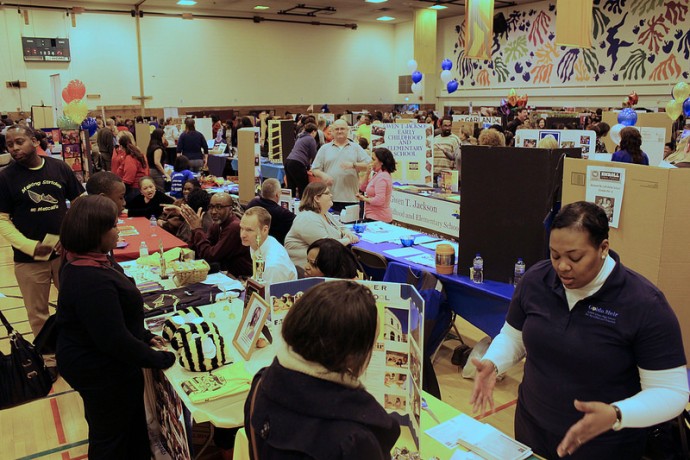 She was looking for the school that will provide the best fit for her 6-year-old son, who will be in first grade next fall.

Suggs was among hundreds of parents and children looking for information at Milwaukee Public Schools’ All-School Enrollment Fair held at the Milwaukee High School of the Arts, 2300 W. Highland Ave.

The fair was the first of its kind in the school district in recent years, according to MPS spokesperson Tony Tagliavia.

Representatives of more than 100 of the district’s schools set up the booths, outfitted with brochures, logos, pictures, science experiments, pens and sometimes candy, to illustrate the merits of their respective programs.

Programs covered pre-kindergarten through high school. Neighborhood schools, specialty schools and charter schools within the district were represented, according to Tagliavia.

Parents and students got a chance to meet teachers such as Sarah Stoychoff, a first-year teacher at Rufus King International School, 1801 W. Olive St., a high school that prepares students for college. She said there is value to open enrollment.

“Each high school offers something different, so depending on what you need you can change,” according to Stoychoff.

MPS students were also there to point out the highlights of various schools to prospective peers.

James Mason, 17, an aspiring mechanical engineer, is a junior at the School of Career and Technical Education, 5075 N. Sherman Blvd. He spent the morning in front of his school’s booth, giving spectators a look at the robot he built.

Mason said, “I want to inspire others to do what I do, do what they love, which is for me, building robots.”

Meanwhile, Taneika Suggs made a series of stops at elementary school booths, asking about what her son would learn, the schools’ recreational opportunities and after-school programs. She also inquired about each school’s distance from her home. Suggs said, “This year I had a lot of problems with transportation, hassles that I don’t want to deal with next year.”

Parents also cited safety, school uniform requirements and whether the school offered year-round educational programs as factors they will use in making their decisions.

“You can browse, you can look, you can go back again, you can ask as many questions as you like,” said Taylor.

Taylor brought her three children, one an infant, to the fair. She said they braved the snowy weather because “I am determined for their education.”

Taylor said she is looking for a middle school for her son, Derrick, a sixth grader. He said he’s hoping for a school “with good teachers and good friends.”

The official start date for registration was Monday, Feb. 3, but parents could register early at the fair. Early registration, however, does not guarantee a place in the school selected, according to Tagliavia. All applications received before the closing date, Feb. 28, will be given equal consideration.

Not everyone made a final decision before the fair ended.

By the time she was ready to leave, Suggs said she was leaning toward the Milwaukee Academy of Chinese Language, 2430 W. Wisconsin Ave., for her boy, an only child. It’s close to home so transportation shouldn’t be a problem.

And, Suggs said, she likes the idea of her son learning a second language.