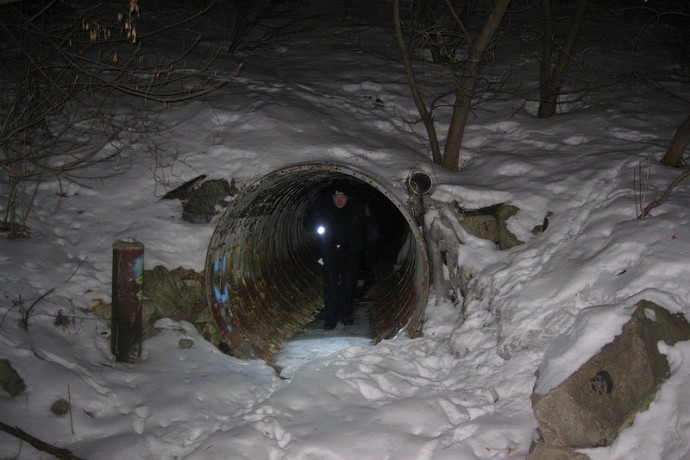 Milwaukee police officer James Knapinski walks out of a rain tunnel near the Milwaukee River on the city’s near north side as he searches for the homeless. (Photo by Brendan O’Brien)

A grumpy brown cat crouched as low as it could against the icy floor of the rain tunnel as it greeted the unwanted guest into its dank abode near the Milwaukee River on the city’s near north side.

The fat cat twirled around and crawled away as James Knapinski, a hunched-over Milwaukee police officer, made his way up into the man-made cave.

A ray from Knapinski’s flashlight lit up the tunnel, as a killer icicle loosened its grip on the steel and crashed down next to him.

It was all in a day’s work for the nine-year veteran of the force as he chuckled, turned around and returned to the mouth of the tunnel.

Knapinski was not searching for thugs or thieves, but for some of Milwaukee’s 1,500 homeless individuals, many of whom he has encountered as a member of the department’s Homeless Outreach Team.

Knapinski and the other six members of the team check up on the homeless and help them find the resources they need to get off the street.  He said that he has helped push many people “in the right direction.” 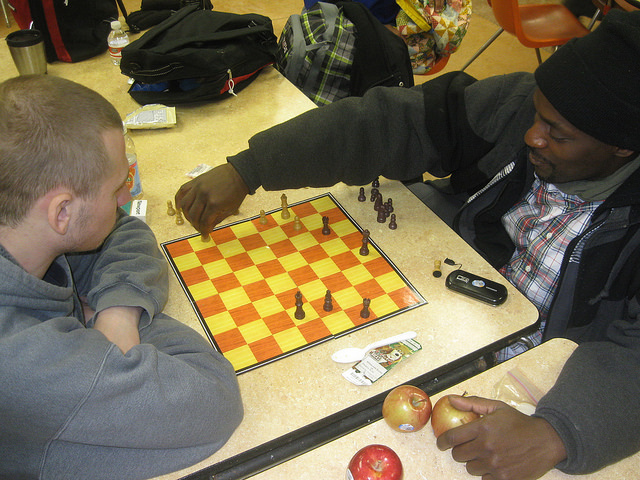 But on this freezing January night, Knapinski was part of Milwaukee’s “You Count” effort, in which the city counts the number of homeless people.

Knapinski was one of the officers assigned to help volunteers from agencies that work with homeless individuals find them in tight corners of viaducts, in huts made of fallen branches and discarded wood near the Milwaukee River and in deep rain tunnels.

During the count, volunteers surveyed people to gather demographic information, such as their age and gender, and ask them questions about their plight, such as why they are homeless.

The count helps local agencies “measure our progress for ending homelessness and identify some of the unmet needs of the homeless,” said Phil Connelly, an outreach coordinator at the Milwaukee Continuum of Care, which coordinated the effort.

The count is mandated by the U.S. Department of Housing and Urban Development.  Federal agencies use the data gathered to determine the amount of funding that will go to local organizations that serve the homeless.

“It’s really important for us to get a really accurate count, especially now in these economic times,” said Connelly, noting that a similar count is held in July.

During the count, organizations throughout the city such as St. Benedict the Moor, 1015 N. 9th St., set up warming centers.  Volunteers also handed out backpacks full of personal items and food to the homeless people they found.

The number of homeless individuals has remained relatively unchanged over the past couple of years, with 1,428 counted in July 2013.

“I think it’s going to be very interesting to see what happens today” in terms of the numbers, said Roy Bishop, a volunteer who works with the homeless veteran population.  “I am hopeful.”

Bishop said he sees the positive outcomes of the work that is being done throughout the city to reduce homelessness, especially with veterans. The key, he said, is to couple mental and substance abuse treatment programs with safe places to live.

“I see it every day. I see people come off the street and go into one of our treatment programs and three months, six months, a year later they’re living in their own independent place and they have a job,” he said.

Another key, according to Knapinski, is to treat people who are homeless with dignity.

“Everyone’s has a story,” said Knapinski, one of the original members of the department’s homeless team when it was established four years ago.

Before being put on the team, Knapinski began keeping an informal record of information about homeless individuals he came across, such as their picture, name, age and any medical condition they had.

“It ends up becoming helpful” for ambulance workers and firefighters who use the information when they respond to a call to help a homeless individual, he said.

Michael, a towering, bearded 30-year-old homeless veteran, who begs for money on the city’s North Side and suffers from post-traumatic stress disorder, said he appreciates the count and the work of officers like Knapinski.

Michael told the survey volunteers that Knapinski saved his life on the coldest night of the year, grabbing him off the street and taking him to a shelter instead of letting him freeze to death.

After he was interviewed and given a much-needed backpack filled and supplies, Michael remarked, “The only thing you have to worry about when you are homeless is surviving.”