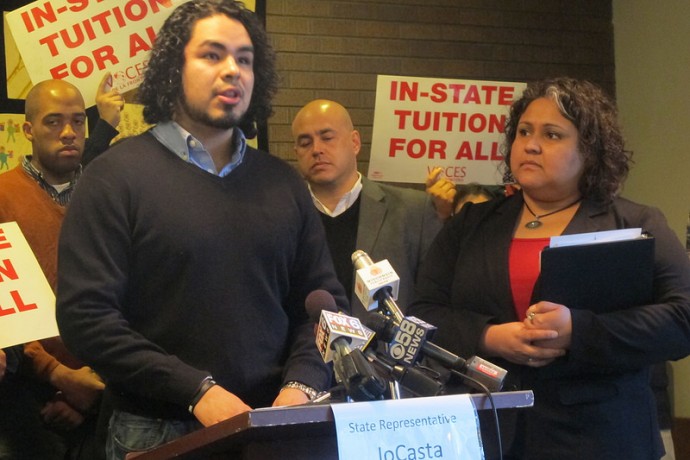 Eleventh Assembly District Rep. Mandela Barnes, chair of the Black and Latino Caucus, said at a press conference that the measures are about achieving equality. “These (bills) are about civil rights, human rights and ending discrimination,” Barnes said.

The driver’s license bill also would help improve safety, according to Zamarripa, a Democrat. “We’ll have more insured and educated drivers on the road,” she said.

If the bill is passed, undocumented drivers would be able to apply for and receive a REAL ID non-compliant driver’s license after fulfilling requirements determined by the Wisconsin Department of Transportation (DOT). The federal Real ID Act, signed into law in May 2005, requires states to verify that an applicant is in the country legally. It was originally created to strengthen security, and establishes standards for issuing state driver’s licenses and ID cards, and for official purposes such as boarding federally regulated flights, according to WDOT. 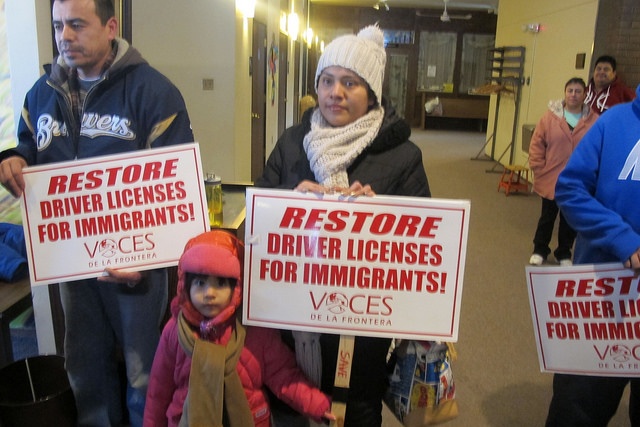 But, in 2011, Wisconsin acts 23 and 32 allowed WDOT to process applications for driver’s licenses and ID cards that do not comply with the REAL ID Act, as long as they are marked as non-compliant. The current WDOT process for any type of driver’s license requires documentary proof of U.S. citizenship or lawful presence in the country, but if the proposed bill is passed that requirement would be eliminated for non-compliant cards. Such cards could not be used for federal purposes such as boarding a plane.

The cards look identical to state driver’s licenses, except that compliant REAL ID cards have a star verification mark on the upper-right corner. The non-compliant version has no star.

Knowing the new ID would be different from a standard driver’s license causes some apprehension for potential users. Uvaldo Lopez, of Milwaukee, said he is excited about the prospect of undocumented immigrants being able to attain valid licenses, but wonders if carrying a non-compliant REAL ID could result in law enforcement targeting.

Zamarripa said that she’s spoken with Police Chief Edward Flynn before about related issues and feels confident that targeting would not occur.  “He’s told me personally that he wants our immigrant communities to cooperate with law enforcement and does not believe in city cops calling ICE,” Zamarripa said.

The driver’s license bill has received some bipartisan support, with Republican State Rep. Garey Bies of Sister Bay signing on to the measure.

The tuition-equity bill would allow undocumented students to qualify for in-state tuition under three conditions. They must have graduated from high school or received a declaration of equivalency in Wisconsin, reside in the state for at least three years after attending their first day of high school, and sign an affidavit saying they have filed or will file for permanent residency in the United States as soon as they are eligible to do so.

Currently, undocumented students who attend the University of Wisconsin or technical college must pay out-of-state tuition, which raises the price significantly. At UW-Milwaukee (UWM) the in-state tuition for 12-18 credits is $4,650, compared to $9,514 for non-residents.

Mario Gomez, a sophomore at Milwaukee Area Technical College (MATC), said he would like to transfer to UWM, but if the bill doesn’t pass, he would likely be priced out. He said it frustrates him that undocumented students are treated like newcomers despite living in Milwaukee almost their entire lives. Gomez pleaded for the same opportunities afforded other students in Wisconsin.

“We want to reach our dream jobs, but without access we can’t. We can’t afford to pay out of pocket,” Gomez said.

All three bills have been introduced previously but failed. The in-state tuition bill, previously known as Bill A75, passed the legislature in 2009 before Gov. Scott Walker’s 2011 budget bill eliminated the practice.

Republican State Rep. Jessie Rodriguez, who represents a district that includes Oak Creek, Franklin and South Milwaukee, thinks the bills will fail. Rodriguez does not support them because they were introduced late in the legislative term. She added that Zamarripa should reach out to everyone in the legislature.

“There’s a lot to be discussed in terms of these bills,” she said.

Walker has endorsed only the bill that would require state agencies to designate March 31 as “Cesar E. Chavez Day.” State employees wishing to observe the holiday would need to give up another state holiday, according to Zamarripa.

Walker could not be reached for comment on the other two bills, nor could Republican representatives Don Pridemore, a vocal opponent of expanding immigrants’ rights, or majority leader Rep. Bill Kramer.