You are here: Home / News / Arts and Recreation / Mayor highlights “I Have A Dream” program in annual address
Share this... 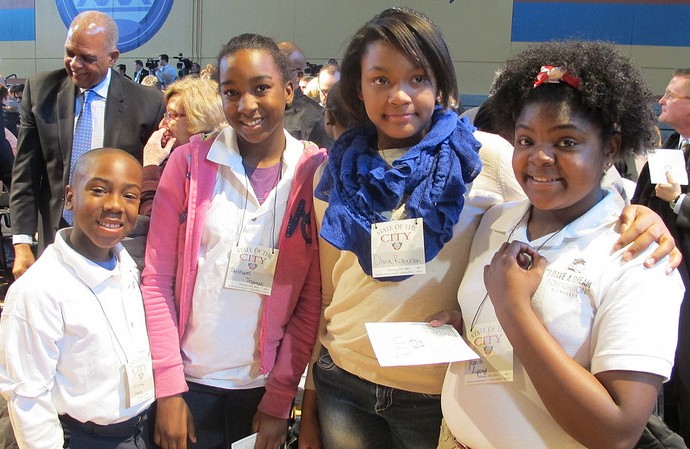 Four middle-school students took a break from classes one morning this week at the invitation of Mayor Tom Barrett, joining municipal leaders, dignitaries and residents at the mayor’s State of the City address at Journey House.

During his speech, Barrett introduced sixth-graders Allontay Haynes and Daishanell Thomas and seventh-graders Olivia Roberson and Juanita Lipsey, all members of “I Have A Dream” Milwaukee. He pointed to the college preparatory program for students from low-income communities as an example of educational justice at work in Milwaukee.

“Overcoming poverty is not a gesture of charity — it is an act of justice,” Barrett said, quoting the late South African leader Nelson Mandela.

The four students represented 52 sixth- and seventh-graders who joined “I Have A Dream” when it was launched here in 2008. At that time, they were in first and second grade at Clarke Street School, 2816 W. Clarke St. 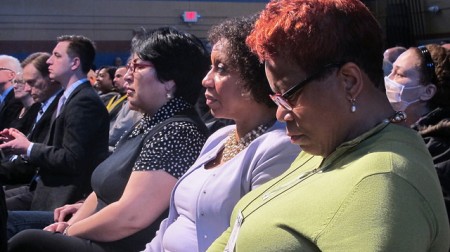 A large audience of municipal leaders and residents listen as Mayor Tom Barrett reports on the state of the city. (Photo by Andrea Waxman)

Juanita Lipsey hopes to follow in her mother’s footsteps, to college and the Marines. “My dream is to get good grades so I can grow up and be a leader in my community,” she said.

Classmate Olivia Roberson likes math, reading and being with her friends at Clarke Street School. As a member of Ton Ko-Thi Children’s Performing Ensemble, her schedule is packed, she said. Her goal is to own multiple businesses and counsel young people who have mental and other problems.

Barrett thanked the students “for believing in themselves, that they can conquer anything and achieve their dreams.“ He also thanked the adults who are encouraging and supporting them.

The “I Have A Dream” program’s mission is to motivate and empower the students to reach their educational and career goals by providing a long-term program of academic, social and emotional support and tuition assistance for higher education, according to Program Director David Comer.

“This year was our first year executing a full after-school program where we provide tutoring, mentoring, homework help, extracurricular activities and a STEM (science, technology, engineering and mathematics) program,” explained Comer. Students participate from the time school ends at 2:30 p.m. until 5:30 p.m. on school days and on some Saturdays. Staff and volunteers also help teachers work with students in Clarke Street classrooms.

Every Tuesday after school since second grade, the now-seventh-graders have taken a bus provided by the Brady Corporation to the company headquarters at 6555 W. Good Hope Road. There, employee volunteers spend two hours tutoring the students, with whom they have developed close relationships.

The routine provides consistency, which Comer said is valuable to students who may not have as much stability outside of school.

Monthly field trips give students exposure to a larger world and allow them to envision more options for themselves. In middle school, students must earn the privilege of going on field trips, Comer said. Recently, a group visited Chicago’s Adler Planetarium.

Sixth-grader Allontay Haynes said he loves field trips and gym and is proud of his perfect attendance. “I come every single day,” he noted. Classmate Daishanell Thomas is interested in recording people’s voices and taking their photos. She might want to create a newspaper on a computer, she said.

“I Have A Dream” was founded in 1981 by New York businessman Eugene Lang. After learning about the high dropout rate at the Harlem middle school from which he graduated, Lang promised college tuition to every sixth-grader there who graduated from high school. In 1986, the national “I Have A Dream” Foundation was established to coordinate and expand the network of “I Have A Dream” sites, now numbering 32 in 13 states, Washington, D.C., and New Zealand.

Currently more than 3,500 Dreamers are on the path to college and 11,000 have completed the program.