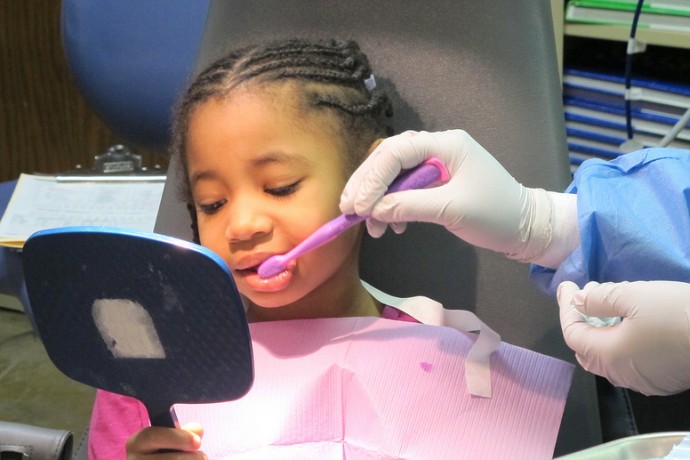 Dental hygienists taught them how to brush and floss, gave them a professional cleaning, sealed healthy molars and coated their teeth with the second of three fluoride treatments they will receive through the Smart Smiles program this year.

Parent Corey Wilson Sr. said he signed his son up for the program because he hasn’t been able to get a dentist to take him. “I wanted him to at least be able to see a dentist in some capacity,” Wilson said.

Wilson’s son Corey and fellow K5 student Arielle Williams are two of 200 K5 through eighth-grade students at Thoreau whose parents signed them up to participate in Columbia St. Mary’s dental care program. The forms were sent to all 560 students at the school, located at 7878 N. 60th St.

Smart Smiles teams visit schools two or three times per year. During the first visit, the children typically sit in chairs around a table in front of their own little station, which includes fluoride, gauze, a q-tip and screening mirror. The dentist moves around the table from child to child, examining their mouths as a hygienist records the number and condition of each child’s teeth. The children also get a  fluoride treatment to strengthen and protect tooth surfaces. 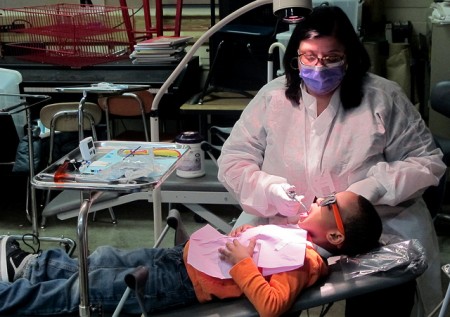 “If they go through the Smart Smiles program, even if they just have cavities that need to be filled, they can go to (the Seton Clinic). It doesn’t have to be urgent,” explained Lisa Linz, Smart Smiles supervisor. For most other patients, the clinic only offers urgent care, which does not include fillings or other restorative work.

Smart Smiles enlists a moving company to take dental chairs, compressors and other equipment from school to school for the dental hygienists and their assistants’ second visit. After performing a complete cleaning, they apply sealants and fluoride and the assistants demonstrate proper brushing and other care techniques to each child.

Hygienist Pam Prenger explained that sealants placed on the horizontal surfaces of molars, if applied when the teeth first come in, can last until children are in their 20s, when the incidence of tooth decay declines, she said.

For schools where a Smart Smiles team is able to start in the first half of the school year, students receive a third fluoride treatment.

Columbia St. Mary’s launched Smart Smiles in 2001. This year, the program will operate in 46 schools in which more that 90 percent of the students are eligible for free or reduced lunch. It will provide dental services to 7,000 children.

“The Centers for Disease Control and Prevention has said the greatest cause of absences from school is dental disease,” said Bill Solberg, director of community services at Columbia St. Mary’s. “We’ve found that 40 to 50 percent of the children we see have untreated cavities.”

Linz noted that people often don’t associate the health of the mouth with that of the body overall. But tooth and gum disease can lead to many other health problems, she said.

Infections caused by bacteria that get under the gum tissue can cause loose teeth, difficulty chewing and tooth extractions. Recent studies link oral infections with diabetes, heart disease, stroke and low-weight births,” according to the Centers for Disease Control and Prevention Web site.

While students can participate in the Smart Smiles program whether or not they have insurance, the program bills BadgerCare for children who are covered. In addition, Smart Smiles receives financial support from United Way of Greater Milwaukee, Wisconsin Seal-A-Smile, Delta Dental and the Columbia St. Mary’s Foundation.

Thoreau parent Christopher Williams said he wanted his daughter Arielle to participate in the Smart Smiles program to “make sure her teeth are healthy,” even though she recently saw a dentist. Arielle has no cavities and her teeth are coming in just fine.