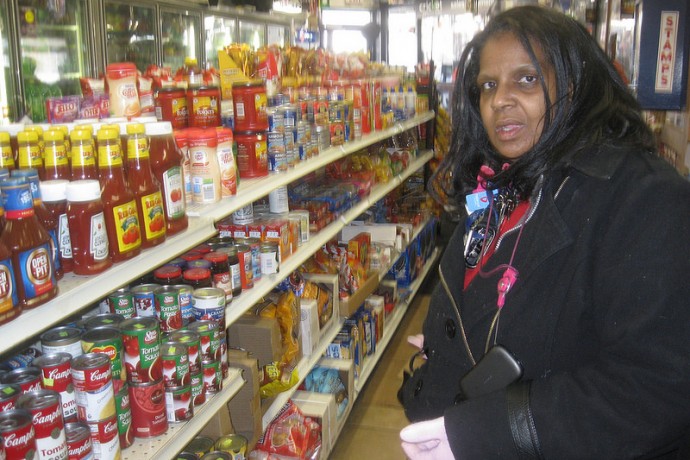 Gwendolyn Weathers-Ford’s hands and back no longer work. The 37 years of physical labor, first as a dishwasher in a Gary, Ind. restaurant when she was 12, and then a career spent as a nurse’s aide, has left her with braces on her hands and back.

“I had to lift people 400 pounds in the middle of the night, making sure that (they were) dry and … clean,” she said, standing near the condiments at City Spirits & Liquor, a convenience store at 1535 W. North Ave in Lindsay Heights.  “Baby, I’ve paid my dues.”

The 51-year-old is unable to work. To feed herself, her husband and a grandchild she cares for, Weathers-Ford relies on FoodShare, the state’s food stamp program.

But like many FoodShare recipients, Weathers-Ford is feeling the effects of two waves of cuts to the federally funded program. Weathers-Ford used to get about $240 a month from the program. Now she gets about $190.

“Point blank, we’re not going to make it,” she said.

The first wave came last November, when stimulus funding for the federal Supplemental Nutrition Assistance Program ended. The cut to SNAP, which funds state food stamp programs, decreased FoodShare benefits from a maximum of $668 to a maximum of $632 for a family of four. 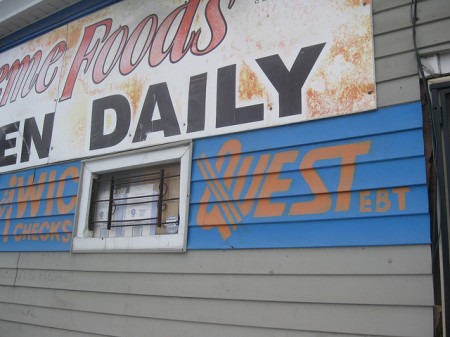 A sign outside of Supreme Foods, 3432 W. Lisbon Ave., advertises that it takes Quest, the FoodShare debit card. (Photo by Brendan O’Brien)

The second wave comes in the form of a new federal Farm Bill that President Barack Obama signed into law on Feb. 7. The Farm Bill cuts $8.7 billion during the next decade from SNAP.

The Farm Bill cut will hit hardest in 15 states, including Wisconsin, that use “heat and eat” provisions through the federal Low-Income Home Energy Assistance Program. The Farm Bill ends the provision that allows families receiving utility assistance to also get a standard $90 a month in food stamps.

The FoodShare cuts are especially unsettling to Weathers-Ford, who does not drive and thus must rely on public transportation to get to and from one of the few big box grocery stores in the impoverished parts of the city. As a result, Weathers-Ford regularly shops near her home at small corner grocery stores, where prices are higher and there are fewer nutritional whole foods than she would find in chain grocers, she said.

“We eat worse already. Do you look at the prices? This is overpriced, but we just can’t always get to the store so we have to compromise,” she said as her 62-year-old husband, Willie, manned the couple’s grocery cart outside of the store.

Poverty expert and registered dietitian Amber Canto looks at food security through the lens of access and availability of nutritious foods as well as whether poor families have the skills and tools, such as pots and pans, to be able to prepare healthy meals.

“Having less overall for food is going to be problematic for many people,” said Canto, who works at the University of Wisconsin-Extension. “It will put a strain on these households to meet their food budget.”

Research shows people who are on food stamps are more “food secure” than those who live in poverty and choose not to take advantage of the program. Overall, food stamps also alleviate poverty, Canto said. During the stimulus, an even greater effect was seen in the protection food stamps provided against poverty and food insecurity, said Canto.

SNAP benefit levels are determined by employment, income, family size and by the United States Department of Agriculture’s thrifty food plan, based partly on the lowest possible prices for whole food items.

However, SNAP program benefit levels do not adjust for different food prices in different locations, or for the eating habits of Americans, who tend to choose processed foods over making meals from scratch because of convenience.

“It takes a lot of time, effort and knowledge” to make it on food stamps, Canto said.

Milwaukeean Monica Lambert, 46, who works part time and goes to school full time to become a teacher, tries to feed her five children a healthy diet on a limited, fixed income.

Lambert and her son receive Social Security disability benefits. That, along with her income, amounts to about $1,400 a month. She also gets a “couple of dollars” from her children’s father each month.

“Every month I have a big giant headache, because I don’t have enough to pay for it,” she said. “I don’t live in the greatest neighborhood, but we make the best of it.”

A few months ago, Lambert was receiving about $100 a month in FoodShare benefits. Now that amount has shrunk to $80 a month, which helps her purchase canned fruit, vegetables and pasta meals. Her grocery list, which she makes out every two weeks, also contains crackers, peanut butter and hot dogs, but fewer fresh foods now that her food stamps have been cut.

“There are a lot of things at the (grocery) store I can’t get. I have to get what I can to stretch it,” said Lambert as she made bacon and eggs for a Sunday morning breakfast. “I do a lot of praying.”

The cuts in the federal food stamp program put pressure on organizations such as Hunger Task Force, which helps feed the poor by distributing food to pantries throughout the metro area.

“(Congress) is asking the citizens of the United States to go without food, which is pretty darn un-American,” said Sherrie Tussler, executive director of the Hunger Task Force.

She predicts the need for food will increase over the next several months as those who live in poverty will choose between meals and staying current on their utility bills.

Tussler said her organization is bracing for the end of the We Energies winter shut-off moratorium on April 15.

“It’s just like cut after cut after cut at a time when we are facing the frostiest winters we have ever been through and many people are worried sick about paying their utility bills,” Tussler said. “People are scraping corners and doing their best to get by.”