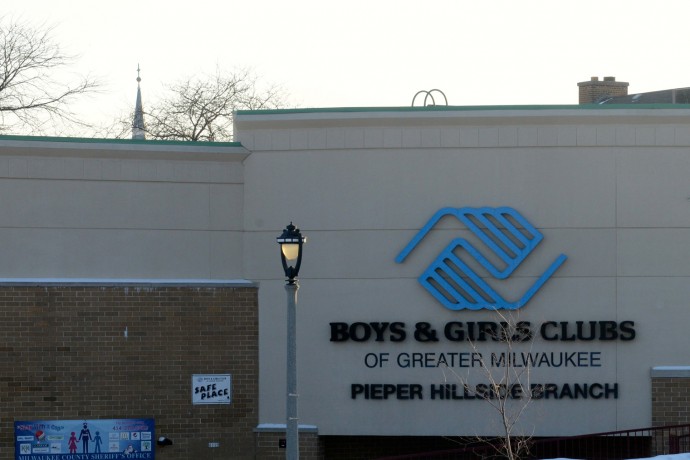 A new Public Policy Forum report is raising questions about the state of afterschool programming and YoungStar staff education standards in Milwaukee County.

The nonpartisan organization’s study, “Reaching for the Stars,” reveals that afterschool programs are struggling to meet staff education requirements set under YoungStar.

The resulting education gap is producing low ratings—and lowered state subsidies—for afterschool programs, fewer than 1 percent of which had received 4- or 5-star ratings as of June 2013.

The ratings are clear, according to researcher Joe Peterangelo, the study’s chief author, but their implications are not.

“Is it the case that these afterschool programs are of lower quality and their staff are not up to the standards we should expect?” Peterangelo said. “Or is this a case of a system based upon standards for a separate field that might need to be further calibrated for afterschool teachers?”

The report states that 72 percent of the 134 school-age programs in Milwaukee County evaluated by YoungStar received 2-star ratings. The Wisconsin Department of Children and Families (DCF) considers “high quality” programs to be rated 3 stars and above, according to an emailed statement.

Programs must be evaluated by YoungStar to receive Wisconsin Shares child care subsidies, which are tied to ratings. Programs with 4 and 5 stars receive 10 and 25 percent base rate increases, respectively. Two-star programs receive a 5 percent reduction.

The lower ratings have led to an overall decrease in state funding for county school-age programs, according to Peterangelo. 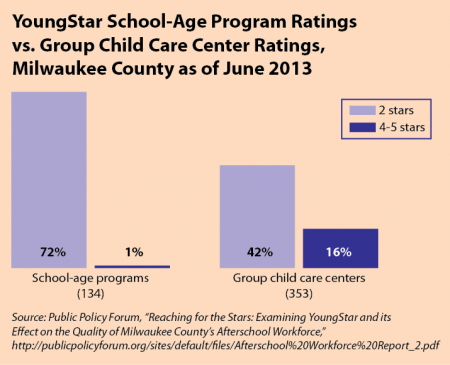 YoungStar launched in 2010. Originally focused on early childhood care, the system began evaluating afterschool care providers in 2012. The Wisconsin Department of Children and Families established its school-age criteria through the Wisconsin Afterschool Network, which includes organizations such as Milwaukee Public Schools (MPS) and YMCA of Metropolitan Milwaukee. The criteria were based on standards for group childcare centers, according to the Forum’s report.

“The requirements are roughly the same, if slightly modified,” Peterangelo said. “At the 3-star level, the standards are the same.”

YoungStar evaluates programs in four categories, including staff education. To reach the 3-star level, half of the teachers in school-age programs must have earned six credits in early childhood education or child development, according to the report.

Those standards are necessary and important, according to DCF.

“Staff training and educational competencies have a dramatic impact on the quality of an educational program,” a department spokesperson stated. “For our children to receive the early education that they need to be successful in today’s global economy, programs must raise their standards.”

Staff education is the primary reason why many county afterschool programs cannot reach 3-star status, Peterangelo said. According to the report, more than 80 percent of all teachers in the 2-star programs do not meet the education requirements for higher ratings.

That disparity may be the product of low-quality afterschool programs, Peterangelo said, but it might also mean that the state should reconsider how it applies early childhood care-based standards to afterschool programming for older children.

The two fields are very different, according to Dr. Cheryl Baldwin, who directs the Youth Work Learning Center at the University of Wisconsin-Milwaukee. “We know that achieving these kinds of expectations is often very challenging for afterschool programs,” Baldwin said. “I think that the credit requirements are a high bar for the afterschool program model.”

Unlike early childhood care services, afterschool programs typically rely on part-time, non-career workers with high turnover rates, according to Baldwin. The fields’ business models also differ, she added. Early childhood programs can bill for the entire day, whereas afterschool services can only charge for a few hours at a time.

“What it means is that it is very challenging for [afterschool] providers to invest in frontline workers for credit-based education,” Baldwin said.

The Forum’s report estimates that it would cost between $430,000 and $1.1 million to cover the tuition necessary to bring all of the staff in county school-age programs up to 4-star education levels.

There are multiple options available for area afterschool programs that seek to improve their staff education levels, according to DCF.

According to the Forum’s report, however, few of these options have been used for staff education in Milwaukee County. The report stated that none of the 111 county school-age programs that received $1,000 micro-grants between Sept. 1, 2012, and Sept. 1, 2013, applied the money to credit-based staff education, and only three teachers of school-aged children received TEACH scholarships during the federal fiscal year that started Oct. 1, 2012.

Despite those challenges, a number of programs across the state have improved their ratings. According to DCF, 46 afterschool programs improved from 2 stars to 3 between March 1, 2013, and March 1, 2014. 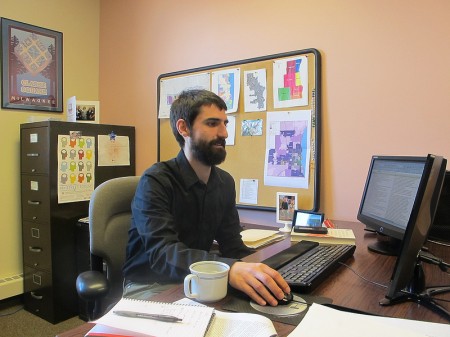 Researcher Joe Peterangelo of the Public Policy Forum authored the recent study of afterschool programs in the county. (Photo by Rick Brown)

In Milwaukee County, Boys & Girls Clubs of Greater Milwaukee (BGC) is succeeding. The majority of its afterschool programs have 3-star ratings and several are higher-rated—the result of “quite a bit of effort” on the organization’s part since 2012, according to Knutson.

MATC trained approximately 125 BGC staff, allowing most of BGC’S programs to meet or exceed 3-star criteria, according to Knutson.

According to both Peterangelo and Knutson, however, BGC’s approach may not be easily reproducible, due to WAT eligibility restrictions.

Additionally, turnover remains a continual issue for BGC, Knutson noted. “There’s a constant churn of new training and staff” that incurs thousands of dollars in training costs, he said.

Other organizations, such as the YMCA of Metropolitan Milwaukee, face similar struggles. According to the study, the agency operates 33 afterschool and early childhood care programs, 29 of which are rated 2-stars.

For the organization’s four higher-rated programs, staff education “poses the greatest challenge,” according to the report.

The YMCA declined to comment on its programs. In an email statement, an agency spokesman said in part that it would “continue to focus on ensuring all of our licensed programming achieve high ratings according to YoungStar’s measurement criteria.”

However, those criteria potentially limit YoungStar’s usefulness to parents trying to select high-quality afterschool programs, according to Peterangelo. “If there’s only a single program [in Milwaukee County] that is rated as highest-quality, how helpful can the system be for a parent trying to find such a program for their child?”