You are here: Home / News / Arts and Recreation / ‘Be Girl Project’ teaches leadership through urban arts
Share this... 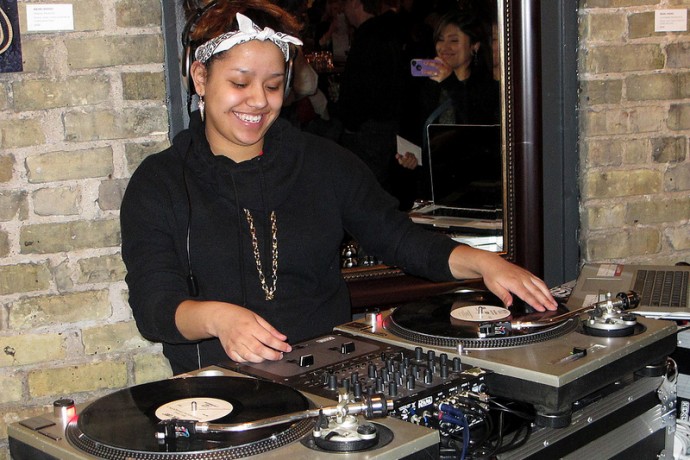 TRUE Skool teen Jaylen “DJaylen” Perez sets the mood with her music selections at the opening of the exhibit “Well-Behaved Women: Journeys to Fearlessness.” (Photo by Andrea Waxman)

Seventeen-year-old Jaylen Perez values the lessons she and her peers are learning about building healthy relationships, avoiding the repercussions of unprotected sex and loving herself first.

Though she had heard something about these topics before participating in TRUE Skool’s “Be Girl Project” workshop, she said, she and the other participants didn’t know “exactly what could happen or what we should know.”

“(Program Director Shalina Ali) informed us of a lot of stuff and we don’t really get that knowledge (anywhere else) because we don’t have sex ed in school anymore,” Perez said.

TRUE Skool’s Be Girl Project aims to nurture self-worth, social and emotional intelligence and critical thinking skills among girls age 14 to 19, according to its leaders. It teaches leadership skills, helps girls form friendships and matches them with mentors.

The Reproductive Justice Collective, located in a portion of TRUE Skool’s new Grand Avenue space, is a partner in the Be Girl Project.

Working with TRUE Skool on this project fits well with the collective’s mission to advance reproductive justice through helping youth to reach their full potential.

Launched last year, the project is expanding during TRUE Skool’s 2014 spring session, which started in mid-March.

The name “Be Girl” is a play on the Hip Hop term “b-girl,” a woman who has dance, art and music skills. “Be Girl” also alludes to one of the project’s goals, which is to give girls permission to “be girls” rather than internalizing the highly sexualized, unrealistically mature images prevalent in popular culture, commerce and media.

“Media tell us who we are supposed to be, what we’re supposed to look like, how we are supposed to act,” said project volunteer Katie Mullen. “We want to help these girls better understand how to look critically at that information that is bombarding them and not just take it at face value.”

Mullen, the founder and curator of the FROM HERE TO HER Artist Collective, has forged a connection between the two groups since she started volunteering at TRUE Skool in 2011. For the second consecutive year, the collective donated the proceeds of its annual Women’s History Month art exhibit to TRUE Skool. This year those funds will support the Be Girl Project.  The exhibit titled “Well-Behaved Women: Journeys to Fearlessness” explores similar themes of feminine norms and expectations and what it takes to grow beyond them. 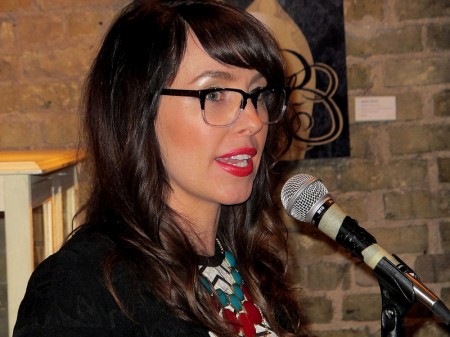 Mullen announced the launch of the enhanced partnership between the artist collective and the Be Girl Project at the event.

Noting that the two groups share a commitment to explore social justice issues through art, Mullen explained that for each member of the collective, art has been a positive force in dealing with “heavy things in our personal lives and in the world around us. (It) has healed us, empowered us, made us more self-aware.”

Passing that knowledge and experience to “young women coming up behind us” is one goal of the collective’s involvement in the Be Girl Project as teaching artists and workshop co-facilitators. “We also want to show (the younger women) the power of female-to-female alliance, of how much more we can achieve when we help each other,” Mullen said.

TRUE Skool has a parallel program for boys. During its first year, workshops sometimes engaged boys and girls together and addressed difficult issues including the use of words such as “bitch.”

Both projects kicked off last spring with a daylong event at UWM called “You Be Boy and I Be Girl,” which featured a panel discussion, interactive art projects and breakout sessions on gender issues in music, media and entertainment. It included nationally known speakers and Hip Hop artists and was attended by more than 250 high school-age youth, according to Mullen.

In addition to the Reproductive Justice Collective, program partners include the YWCA, Urban Underground, No Condom No Way, First Wave/UW-Madison and Still Waters Collective.