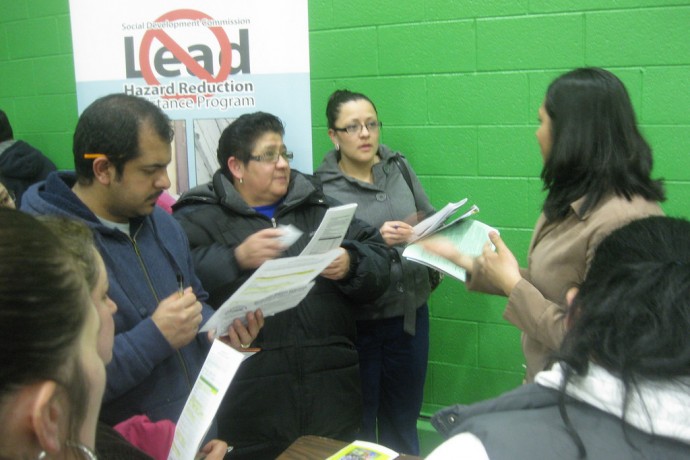 Stephanie Carter blames her porous windows for the frigid drafts that blew through her house this winter.

“You can sit in the house and actually feel the wind come through the windows,” Carter said. “The plastic on the windows really didn’t do much.”

To stay warm, the 42-year-old mother of three cranked the furnace until it stopped working.

“I had to wait until I got paid to get it fixed. We were all sleeping in the same bed, bundled up,” said Carter, who has owned her home for five years.

The problem drove her to go to the fourth annual Layton Boulevard West Neighbors Improvement Fair, where she was one of about 200 Milwaukee homeowners who learned about programs to help defer the cost of interior and exterior home projects, such as window and furnace replacement. 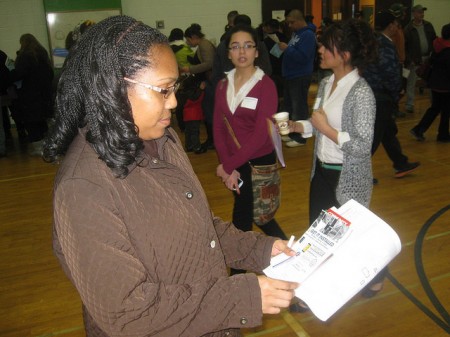 Stephanie Carter, a 42-year-old mother of three, asks for information about replacing her windows. (Photo by Brendan O’Brien)

“The fair has been a real successful way to get out the word. It creates a strong place where people can get a better idea of the different programs that are available,” said Kate Wolf, the home improvement coordinator at Layton Boulevard West Neighbors, before the event, held at Ascension Lutheran Church, 1236 S. Layton Blvd.

The Clarke Square Neighborhood Initiative and the Southside Organizing Committee also sponsored the fair, which consisted of 16 local organizations that offer assistance such as low-interest loans and grants.

One of the organizations that took part was Rebuilding Together Greater Milwaukee, which offers free home repairs and accessibility upgrades to elderly homeowners.

“People want to be in their homes. That’s where their memories are and that is where they have raised their families. That’s where they are going to do better and age better,” said Erin Goff, a project and logistics manager, as she manned the organization’s table filled with devices such as a sturdy hand rail and an extendable shower head.

Select Milwaukee also had a table at the fair, where participants learned of the financial services and assistance the organization provides, including a $14,500 grant that can be used to bring newly purchased foreclosed houses up to code and to make roofing and energy efficiency improvements.

“We heard from a lot of people who need loan modifications because their home is underwater,” said Elizabeth Ferber, a rehab specialist with the organization, who added that the event provides a forum where organizations can gauge the housings needs of the community.

For Kim Rodiez, 42, the event was an opportunity to learn what assistance is available for her dad, who needs to repair a rotting second-floor porch on his century-old duplex.

“Even if we could find just $200 towards it, that would be something,” said Rodiez, who lives in the upstairs apartment.

“We plan on staying there for a long time,” added Rodiez, who went to the fair with her sister Tracy. Tracy Rodiez lives in the downstairs apartment with her four children.

“I’m really surprised at all that is out there,” said Tracy, as she left the event with a fistful of pamphlets and applications.