You are here: Home / News / Arts and Recreation / New Bucks ownership not game-changer for ‘Fair Play’ campaign
Share this... 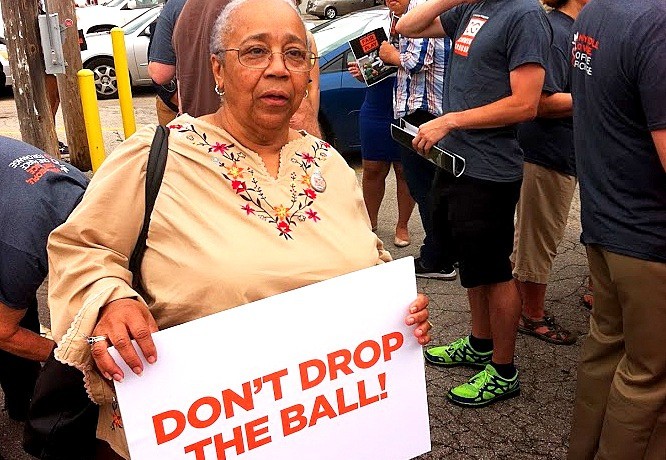 A community member makes her views known at an event to unveil a report by Common Ground on athletic and recreational facilities at Milwaukee County public schools. (Photo by Brendan O’Brien)

The recent sale of the Milwaukee Bucks will not alter a grassroots effort to persuade public officials that if taxpayer money is used to pay for a new arena, it should also pay to improve courts and ball fields at area schools.

Longtime owner and former U.S. Senator Herb Kohl announced on April 17 that he sold the NBA team to investors Wesley Edens and Marc Lasry for $550 million. The three pledged to chip in at least $200 million for a new arena, which is expected to cost at least $400 million, meaning the public may need to foot the rest of the bill.

Officials and volunteers of Common Ground’s Fair Play campaign voted earlier this month to support public funding for a new Bucks arena if a $150- to $250- million public investment is made to improve Milwaukee County public school outdoor athletic and recreational facilities, and to oppose the project if public money for these facilities is not included. 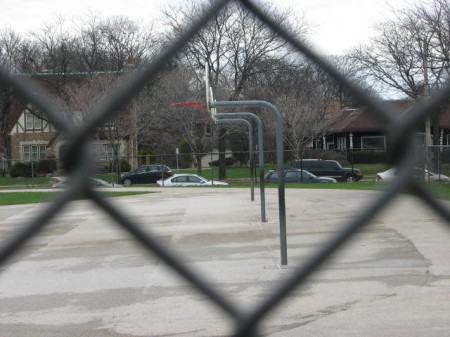 One of the three basketball goals lack rims at the Washington High School of Information Technology, 2525 N. Sherman Blvd. (Photo by Brendan O’Brien)

“As we have consistently stated, Common Ground is not opposed to a new arena. But if public taxpayer money is used to build a new Bucks Arena, we demand a say in how our money is used, and that means investing in our children through Fair Play. New ownership does not change that,” said Jennifer O’Hear, the chairwoman of the campaign, in a statement.

In June, Fair Play released a report showing two-thirds of the outdoor athletic and recreational facilities at 268 public schools in the county’s 38 school districts are in terrible, poor or fair condition. The Milwaukee Public Schools was one of 11 districts with facilities rated in the poorest condition, according to the report.

The Milwaukee Bucks had the NBA’s worst record during the 2013-14 season, winning just 10 out of 41 games at home. The team, which plays at the BMO Harris Bradley Center, also recorded the worst attendance in the league during the season.

The Metropolitan Milwaukee Association of Commerce created a task force in October to explore financing and enhancements for the metro area’s cultural and entertainment facilities, including the Bradley Center, which also hosts concerts, college basketball games, NCAA tournaments and Admirals hockey.

The arena, for which the Bucks have a lease until 2017, is owned by the public and receives tax support for its operations. The arena will need at least $100 million in investment to stay operational, according to MMAC President Tim Sheehy.

“The bottom line is that a new facility is a necessity to move forward with the NBA. Done right, it can be a game-changing development for the Milwaukee region but will need some level of public sector investment,” Sheehy said in a blog after the sale of the team.