For the ninth consecutive year, Milwaukee’s May Day march for immigrant rights wound its way from the heart of the Hispanic enclave to downtown, this time ending in a rally on the front steps of the Milwaukee County Courthouse.

The rally was held in response to an Immigration and Customs Enforcement (ICE) practice of detaining undocumented immigrants at local courthouses, including Milwaukee Racine, Dane and Ozaukee. The immigrant rights group Voces De La Frontera (VDLF) organized the protest

Leading up to the rally, hundreds marched in procession, through a slow, intermittent rain, demanding an end to deportations, comprehensive immigration reform and tuition equity for local undocumented students attending Wisconsin colleges.

Legislation that would have provided tuition equity for Wisconsin “dreamers” (undocumented students who aspire to go to college), introduced by State Rep. JoCasta Zamarripa late in the legislative season, was shot down. 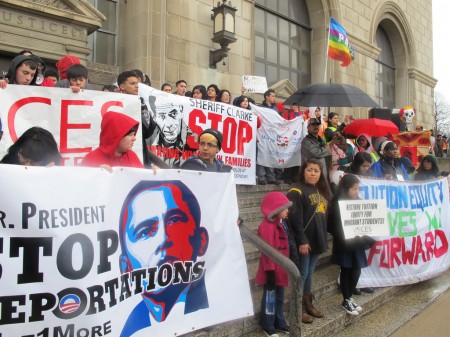 A May Day crowd estimated around 1,000 made their way to the front steps of the Milwaukee County Courthouse. (Photo by Edgar Mendez)

Currently, undocumented students who attend the University of Wisconsin or technical college must pay out-of-state tuition, which raises the price significantly. At UW-Milwaukee in-state tuition for 12-18 credits is $4,650, compared to $9,514 for non-residents.

Luis Jimenez, a student leader with Youth Empowered in the Struggle (YES), a youth advocacy group, said he was recently accepted at the University of Wisconsin Madison where he’d planned to study engineering.

“But a letter of acceptance was not enough to make that dream possible,” Jimenez told the crowd. He said the out-of-state tuition priced him out.

“Is that fair?” questioned Jimenez repeatedly, adding that his parents have paid their fair share of taxes over the past 10 years.

Jairo Galan, of Chicago, said he understands Jimenez’s plight. Galan, who’s about to graduate with a triple major at Marquette University, was undocumented. But, after gaining legal status in eighth grade, he was inspired to pursue a higher education. Galan, who participated in the march with three fellow students, said others deserve the same opportunity that he had to dream big.

“Access to higher education is the key to the future,” said Galan, who said Wisconsin is way behind when it comes to immigrant rights.

Zamarripa, who is running for reelection in November against Vincent Synowicz, said she won’t give up on tuition equity, or the other immigrants rights bills she’s sponsored. Synowicz is the former president of the Walker Square Neighborhood Association.

Zamarripa said she doesn’t understand why the measures she introduced weren’t adopted, adding, “These are dreamers who want to pay their way through college!”