You are here: Home / News / Arts and Recreation / Ballroom dance competition keeps students on their toes
Share this...

The fourth graders in the gym at Washington Park’s Westside Academy II held back their exuberance as best they could while waiting for their tap dance class to begin on a recent morning.  But despite teachers’ efforts to quiet the group, feet tapped, arms waved, and children talked, laughed, pushed and hopped in anticipation.

“At first, some kids are apprehensive because they don’t know how they’re going to do with (the dance class) but then they get going and they just love it,” said Sarah Carpenter, the students’ classroom teacher.

“We have very few behavior problems because they’re so absorbed and interested in what they are doing. They are really excited about it,” she added. Westside Academy II is located at 1940 N. 36th St. 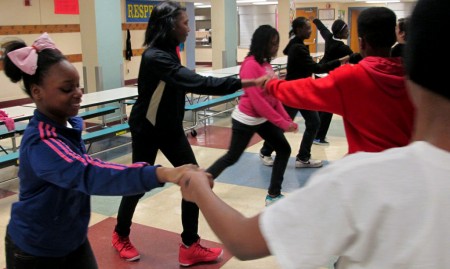 Since February, these students have been learning and practicing tap dance steps and routines for the Mad Hot Ballroom and Tap (MHBT) Competition slated for Saturday, May 17, at the BMO Harris Bradley Center.

It will be the eighth annual citywide MHBT competition since Danceworks initiated the program here in 2006. In addition to its community outreach programs, Danceworks, at 1661 N. Water St., includes a school as well as professional resident and youth performance companies.

Last year, students from 45 city schools participated in the 12-week program. All of the schools sent teams to the competition where they performed before an audience of 7,500. This year, 50 schools are involved in the program.

Westside Academy II sixth-grader Ronnie Rideout, who is taking ballroom dance classes, said he is excited about the competition. When he participated last year, “it was a little terrifying because there were a whole lot of people there,” he said. But once he started dancing, the fear went away and it was just fun, Rideout said.

Mad Hot Ballroom is based on a ballroom dance program initiated in New York City schools and featured in an award-winning 2005 documentary by the same name.  Danceworks’ Mad Hot Ballroom and Tap provides classes for students in fourth, fifth and sixth grades in central-city schools.

Through a 12-week course in ballroom and tap dancing, students participate in arts and physical education programming that is largely absent in the curriculum. The classes foster cooperation, perseverance, respect for self and others, increased confidence and other skills, which are measured by pre- and post-program surveys of students.