You are here: Home / Home / Carousel / New shelter offers women a chance to leave life on the streets
Share this... 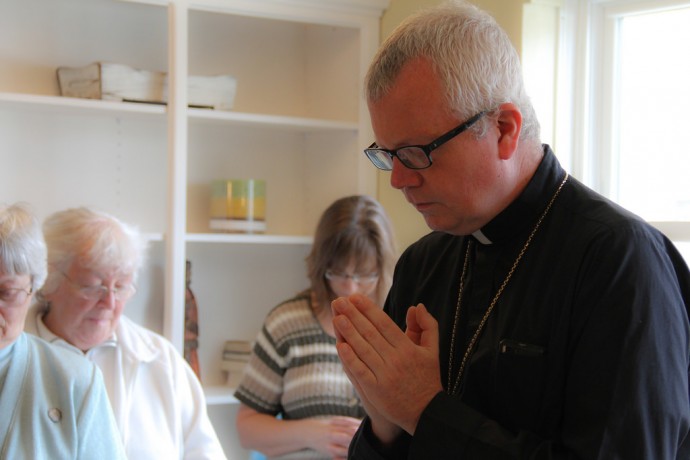 Auxiliary Bishop for the Archdiocese of Milwaukee Donald J. Hying leads friends and supporters of the Clare Community project in prayer at a celebration of the new women’s shelter. (Photo by Karen Slattery)

At the heart of the Franciscan Peacemakers’ Clare Community project is a newly renovated, bright and spacious three-bedroom apartment.

The home, awaiting occupancy, is located in a building that is part of St. Martin de Porres Catholic Church, 3114 N. Second St. The Franciscan Peacemakers hope it offers an escape for prostitutes working the city’s sex trade.

The Peacemakers recently hosted Bishop Donald J. Hying, Auxiliary Bishop for the Archdiocese of Milwaukee, and dozens of friends and supporters at the new shelter’s dedication.

Standing in the sunny, spacious living area, furnished with a formal dining table and inviting overstuffed furniture, the bishop blessed the new home. He asked the visitors to pray with him for the women who will live there as they move away from a life marked by hopelessness and despair. 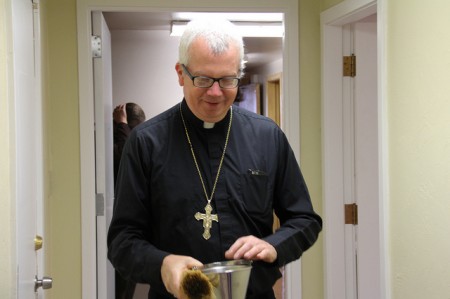 Hying called the project a “concrete expression of living the gospel,” adding that it offers the women “hope, dignity and love.” Following the prayer, the bishop sprinkled holy water throughout the rooms.

Peacemakers Steve Przedpelski and Carmen Mojica plan to fill the apartment by doing what they’ve done for years — travel the neighborhood in the nonprofit group’s van, bringing women bag lunches and inviting them to leave behind their lives of sex trafficking and drug and alcohol addiction.

Until now, they’ve had no place to offer the women as refuge while they transition to new lives.

Finishing touches are being put on the 1,400-square–foot furnished apartment that will provide women a safe home for two years while they reshape their lives. If they need jobs, they will be able to work in the project’s soap-making business one floor above, called Gifts for the Journey.

The program includes access to drug and alcohol treatment, education, financial training and spirituality. “We want to be holistic in our approach,” said Mojica. “We help them look at different things [about themselves] they may not have seen, things that were not nurtured while they were growing up.”

Przedpelski said the program will connect the women to therapists, enabling them “get at the sexual abuse and trauma issues that have happened throughout the years.”

Clare Community can house three women in the apartment. It partners with Project H.E.A.T. to shelter two more women, bringing the total to five. Przedpelski and Mojica modeled Clare Community on a similar residential program, called Magdelene, in Tennessee. 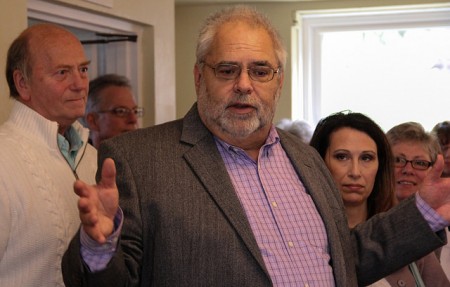 According to Przedpelski, the program’s creation reflects a two-year commitment by financial backers and volunteers. He said that when he asked them to provide the financial and other resources that the women would need to make the transition, program supporters quickly said they would pitch in.

Renovating the church space, which at one time served as a day care center and before that a residence for men studying to be Capuchin priests, required a major effort.

Commercial real estate owner Casey Gill volunteered as the contractor for the renovation. He said he called in favors from friends and associates to help with drywall, electric and new flooring.

Gill described their help as a “blessing,” adding that the finished work “warms my heart.”

Sister Alberta McBride, a member of the order of the Sisters of the Sorrowful Mother, offered her support for the project. She said nuns across the nation are pushing to get the issue of human trafficking on the public’s agenda, so that “when people see it happening, they will recognize it.”

Lucy Bloedorn, a social worker who stopped by to offer congratulations to the Peacemakers, said that while government programs are helpful, programs such as the Clare Community are a necessity. “We need to help people in a one-on-one way,” she said.

According to Przedpelski, the Peacemakers plan to expand the program.  He said they will continue to ask supporters for the resources needed to help the women move off of the streets, adding, “We would like to open another shelter in the neighborhood in 2017.”