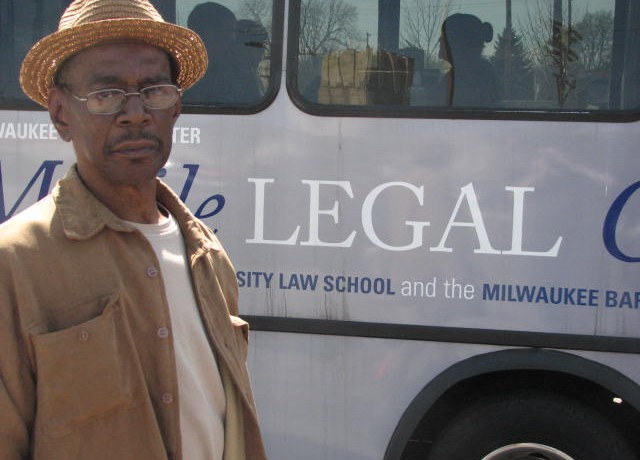 Stephen Dye waits to speak with a lawyer at the Forest Home Library during a free walk-in law clinic. (Photo by Brendan O’Brien)

Stephen Dye was driving down a side street on Milwaukee’s South Side when he came upon a block littered with potholes.

“There was so many that if I avoided one, I ran into another,” the 66-year-old said. “The day after, there was a loud thumping inside my car.”

That was March 11, 2013. Since then, Dye has been immersed in a legal battle with the city, which he believes should be responsible for the $397 in repairs he needed on his automobile due to the potholes.

Despite a small claims court judge ruling that he failed to show causality between the potholes and damage to his car, Dye has refused to concede, opting rather to attend the Milwaukee Bar Association’s recent Law Day event at Forest Home Library, 1432 W. Forest Home Ave. 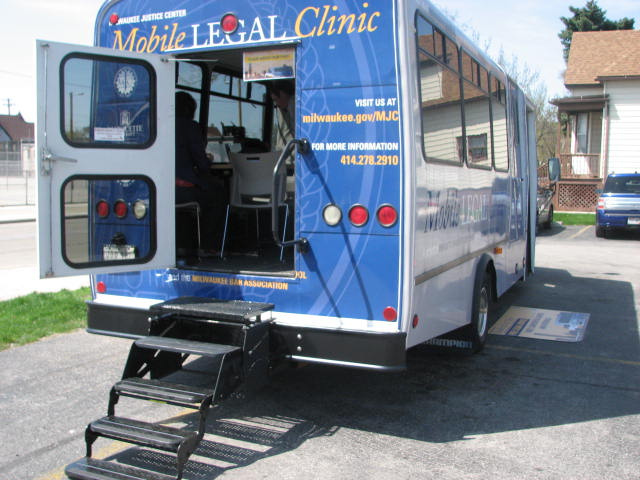 The Mobile Legal Clinic, a project of Marquette University Law School and the Milwaukee Bar Association, is parked in the lot at the Forest Home Library during a free walk-in law clinic. (Photo by Brendan O’Brien)

“I want to find out how I appeal a small claims judgment,” he said, holding a briefcase full of documents regarding his case as he waited in the library’s parking lot to speak with an attorney.

The event, held at four locations around the city, allowed residents such as Dye to discuss their legal issues free of charge with lawyers, who guided them through the complicated judicial system and legal process regarding such areas as small claims, property, taxes, wills and employment.

“People, a lot of times, are in situations where they just have a question and don’t want to pay for it,” said Britt Wegner, the director of the organization’s law referral service. “A lot of times, a question will clear up the whole situation or maybe they get just a point in the right direction.”

“They (were) all at libraries, which I find to be unintimidating,” she said. “To a lot of people, the legal system appears to be confusing, intimidating, scary and maybe even working against them.”

One of the driving forces behind the walk-in clinics was that they were free for people who would otherwise be unable to afford legal advice, Wegner said.

Laura Hankins was one of the 75 people who attended the clinics throughout the city. Hankins, a dental hygienist, came to the clinic at the Forest Home Library to inquire whether she has legal recourse against a thief who stole their daughter’s car, a 1999 Plymouth Breeze, and caused $3,700 in damage to it.

During a brief discussion with an attorney, Hankins and her husband Bill learned that they may have a case against the individual who allegedly stole the car and that they should obtain the police report to learn more about the incident.

“It was very informative…it put us in the right direction,” Hankins said.