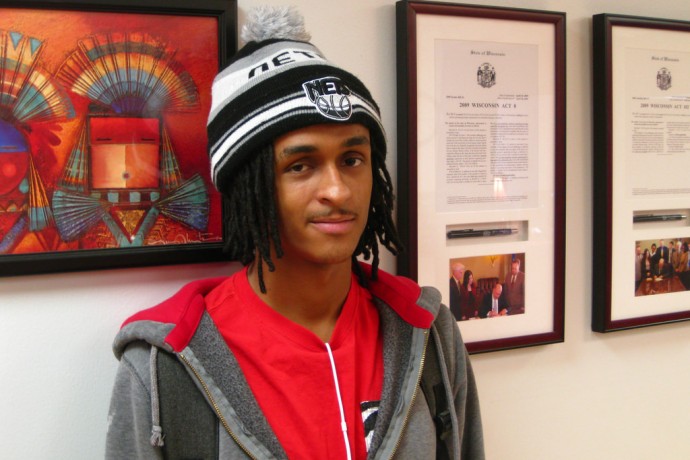 Alejandro Morales lost his driver’s license before he gained it for unpaid citations for non-driving offenses such as retail theft and disorderly conduct. (Photo by Rick Brown)

Some Milwaukee teens are finding their driver’s licenses suspended, sometimes before they get them, because of unpaid tickets for non-driving offenses.

Jaywalking, loitering and shoplifting are among the offenses that can lead to the two-year Juvenile Failure to Pay Forfeiture (FPF) suspensions.

The  Wisconsin Department of Transportation issued 16,945 such suspensions statewide in 2013, data show.

Some of those suspensions are ordered before recipients have gotten a license. As of January 2012, 308 Milwaukee teens had suspensions without licenses, according to a report from the Employment and Training Institute (ETI) at University of Wisconsin-Milwaukee.

“It may sound strange, but it’s referred to as ‘taking effect upon application,’” according to Chief Court Administrator Sheldyn Himle of Milwaukee Municipal Court. “If a person doesn’t yet have their driver’s license, DOT will enforce the suspension at such time as they apply for the driver’s license.”

More than 90 percent of the 308 teens in Milwaukee were African-American or Hispanic.

According to researchers such as ETI Director John Pawasarat, the FPF suspensions, combined with the high cost of mandatory driver’s education, are leaving many youths from poor neighborhoods unable to get licenses.

Numerous fines can lead to suspensions

Juvenile FPF suspensions arise from nonpayment of citations for driving and non-driving offenses.

When court cases result in a fine, individuals have a limited amount of time to pay them under Wisconsin law. If they do not, courts may order a driver’s license suspension that lasts two years or until the fines are paid. 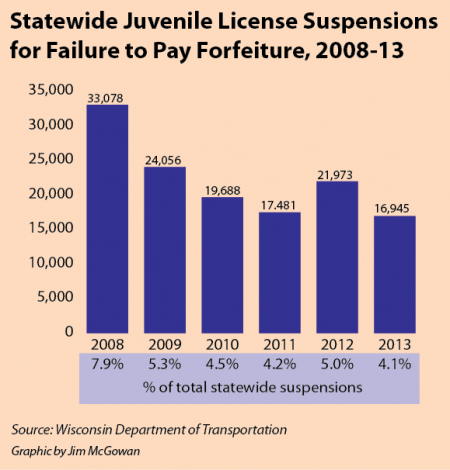 In Milwaukee Municipal Court, the suspensions are the usual outcome for nonpayment of fines for juveniles, which typically fall in the range of $70-90, Himle said. However, judges sometimes refer juveniles to community service with local organizations as an alternative to repayment, she added.

Unlike adult FPF suspensions, juvenile suspensions can be imposed for nonpayment of non-driving citations. Juveniles can lose their licenses for unpaid fines resulting from such offenses as curfew violations, disorderly conduct, loitering and retail theft, according to former Milwaukee city judge Jim Gramling.

“It was dumb stuff,” he said. “I got caught for retail theft and I had cigarettes. In one stop, I got three tickets.”

The incident was one of several in which Morales got tickets for non-driving offenses in Milwaukee and Greendale. At the time, Morales said, he did not go to court or pay attention to the notices he received in the mail. He said he thought the tickets would go away.

“I didn’t think they’d lead to a suspension,” Morales said. “I thought juvenile tickets were dropped at 18.”

Morales discovered otherwise when he tried to get a permit last year and found that he would have to pay all of his old tickets before getting a license. Unable to pay, Morales got rides from friends or took the bus. He sometimes drove without a license, and later received a ticket for that.

In September, Morales went to the Center for Driver’s License Recovery and Employability (CDLRE), having “realized the gravity of tickets and what they could mean.” With the center’s help, he has paid his tickets and aims to get his license within the month. A baggage handler at General Mitchell International Airport, Morales hopes to buy a car and possibly to seek a job at the airport’s ticket counter — one that requires a license.

According to Himle, juvenile FPF suspensions are the only option for Milwaukee Municipal Court, as the court cannot imprison youths for municipal violations and does not pursue wage garnishments in these cases.

That is an appropriate option, according to Gramling, a former municipal judge. He noted that judges felt powerless to hold juveniles accountable when state legislation temporarily removed their power to impose suspensions for non-driving offenses in the early 2000s.

“You don’t want to jail kids for municipal fines, but there was no way functionally to make the parents pay the forfeitures,” Gramling said. “Suspensions were the only ways of getting juveniles’ attention.”

FPF suspensions are a flawed tactic that hurts individuals’ chances to gain employment, according to Pawasarat, a researcher who authored a report on the driver’s license status of Milwaukee teens in 2012.

“Taking away licenses for failure to pay petty fines in municipal court is one of the most destructive policies we have in place,” Pawasarat said. “It explains part of the reason why things are so bad for central city residents who are looking for work.”

In the 2012 report, Pawasarat analyzed data on juvenile suspensions. He found that while the suspensions affect a small number of juveniles in Milwaukee—287 African-American and Hispanic teens as of January 2012, for example—those juveniles rarely get a license. 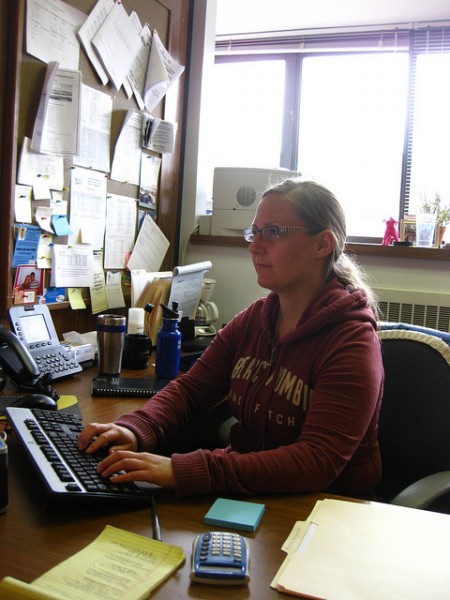 According to Pawasarat, juvenile FPF suspensions can have severe consequences for the employability of youths in poor neighborhoods in which gaining a driver’s license is “already a challenge” due to a lack of state funding for mandatory driver’s education.

“By the time they reach adulthood, most lower-income youths don’t have a driver’s license, and it’s not only a rite of passage but a requirement for pursuing employment when most jobs are outside of bus lines,” Pawasarat said.

According to Nichole Yunk Todd, policy and research director at Wisconsin Community Services, the suspensions can become a significant barrier to advancement for lower-income youth.

“Poor access to driver’s education and failure to pay forfeiture suspensions only compound the factor of poverty [for those juveniles],” Todd said. “If young people aren’t getting licensed, how are they going to go to work, to school?”

Many youths do not understand the impact of juvenile tickets, and some who get suspensions drive without a license, according to CDLRE Supervisor Angela Catania, who has worked with individuals with juvenile driver’s license suspensions.

“There need to be consequences in place, but [suspensions] can start kids off on a bad foot,” Catania said. “It can be a difficult situation to get out of.”

South Side resident Debby Montano, 41, discovered that reality when she received a ticket for driving without a license at 17, which led to a license suspension. Not understanding that she could still gain her license by paying the required fees, Montano said she went without one for seven years, often relying on public transit, which limited her options. Her sister also had her license suspended as a teenager.

“I didn’t even try to get a car because I wasn’t able to get a license,” Montano said.

Having regained her license years later, Montano is now taking her son to driver’s education classes to help him learn to drive responsibly.

“I don’t want the same thing to happen to him as well,” she said. “Everyone should have a license to make the streets safe for everybody.”