You are here: Home / Home / Carousel / ‘Guest volunteers’ return to The Gathering to serve others
Share this...

At the point in his life when everything was “topsy-turvy,” Jesse Berlik, 40, found stability and compassion at The Gathering.

Berlik volunteers five days a week at St. James’ Episcopal Church, 833 Wisconsin Ave., one of The Gathering’s three locations. When he was staying at the Milwaukee Rescue Mission, a homeless shelter, he came to The Gathering for the meals and the company. Now, he helps by cooking, dishwashing and cleaning.

“This gets me up in the morning and gets me going through my day. It keeps me busy,” Berlik said.

“It works out really well. Basically, at this point in my life, I don’t think it would be a good idea for me to work and have money in my pocket, you know – I’m an alcoholic.”

Berlik is what George Neureuther, breakfast coordinator at The Gathering, calls a guest volunteer – someone who benefitted from the services The Gathering provides and now comes back to volunteer. 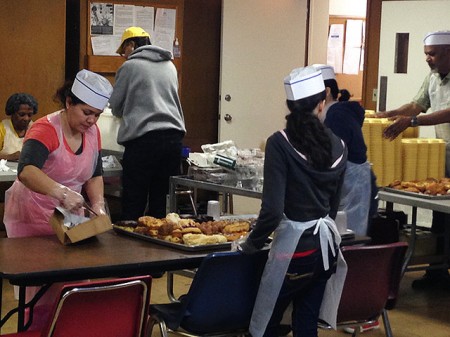 After talking with Neureuther over lunch a few times, Berlik decided to volunteer.

Recalling when he first came to The Gathering, Berlik said that he’d needed help before, “but this was the first time I’ve actually come to a place where they serve food for homeless people. I think at that point in your life, everything is so topsy-turvy that nothing really matters,” Berlik said.

According to Neureuther, 65 to 70 percent of the guests at The Gathering are homeless. They may be staying at a rescue mission, or on a friend’s couch or living outside. Neureuther said that most of the people who visit lack education, suffer from addiction, have been incarcerated or have a mental illness.

“For the majority of the guests, you can drive down Wisconsin Ave. and you wouldn’t know [that they are homeless] …We often think of the homeless as tired old grumpy people that are not very clean, and there are some like that, but the majority of them are just trying to get by in life like the rest of us,” Neureuther said.

According to the U.S. Census Bureau and the Hunger Task Force, an average of 20.9 percent of people in Milwaukee lived below the poverty level from 2008 to 2012. As of March, The Gathering had served 20,719 meals in 2014 a small increase from past years, according to Neureuther.

Rachel Sommers, 41, a volunteer at The Gathering for about a year, said summer is the busiest season at The Gathering, due to the nice weather and the fact that kids stop getting meals at school. She thinks homelessness and hunger in the city of Milwaukee are getting worse.

“Every time I go outside I see familiar faces … And I think sometimes people ignore that. That’s why I like coming here and paying attention to these people and giving them my time and talking to them, because that’s what they need. They’re human, too,” Sommers said.

Neureuther said volunteers talk to the guests, joke around with them, and help them have a good time at The Gathering.

“It’s very tough for a person to first start coming here and to have to say, ‘You know what, I can’t afford to support myself,’ so that’s why I like to use humor. It’s huge here,” Neureuther said. “Making them laugh and making them happy is just what they need. We don’t need to feel sorry for them.”

Berlik said the volunteers and guests of The Gathering make it a great place.

“It’s a really a cool group of people. We’re pretty much all in the same boat, I guess,” Berlik said. “The guests are awesome, and every volunteer has a good heart … I’m just glad this place is here.”