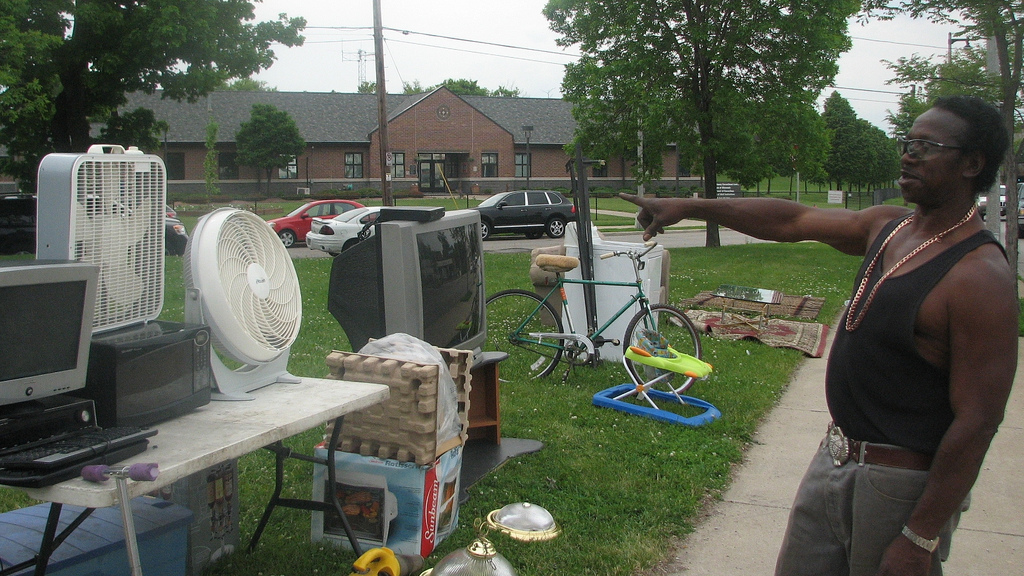 Shaky Jake points to a fan that he hopes to sell on the corner of Fond Du Lac Avenue and 30th Street. (Photo by Brendan O’Brien)

Thick, cord-like dreadlocks flowed out of the driver’s side window of the parked black and white van as raw rap music thumped from its speakers.

The van doors were opened wide signaling the curbside operation was open for business as two men, a 51-year-old ex-felon who goes by the name of Shaky Jake, and his friend Ken Walker, 40, fidgeted with an amplifier as they debated sports and politics.

A few feet away, a pair of mirrors leaning against a set of shelves reflected the bustling traffic of Milwaukee’s Sherman Park neighborhood. Resting nearby, two tube televisions, a couple of fans, a microwave and an aqua blue men’s three-speed bike sat in the warmth of the June day.

Maine, the soft-spoken 19-year-old with the dreadlocks, along with Walker and Shaky Jake, his uncle, make a living selling household wares, electronics and recreational items at the corner of Fond Du Lac Avenue and 30th Street.

“This is how we survive. It’s about survival,” said Maine, who declined to give his last name.

The men treat their curbside business as a job, waking up early in the morning, seven days a week, and hitting the road by 8 a.m. to find inventory they will sell later in the day. The trio buys their products at rummage sales or finds them discarded along roadways or in alleys and uses a wooden trailer and their van to transport the items to the spot along the busy roadway.

“It’s an alternative for us who can’t find jobs, a way to put food on the table. We’re just trying to make ends meet,” said Walker, wearing a black bandana and a white T-shirt.

Shaky Jake, with his broad shoulders, a wide smile and huge personality, is the CEO of the operation. He makes up for the lack of steady employment and financial resources with an infectious enthusiasm for the art of the sale. 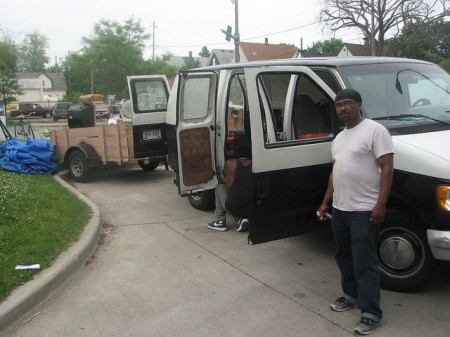 Ken Walker stands by the van that he and his business associates use to transport items to their makeshift store. (Photo by Brendan O’Brien)

“I buy from the rich to sell to the poor,” declared Shaky Jake wearing windshield-size sunglasses, a long gold necklace and a tight black sleeveless t-shirt that appeared painted onto his chest.

Shaky Jake, without notice, began imitating a fast-talking auctioneer, belting out what he had to sell in rapid fashion as he waved back to drivers who honked their horns, joyful to see and hear him in action.

Over the last three decades of doing business, Shaky Jake has built a network throughout the city of acquaintances who inform him of solid rummaging leads. Shaky Jake has also earned trust within the neighborhood and with his customers, some of whom request specific items they desperately need at a price that they can afford.

In return, he gets protection. No one dares to mess with Shaky Jake and his crew when they are running their curbside business.

“We’re just out here trying to making an honest living, trying to make a dollar like everyone else,” Walker said. “The key is visibility, a lot of eyesight.”

On the front end, the men are determined hagglers at rummage sales, driving prices down to their lowest possible point. When making purchases, they must take into account the limited amount of capital they have to spend on inventory, operational costs such as gas and maintenance on the van and logistical factors such as the finite amount of hauling space in their small trailer, Shaky Jake explained.

They also have a deep understanding of demand from their impoverished clientele, many of whom drive up in their cars, hop out and peruse the inventory on a regular basis.

“It’s good because you don’t have to go the store and spend all of that money and they aren’t trying to beat you,” said Dwight Thomas, who bought a television set for $30 from the curbside business a few years ago.

“They ain’t hurting nobody and they’re giving you decent merchandise and they didn’t go steal from nobody. You can’t ask for much more,” Thomas observed as he stood across the street. “It is what it is. It’s cut and dry.”

The entrepreneurs follow seasonal demand trends, selling plenty of fans in the summer and a lot of space heaters in the winter. Shaky Jake also relies on what he hears on the street.

“When people have their gas turned off, I buy the electrical stuff like this microwave,” he said, pointing to the lone microwave on his lot.

The men also watch the sales at big box stores such as Wal-Mart and Target to gain an understanding of the competition’s pricing trends.

Shaky Jake does not place price tags on his goods. He would rather engage the prospective client in a conversation about his products, giving him an opportunity to learn about their wants and needs along with their sensitivity to price.

“This fan could cost you $10. But if I see you sweat, it may cost you 50 bucks,” he said with a sly chuckle. “A sale is just a negotiation. Everything is negotiable all of the time; that’s why I don’t have the price. I leave it open.”

Like most of their customers, all three men live on the edge of a bleak financial cliff. Without the income they make from their curbside endeavor, they would go hungry or be homeless.

“I would be holding one of those signs that say ‘I’m homeless,’ ” Shaky Jake said as his mood quickly turned serious. “It’s tough out here.”

Maine spent time in jail after “doing stuff he had no business doing” such as breaking into houses when he was younger. Now, fresh out of high school and living on his own, he looks forward to one day attending college and becoming the first in his family to earn a degree.

“No matter how bad you’re off or how empty your pockets are, there’s always a way to come up legally without breaking into houses and stuff like that,” Maine said. “There’s a better way.”