You are here: Home / Home / Carousel / MPS students to experience the history of Freedom Summer firsthand
Share this... 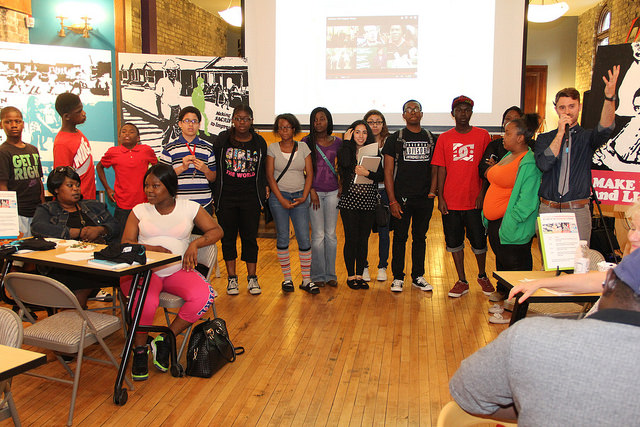 Sixteen MPS students soon will head to the South, where they will learn more about civil rights history. (Photo by Karen Slattery)

When Jackia Collins turns 18 years old in a few months, she will be able to cast a ballot. She said that if students and civil rights workers hadn’t fought for her voting rights in the summer of 1964, “I might not be able to vote.”
“What they did was so important,” she added.

Collins is one of 16 Milwaukee Public School students participating in the Freedom Summer Pilgrimage to celebrate the 50th Anniversary of Freedom Summer. On June 25, they will begin a weeklong trip to Memphis, Selma, Birmingham, Montgomery and Jackson, Miss., to retrace the events of the summer of 1964.

That was a violent summer when, among other things, three civil rights workers were murdered, Freedom Summer workers were beaten, more than a thousand were arrested, and churches and homes were bombed. The trouble arose when organizers made an effort to register black voters.

While on the road, students will see where the historic events unfolded and meet civil rights activists who participated.
Two chaperones, and other adults, including continuing education students from UW-Waukesha, will accompany the MPS students.

At Wednesday night’s fundraiser and send off at Arts @ Large, 908 S. Fifth St., the students had a chance to tell supporters about their upcoming plans and show some of the work they’ve done so far during their yearlong study of civil rights.
As part of the project, they created artwork, wrote poems and produced interactive maps.

In addition to Arts @ Large, sponsors include the Evinrude Foundation, Fellowship Open, the Milwaukee Arts Board and the Wisconsin Humanities Council, according to Ryan Hurley, a spokesperson for Arts @ Large.

Hurley said $5,000 is still needed to cover the cost of the student travel.

At the fundraiser, students heard from James Hall, Jr., president of the Milwaukee Branch of the NAACP, who reminded the students that voting rights are still not secure.

The incoming interim superintendent of Milwaukee Public Schools, Dr. Darienne Driver, helped Hall hand out journals to students so that they can record their thoughts while on the trip. She said she grew up in the South. “Stories from my grandparents and parents and their fighting our struggle were part of our everyday conversation,” Driver said.

She said that when she was asked to participate in sending off the students, the invitation gave her chills. “Thank God someone is remembering the stories,” she told the group.

Margaret Rozga, who began her civil rights work as a voter registration volunteer in Alabama, read students a poem about that era. The widow of the Rev. James Groppi has long been active in civil rights in Milwaukee. She, too, said she was “thrilled” that the students are interested in the civil rights story. 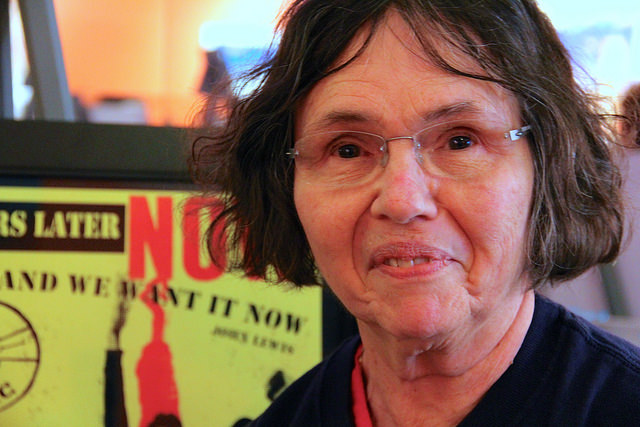 “Stories orient you toward a way to live,” said Rozga. “If students get these stories when they are young, they can live out their lives this way.”

Raquel Anderson, a senior who just graduated from MPS, said she is taking the trip to learn more about what happened that summer. Anderson said the trip will “help me to help others understand their past, our ancestors’ past, and what they have gone through and why.” Anderson plans to start college at Lawrence University in the fall.

While on the journey, students will be working with artists from UW-Milwaukee to help create artwork based on their experiences.

The art will be on display at Arts @ Large on Gallery Night, July 25.