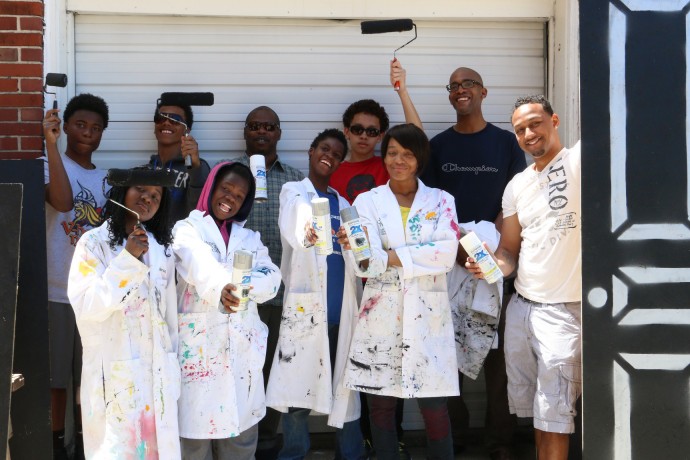 A group of Amani residents participate in ‘Painting with a Purpose,” a youth development program that decorates vacant houses. (Photo by Stanford Brookshire)

When 10-year-old Sierra Guyton was struck in the head by a stray bullet while playing on her school’s playground across the street from her home recently, Danell Cross was devastated.

“Everything that I have been doing and every hope that we have for our community was almost completely shattered at that moment,” said Cross, the Building Neighborhood Capacity Program (BNCP) coordinator in the Metcalfe Park neighborhood, where the shooting occurred.

But Cross said she was heartened by the community’s response to the tragedy. Cross organized a neighborhood call to action on Memorial Day that brought together hundreds of residents, as well as leaders of BNCP’s partner organizations and police officers, to stand against such violence.

“Out of that challenge, the support that I needed came up,” said Cross. “Together (we made) a statement that we are not happy with what’s happening in our community, we are not complacent about it, we are not tolerant of it, and we want to be a part of making a difference.”

The community’s willingness to “take on the knowledge that we are part of the change” helped Cross “get back up and keep moving,” she said.

Metcalfe Park is one of two distressed Milwaukee neighborhoods selected in 2012 for an 18-month grant from BNCP, a program of the White House Neighborhood Revitalization Initiative. The grant has been extended for another 18 months, according to Susan Lloyd, executive director of the Zilber Family Foundation, a BNCP funder and partner. 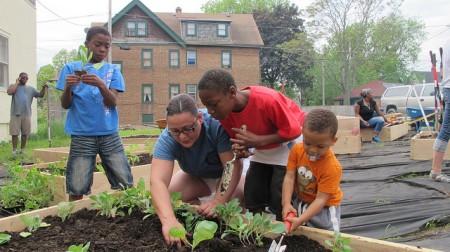 John Kordsmeier, president of the Northwestern Mutual Foundation, another funder and partner, says the best evidence of BNCP’s success is that the application for the extension was granted and a third neighborhood will be added.

According to Kordsmeier, the challenge in the second part of BNCP is to ensure that the neighborhoods are capable of providing self-sustaining change. “How do you work with partners to sustain gain? That‘s where we are committed to focusing our attention,” Kordsmeier said.

Leaders of the program in both neighborhoods acknowledge that the work is slow and difficult but say they have made progress. Both communities have seen an uptick in resident engagement and improved relationships with the Milwaukee Police Department, the lead agency in the federal grant. And both are working on ways to engage young people in their neighborhoods in positive activities that will promote their growth into healthy adults.

Inspector Mary Hoerig of the Milwaukee Police Department said it has been “quite amazing and challenging” for the police department to be part of BNCP at this very first stage. While the police are used to going in and solving problems, now they need to lend support to help residents solve problems. “We are learning to partner in a helpful way, as we go through the process,” Hoerig said.

Hoerig sees BNCP as valuable in many ways, including its ability to bring the resources of so many entities to bear on the problems of a single neighborhood. The opportunity to employ coordinators whose main focus every day is to figure out how to connect a neighborhood with the right services is also valuable.

“I don’t know how you could do that without a grant like this. There’s just no money to do it,” Hoerig said.

In Metcalfe Park, Cross has worked with other residents to create a governing structure in the form of a steering committee made up of residents and representatives of partner organizations including the Zilber Family Foundation, Northwestern Mutual Foundation, Children’s Hospital of Wisconsin, Gorman & Company, Inc., Boys & Girls Clubs of Greater Milwaukee and Safe & Sound. 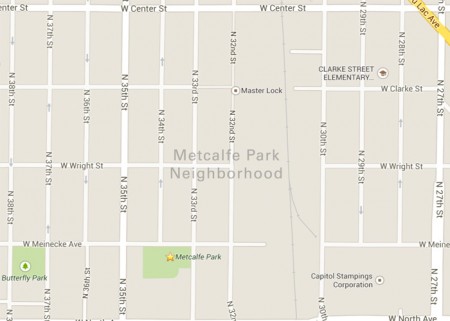 In addition, formation of the most engaged residents into the Metcalfe Park Community Action Team (MPCATS) has boosted participation in grassroots efforts to spark change. MPCATS is working with youth to beautify the neighborhood, learn urban agriculture, and connect with seniors through community gardening.

Initially coordinated by Cross and Sara Bauer, working with the Next Door Foundation as the anchor agency, Metcalfe Park decided in March that resident leadership was able to work independently, ending the partnership with Next Door. Bauer left her position in April and Cross expects to announce her replacement this week.

One of the initial projects for both neighborhoods, according to Lloyd, was to gather information door-to-door in a survey of residents to get a feel for the level of trust in   their neighbors. Metcalfe Park also conducted surveys to find out the residents’ greatest concerns and to prioritize them.

Through a series of focus groups, the community identified safety as its area of most concern. “And safety is really impacted by our young adults. We felt that they have some disruptive behaviors that are making the community unsafe,” Cross explained.

Helping young adults, ages 18 to 24, to solve the problems that are barriers to becoming healthy, successful adults has become Metcalfe Park’s central focus. The community has developed a list of solutions and is in the process of engaging a group of 17 young adults in taking leadership roles in this effort. Since Metcalfe Park has no community center to house community initiatives, establishing such a center may be one part of the solution, Cross said.

Cross cited the work of Groundwork Milwaukee as one of Metcalfe Park’s most beneficial partnerships so far. Even though its program originally was designed for younger children, Groundwork listened to what the community has said about the needs of its young adults and has shifted its program to address those needs, Cross said. Groundwork is preparing to hire 10 young adults for 10 weeks to install rain gardens.

The Dominican Center for Women, the BNCP anchor agency in Amani, has been working with residents for many years, originally serving as a women’s spiritual center. In that role, the center’s founders heard from women in the community that they needed literacy and education and wanted to become homeowners. 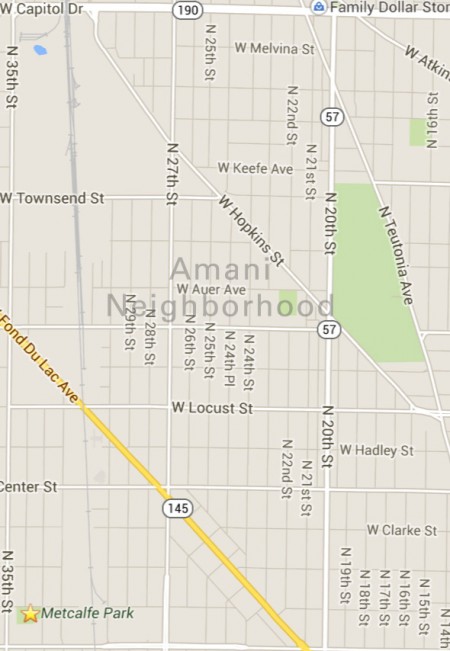 Led by those resident interests, the Dominican Center arranged for literacy and GED classes, as well as lead and asthma abatement services. Eventually two resident groups evolved to address community issues. “The Dominican Center was doing what BNCP is doing, but on a smaller scale,” said Sister Patricia Rogers, executive director of the center.

To meet the community’s needs, BNCP advisors said the center would have to do more, and the only way is by building the capacity of residents, Rogers said.

Rogers cited a number of successes Amani residents have achieved, including more than doubling the core group of active residents from about 20; increasing resident involvement in key government decisions about the neighborhood, such as the redesign of Moody Park; and encouraging police and residents to form relationships outside of crisis situations.

The biggest challenge is making sure that the little successes continue. “If we go too long without residents seeing something happening, they’re going to lose interest because that’s the way it’s always been. You have a big boom and nothing happens,” Rogers said.

Amani has had three interim coordinators since BNCP’s first coordinator, Denise Wooten, left in July 2013, said Rogers. Architect and housing specialist Fatima Benhaddou, who is working with the Dominican Center as a consultant, is filling in while the search for a permanent coordinator is underway. Rogers expects Amani to have its new coordinator in place by early July.

Residents in Metcalfe Park and Amani have joined with Lindsay Heights residents to design a community leadership training program to build residents’ practical skills. The program will teach community members how to run meetings, deal with resistance, get in the door with elected officials, and hold themselves and neighbors accountable, among other skills. They enlisted Cardinal Stritch University to teach the program beginning in late July. A group of core members from each neighborhood will take all of the classes and any interested resident can take individual classes.

Darlene Russell, senior program officer at Greater Milwaukee Foundation, a funder and founding partner of BNCP, said the program has expanded her ability to bring together grantees to strengthen the impact of the foundation’s grants. For example, Russell connected the Wisconsin Humane Society with Amani neighbors to enhance their involvement in adopting and caring for pets.

Russell also said that BNCP is a trailblazer in boosting resident engagement and raising up resident voices. Residents visit the foundation now to participate in meetings and stay to help with foundation projects. Recently 10 or 12 residents of Metcalfe Park and Amani helped ensure that a new small grants application was “resident friendly” in its wording and availability. Residents will also serve on the grant review committee.

She said she was impressed to see that the BNCP in Metcalfe Park, under Cross’s leadership, was able, in a very short period of time over a holiday weekend, to organize the partners to hold the Memorial Day rally. She was gratified that they were able “to begin to raise up the importance of people who live in the neighborhood taking a much more active role in establishing the norms that should govern the behavior of people in the community.”

“It’s a promising sign of the strength of community engagement that’s possible when … people who live in the neighborhood … step up and exercise their leadership skills on their own behalf,” Lloyd said.