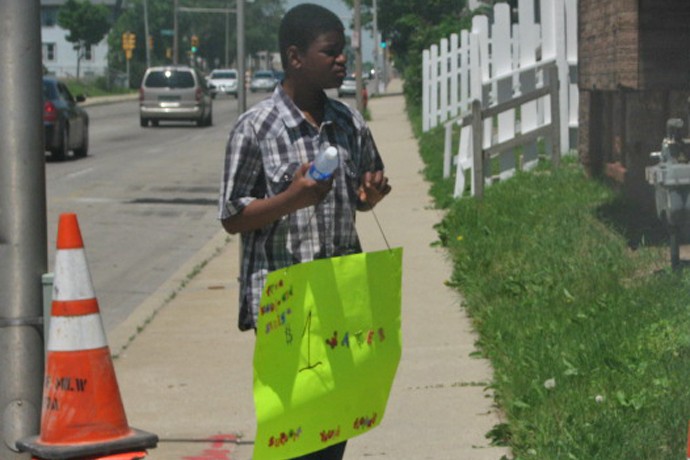 Otis Lynn (center) and his friends seek customers on the corner of Hadley and 35th streets in the Sherman Park neighborhood. (Photo by Brendan O’Brien)

Otis Lynn set out to triple his investment.

Hoping to profit from the oppressive heat on one of the first hot, humid days in Milwaukee this summer, Lynn bought a case of bottled water for $8 at a local grocery store.

The 14-year-old dumped the 24 bottles into a cooler packed with ice, made a sign on a bright neon yellow poster that read “$1 Water” and gathered a few of his friends to help him peddle the water to passersby on the corner of Hadley and 35th streets in the Sherman Park neighborhood.

“Water for sale. Get your water,” the boys roared as cars whizzed by and one of their friends glided around the intersection on rollerblades with two bottles of water raised up above his head, which glistened from sweat.

“We need the money,” Lynn said, standing on a corner of the intersection, hold up water bottles, smiling and waving to passing motorists.

With the neon sign hanging from string around his neck, Lynn, who towers over his friends, explained that he got the idea to sell bottles of water on the street when he saw a similar operation outside of a local Wal-Mart a few weeks earlier.

Lynn financed the operation while his friends helped sell the water on the busy street. For their work, they get part of the profits.

“It’s nice to share. They’re all my friends,” he said.

With the profits, the boys planned to buy snacks such as nachos and sweet drinks at the nearby corner store and maybe a video game or two if they make enough money.

“We’re going to split it up and buy stuff,” Lynn said as motorists occasionally honked their horn and waved back.

Earlier this summer, the boys made about $50 after two or three hours of selling bottled water on the street. The boys plan to continue their water-selling operation “when it’s extra hot,” Handley said.

Spending money is tough to come by in Lynn’s neighborhood, where he lives with his mother, father, younger brother and older sister and where about a quarter of the adults are unemployed and more than 40 percent of the occupants live in poverty.

“This is the hood…but I (do not) try to focus on that,” said Lynn’s mother, Tressi Johnson, a nursing assistant, as she relaxed on the porch of the house she has owned for 12 years in the 2700 block of 35th Street, down the street from where her son sells bottled water.

Johnson has warned her son to watch out for kids who may try to take advantage of him. She also has implored Lynn to save some of the money he earns.

“He has the mind to save it, but he goes and junks it up like any kid,” she said. “I am telling him to put some money away…I tell him when he grows up, he has to learn how to be independent, learn how to take care of himself and learn how to earn an honest dollar.”

Ironically, it’s against city ordinance for kids to be selling bottled water on the street. Nevertheless, adults in the neighborhood appreciate the boys’ entrepreneurship.

“I prefer seeing them do this instead of living a life of crime. At least they’re getting it honestly,” said Victor Butler, 47, as he walked down the street across from where the boys were selling the bottled water. “This will encourage them to go further and do things that are positive…instead of snatching a purse or doing a burglary.”

The 47-year-old ex-felon knows all too well what happens when a young man makes the wrong choices early in life. Butler sold and used drugs when he was younger, earning him nine years in prison and another 23 years on parole.

“I tell them not to be out here doing something you have no business doing,” he said.

Lynn wants to play running back in the NFL or, if that does not work out, be a businessman. But before he grows up, Lynn wants to enjoy summers like any other kid, going to the pool and the park and buying treats with his own money.

“I am very proud of him, very proud,” his mother said.