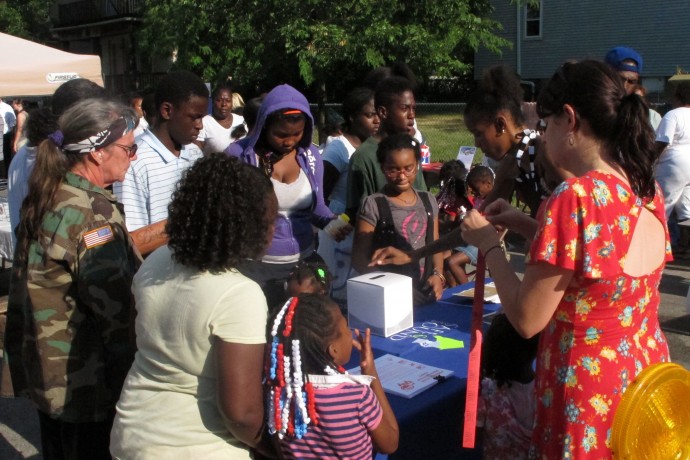 Metcalfe Park residents gathered in an empty lot for an outdoor movie night in July 2012. (Photo by Alec Brooks)

Community activist Leilani Lopez has been hired as co-coordinator of the Building Neighborhood Capacity Program (BNCP) in Metcalfe Park.

Danell Cross, coordinator of the program since it was launched here in January 2012, said that Lopez stood out from a field of 18 applicants because it was clear that “she has a service mentality… and understands that a lot of the work that we do has to do with race, class and power.”

“They affect everything, all of the work that I have done in this community,” Lopez wrote in answer to a question on the application. One example she cited was the absence of Hispanic culture in her education. In school, Lopez always tried to highlight the contributions of Hispanics, according to Cross.

“That mirrors one of the challenges we have in (Metcalfe Park’s) school settings, that our young people don’t learn enough about their culture, which we believe impacts them in a negative way,” Cross added. 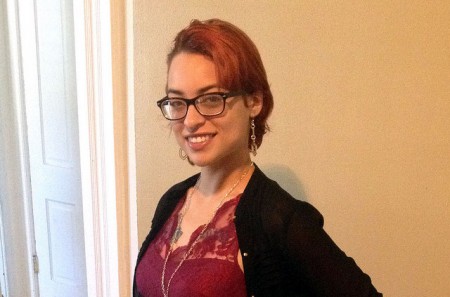 Neighborhood resident Lanice McGee, a member of the team that interviewed candidates, said that Lopez has had a lot of experience with diverse people. “She was very vocal about how to get residents involved and take leadership to make the community better,” McGee said.

Lopez, 28, is a Milwaukee native who grew up in a number of central city neighborhoods. She graduated from the University of Wisconsin Milwaukee with a bachelor’s degree in education policy and community studies. She also earned a master’s in cultural foundations of education at UWM. Married with four children, she lives in Concordia.

Describing herself as outspoken and forward, Lopez said she has found that some organizations “aren’t used to that and are actually afraid of people having power.”

She was attracted to the BNCP position, she said, because it offers the opportunity to do the work she loves.

“I really believe in people having power, not just … wealth but also political power, power to make change. I think there’s a lot of hopelessness and a lot of giving up (among) people and I just want to be involved in processes where ‘we the people’ get together and build our own communities with assistance, (but) not with leadership or guidance from outside sources,” Lopez said.

Lopez previously worked at Penfield Children’s Center as a liaison between the families of young children with disabilities and service providers. Prior to that she worked with students from elementary school to adulthood in academic, computer skills, recreation and athletic programs through UWM, Milwaukee Recreation, and other organizations.

Cross noted that she and Lopez have complementary skills. Not only does Lopez bring knowledge and passion, she is focused and she’s a detail-oriented planner, Cross said.

Lopez is very comfortable in the neighborhood and she has already connected with young adults, who are the focus of the Metcalfe Park program. “She already knew families in Metcalfe Park, including some who live across the street from me,” Cross said.

Metcalfe Park and Amani are among eight neighborhoods in four U.S. cities selected for the BNCP program. The Milwaukee program has been extended for a second 18-month period and a third neighborhood will be added.

The BNCP is part of the White House Neighborhood Revitalization Initiative, which is focused on empowering local communities to transform poor neighborhoods into neighborhoods with opportunities that support the well being of children and families.