You are here: Home / News / Arts and Recreation / Kids, parents pass on parks, playgrounds in favor of street hoops
Share this... 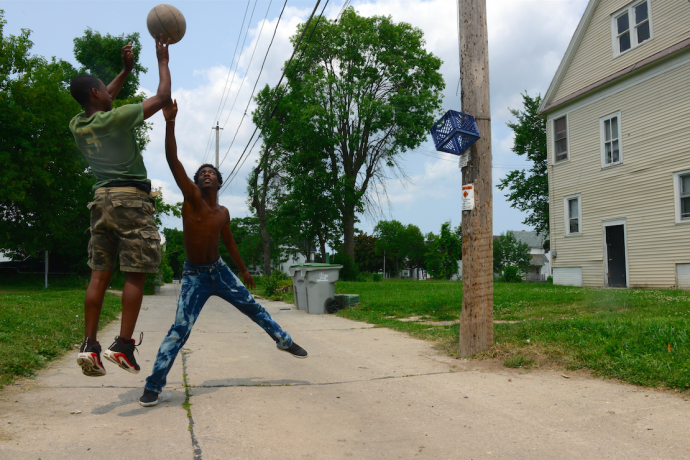 Deonta Grimes, 13, takes a jumper over his cousin Latravius Gregory, 16, during a pick-up game. (Photo by Sue Vliet)

Between a short chain link fence and a two-story house, four adults sat on a cracked cement sidewalk in bright beach chairs as they drank cans of cold beer.

Their chatter came to a dead stop as one of the men pointed and nodded down the 2800 block of 21st Street.

All eyes turned to an adolescent boy who, in the middle of the narrow roadway, dribbled a basketball between his lanky legs and passed two overmatched defenders toward a wobbly basketball rim where he raised up and dunked with authority.

The net-less rim shook violently, making a clanking noise that echoed against parked cars, brick facades and vinyl siding as the four adults howled and hollered in admiration, raising their drinks toward the cloudless blue sky in honor of the young ball player.

“There he goes again,” one of the men said as the youth dominated a game against his younger and shorter opponents.

The pick-up game repeats itself each afternoon when the kids on the block place the rickety, bent basketball goal against a curb, facing the street. The fiercely competitive games continue deep into the summer evenings to the delight of neighbors and parents, who appreciate the action and the ability to keep a close watch on the children. 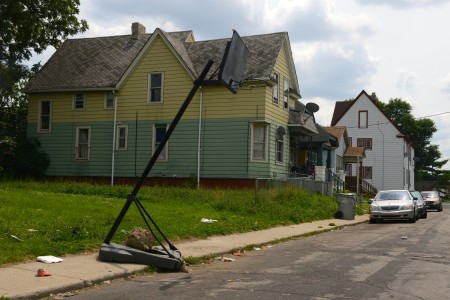 A basketball goal sits at the corner of 13th Street and Groeling Avenue. (Photo by Sue Vliet)

“They feel safer because they don’t have to worry about something happening at the park or the playground,” said Damon Richmond, 34, whose children play basketball on the street in front of his house. “We can come outside and watch all the kids and maintain them if they are getting too rowdy or arguing with each other.”

Richmond said this summer he is even more reluctant than in summers past to send his kids to the parks and playgrounds after 10-year-old Sierra Guyton was wounded during a shooting at the playground at Clarke Street Elementary School on May 21. The shooting of Guyton, who died on July 13, is a stark reminder for Richmond of the random nature of deadly violence.

“When we are sitting at our kitchen table and we hear gunshots, whether or not they’re our kids out here, we tell them to come in the house,” he said.

The game that unfolded behind Richmond was briefly interrupted when a driver zoomed down the street through the makeshift basketball court, making the players scatter to the curb, and then again when a pass ricocheted off a player’s fingertips and bounced down the street.

Similar street hoop games unfold throughout the streets and alleys of Milwaukee, where players of all ages regularly place hoops outside of their homes in the roadway, which serves as a court. Some hoops are basketball goals, bought at “big box” stores, while others are large buckets or plastic crates with the bottom cut out, attached to a utility pole with wire or nails.

“We’re bored. We did it for the little kids who don’t go to the park,” said a shirtless Latravius Gregory, 16, after he nailed a blue crate to a wooden pole in a dusty alley behind his house near Browne and 30th Street, in the Midtown neighborhood, where about a dozen kids gather each afternoon to hoop.

“It gets real, real competitive,” he said during a brief break from a game of one-on-one as sirens blasted a few blocks away and a hungry dog yapped in a nearby yard.

As Latravius dribbled around his younger cousin, Elliot Brown, Latravius’ father, attempted to usher the boys back inside to do their Sunday chores before they went for their weekly haircuts.

“I actually did this when I was little and as a teenager,” said Brown referring to his son’s ingenuity building the basket.

Jeffrey and Brenda Hardy set up a hoop in back of their house in the 2400 block of North 34th Street where their children and neighbor kids can come play basketball.

“I can’t take my kids to the park; it’s too dangerous. There are guns at parks. We do it to be able to watch them,” Jeffrey Hardy said, before returning to a pick-up game with neighborhood kids and his 12- year-old son Jeffrey Jr.

Zoinishiayia Crape, 29, the couple’s daughter, recounted how when she was a child she lost two friends who were caught in crossfire while they played basketball in public parks.

“Things happen in a blink of an eye and that’s not a blink-of-an-eye distance,” Brenda Hardy said, referring to the courts at Metcalfe Park, adjacent to her house. “(Here) there’s no cursing. There’s no fighting. There’s no disrespecting.”