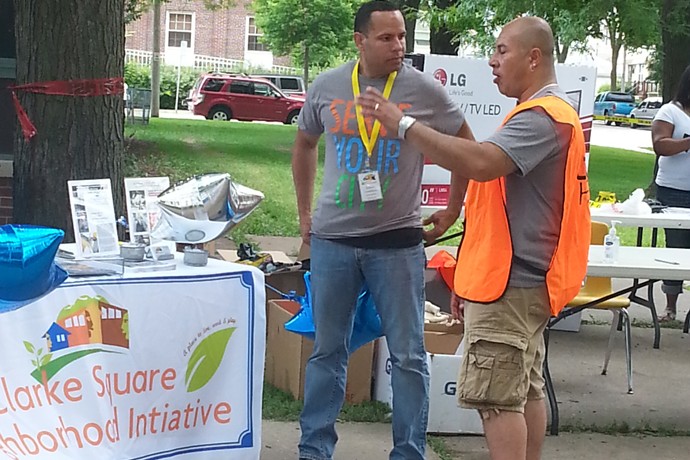 Anthony Mercado was a street kid. “I used to deal drugs and smoke bud at this park,” he recalled while preparing to help clean up Clarke Square Park. “I wanted fast money and it got me in trouble,” he said.

Mercado, who spent 10 years in prison, turned his life around, and now he and his wife, Linda, own a home near the park.

On a recent Saturday, Mercado and 300 other volunteers, Clarke Square residents and representatives from community organizations participated in a neighborhood beautification effort. 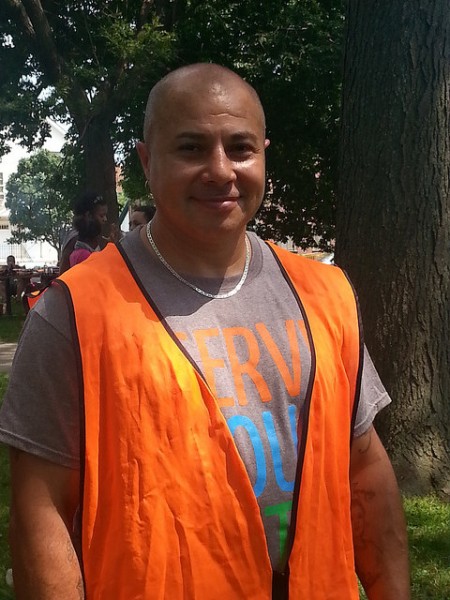 Anthony Mercado, who grew up in Clarke Square, participated in the Clarke Square cleanup. (Photo by Raina J. Johnson)

“If people see me cleaning up and respecting what I have, then maybe they will do the same thing,” Mercado said.

Also volunteering was Richard Schwoegler, director of Faith Builders’ Urban Heart Community Teams and a retired police officer. “I recently resigned as a police officer to go into ministry full time, and events like this help us learn who our neighbors are and build relationships,” said Schwoegler, whose height and signature cowboy boots make him stand out in a crowd.

The third annual Serve Your City day was held to clean up the streets and alleyways from 26th Street toNinth, between Mineral and Scott streets. More than 1,000 people were served lunch at the event, and vendors from organizations such as Milwaukee Public Schools, Big Brothers, Big Sisters and the Zilber Family Foundation distributed information. Face painting, a bouncy house and music entertained the children.

“This is for the community, by the community,” said Ramon Candelaria, executive director of the Clarke Square Neighborhood Initiative. He pointed out that the project brought together people whose interests ranged from beautification to crime prevention.

Residents participating in the clean-up event said they have seen a change over the years in Clarke Square, now one of Milwaukee’s most diverse neighborhoods—illustrated by the fliers advertising the cleanup, which were printed in multiple languages.

Craig Wright, a resident of Clarke Square for 13 years, was just returning home from a stay in the hospital so he wasn’t able to help. However, he said he enjoyed seeing the clean-up effort. “This neighborhood isn’t ‘Leave it to Beaver,’ but it is very community oriented.”

He credited Journey House and Candelaria with “fairness and a passion … to bring the community where it needs to be.”