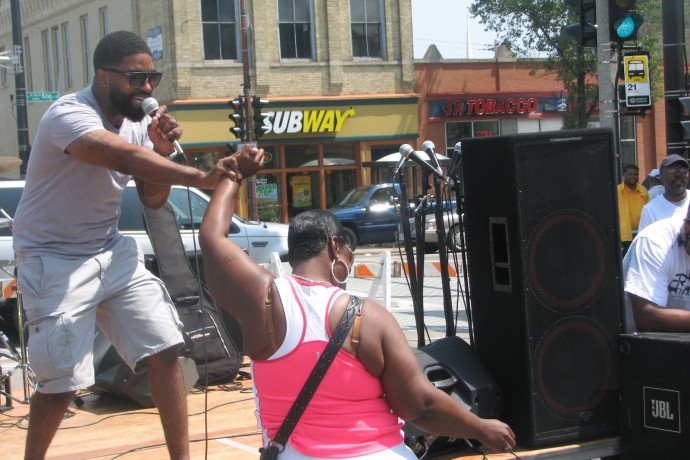 Bronzeville Week is in full swing after the North Side neighborhood celebrated its culture and arts during a street festival along North Avenue where more than a dozen musical and performing arts acts were featured.

During the Bronzeville Cultural & Arts Festival, music on three stages filled the air with rhythmic beats as people of all ages enjoyed fare from local vendors and shopped for knickknacks and clothes at booths set up by local business owners.

“I’m here to inspire the community. This is for the people,” said Karl Reeves, a 30-year-old local artist who displayed his colorful paintings along the street. 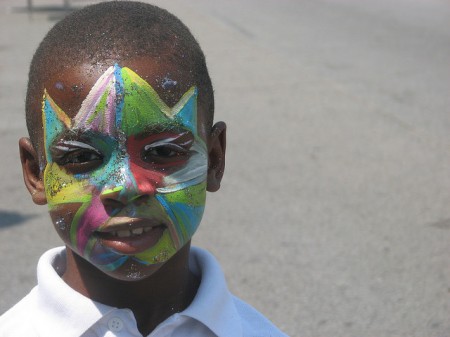 A young man displays his face paint at the Bronzeville festival. (Photo by Brendan O’Brien)

The festival was the first event of Bronzeville Week, which consists of guided tours, a business seminar, health screenings and an ensemble performance on Friday. The week is intended to highlight the positive economic and cultural aspects of the historic North Side neighborhood.

Bronzeville “years ago, used to be the center of black commerce, arts and culture and we are attempting to revive that,” said Alderwoman Milele Coggs during the festival. In March, Coggs unveiled designs for six sites in the Bronzeville Cultural and Entertainment District along west North Avenue. She has said that the projects would need to have a cultural component to garner her support. Development in the district, which falls within the Harambee community, has been largely stalled for nearly a decade.

Before the festival kicked off, a peace march was held along North Avenue, emphasizing the need for a violence-free neighborhood if the initiative is going to be effective.

“We recognize the tie between commerce and poverty and violence as well as us having solutions for our own condition,” Coggs said.

The Bronzeville Cultural and Entertainment District is part of a City of Milwaukee commercial and residential redevelopment initiative intended to reinvigorate the historic neighborhood where legends such as Billie Holliday, Duke Ellington and Nat “King” Cole performed in the vibrant nightclub scene during its heyday.

The festival gave young and upcoming artists such as Brent Tyler a chance to show off their talents and get their name out into the community.

“It’s really important for me to be out here to showcase my music and my love for the community because I want to give back,” said Tyler, a rapper, whose stage name is OTS, after he performed at the festival.

In addition to listening and dancing to performing artists and musical acts, festival goers shopped for ornate jewelry, colorful garments and fragrant oils at more than a dozen booths while they enjoyed summer foods including corn on the cob, brats and burgers.

“We came out to show our support for local (artists) and businesses,” said poet Adia Green, who brought her 8-year-old son to the festival, where she too performed.