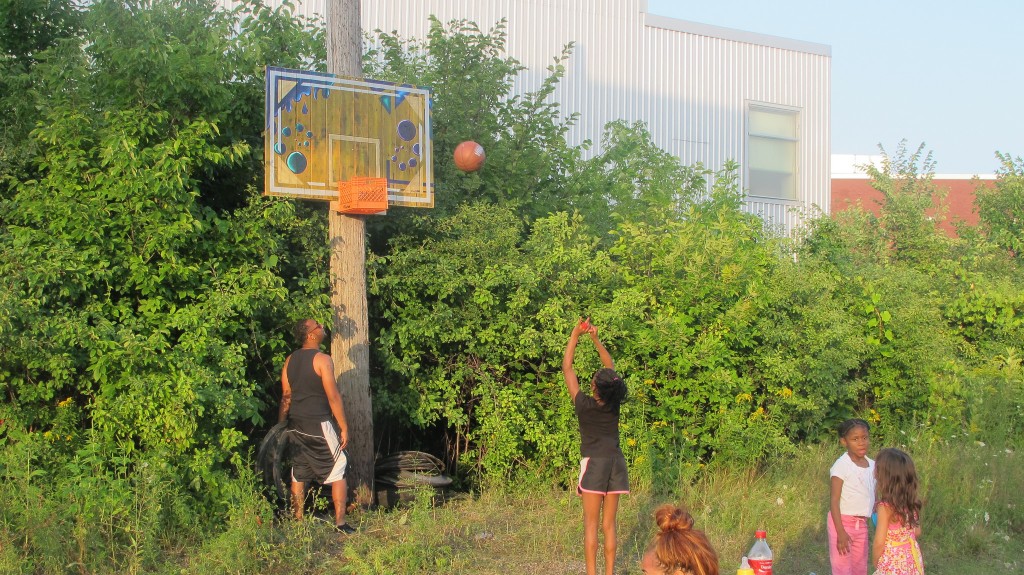 Vedale Hill’s daughter Jazale shoots baskets at his hoop crate as he waits to catch the ball. (Photo by Andrea Waxman)

Editor’s note: This article, originally published on Aug. 28, 2014, is one of a series profiling the finalists for Milwaukee Awards for Neighborhood Development Innovation (MANDIs). The Artery is a finalist for the Brewers Community Foundation Public Space Award, which recognizes a public space that helps build the community.

Sixteen-year-old Jordan Leong is about to move to Arizona with his family, but before he goes, he will install a sculpture he created somewhere here in his hometown. The piece is a wooden basketball backboard with a plastic crate “hoop” attached.

Leong spent a day constructing it out of scrap wood that he designed to look like a video game platform. He decorated it with themes from early Mario Brothers video games, with pen and paint. He hasn’t decided yet where he will mount it but he wants it to be used to play basketball.

The piece is one of the first to be created by neighborhood young people participating in Riverwest artist Vedale Hill’s “Hoop Dreams” art project in “the artery,” a reclaimed and repurposed stretch of the old Beerline train tracks.

Hoop Dreams refers to the passion that many young boys have for basketball, and their desire to emulate the sport’s stars who came from poor urban backgrounds like their own. It also is the name of a celebrated 1994 documentary that follows two African-American high school students who dreamed of becoming professional basketball players. 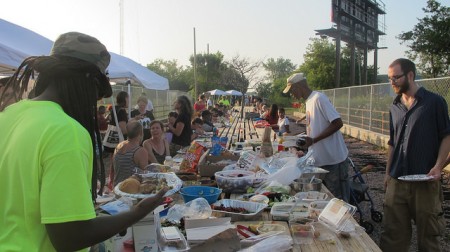 Harambee and Riverwest neighbors shared a community potluck dinner at a 100-foot table set up on a pedestrian bridge at the end of the artery. (Photo by Andrea Waxman)

Hill’s goal is to teach the youth skills that will help them transition to more realistic life goals when they reach young adulthood and basketball suddenly drops out of their aspirations.

“I find what they’re interested in and I try to teach them in a way that will help them long term,” Hill said. “If you don’t make it to the (professional basketball) leagues you can be a carpenter, because now you know how to use a hammer, a drill and all the tools it took to create these sculptures that are basketball hoops,” Hill added.

It’s also about making something positive out of a negative, such as the artery space, which was “a hub for graffiti, drugs and many shady things” before the artery project started here, Hill added.

The artery is located on a two-thirds mile stretch of land that traverses a narrow space just north of the intersection of E. Keefe and N. Richards streets. It is marked by a newly installed sign, a sculpture made of discarded tires, and a banner explaining that this is a space for visual and performance art.

The “art park” extends to the far side of a pedestrian bridge over Capitol Drive at 3rd Street. It includes five railroad shipping containers that have been remade into a digital computer lab dubbed ICAN2, and storage and performance stages.

The artery is one of two projects that make up an effort called Creational Trails. Funded by a $350,000 grant from ArtPlace America, Creational Trails seeks “to activate spaces as a means of encouraging acceptance and growth of the cultural diversity in Milwaukee,” according to its Web site.

Led by the Greater Milwaukee Committee’s Innovation in Milwaukee (MiKE) initiative, it is managed by a non-profit “placemaking” organization called beintween. beintween founder Keith Hayes, an architect, identified the Beerline trail for such a project several years ago, according to consultant Sara Daleiden. Placemaking is a multifaceted approach to shaping communities’ physical, social and economic wellbeing through art and culture. 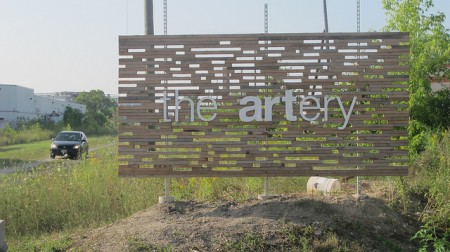 A sign marking the entrance to the artery, just north of the intersection of E. Keefe and N. Richards streets, was installed recently. (Photo by Andrea Waxman)

Another project planned for the artery is a mural on the side of the U.S. Corrugated Inc. industrial building at 3832 N. 3rd St. It borders the park and serves as the backdrop to a stage built for performances there.

Because getting permission to paint the mural has taken longer than expected, Hill developed “Hoop Dreams” to create art that would make an immediate impact on the neighborhoods of Riverwest and Harambee, he said. He recently installed his own basketball crate hoop near the pedestrian bridge.

The artery also has hosted a variety of performances. Selected by a jury of Milwaukee artists and community leaders, 20 of 116 ideas submitted have been performed at “festivals” once a month during the summer. Each festival occupied a new public space defined by “upcycled” materials such as the shipping containers. Performances take place on three stages as well as in ICAN2 LABS. Artists slated for the Aug. 30 festival include Erick Ledesma, Present Music, Kameelah + Yazmeen Muhammad, Milwaukee Public Theater, STITCH Milwaukee, Ina Onilu Drum and Dance Ensemble, and Playback Milwaukee Theater Company.

A wide variety of events including potluck dinners, open mic nights, and trivia games also are taking place in the artery. Canvassers are going door-to-door asking neighbors about their heritage and about favorite family recipes. There are plans to use this information in future art projects.

As for how the neighbors are responding to the project, Daleiden said, “In areas like this that had, and still have, many social justice issues like poverty and crime … it’s a slow process to build trust. But given that condition, I feel inspired regularly by our connection with people in these neighborhoods.”