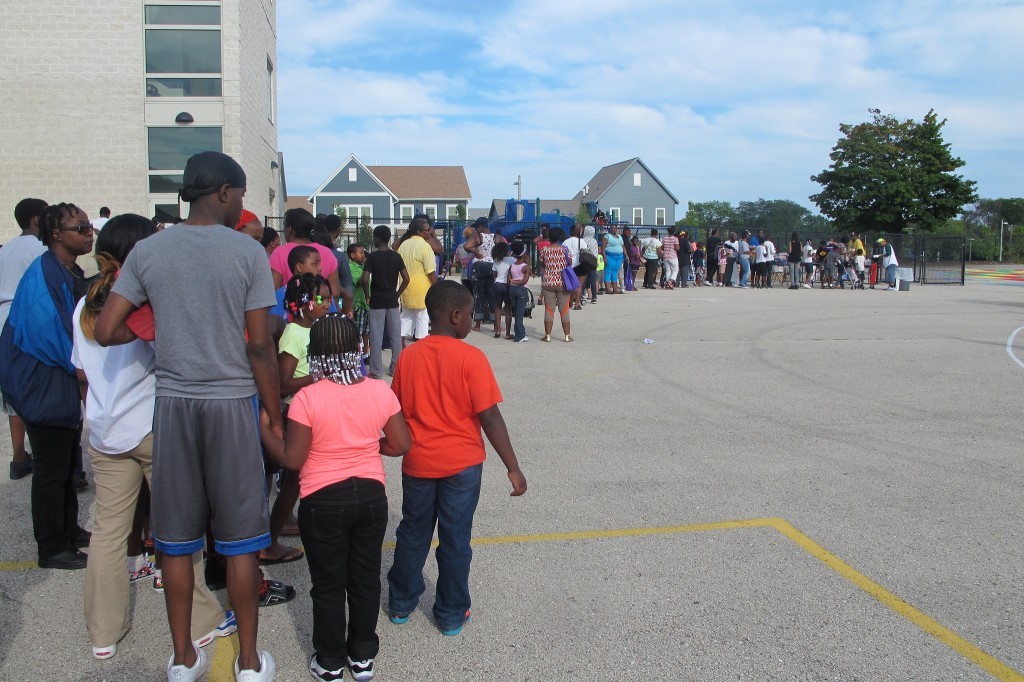 Hundreds of people lined up for a backpack giveaway at Silver Spring Neighborhood Center. (Photo by Edgar Mendez)

An hour before the start of a backpack giveaway at the Silver Spring Neighborhood Center, 5460 N. 64th St., the line of visitors snakes from the edge of the playground and past the main entrance, a sign of the high level of need in the area.

The center, which opened in 1958, shadows both the modern Westlawn Gardens, and the weathered Westlawn Housing Project.

For the past 10 years, backpacks and supplies have been donated to low-income elementary, middle and high school students there. This year, Silver Spring gave away 500 backpacks and provided employment resources to attendees.

But once visitors got through the line to receive their backpacks and other services, most stuck around to eat, listen to music and chat with fellow residents. To longtime resident Carolyn Milhouse, that’s a positive sign.

“People in this neighborhood have productive things to come out and do together now,” Milhouse said. 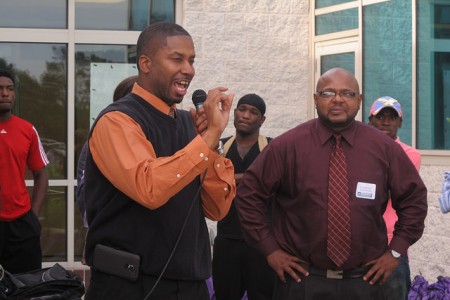 Milhouse said that there seems to be much more going on there now than when she moved into the area in the early ‘80s. As a result, the neighborhood, which she said was once among the most dangerous in the city, is much safer.

Residents say some of the change is linked to the major physical transformation of Westlawn in 2010, when the eastern half was razed to make room for the $82 million eco-friendly Westlawn Gardens, which opened in 2013.

The rejuvenation of the east side of Westlawn sparked momentum on the other side, said Jackie Burrell, president of the Westlawn Resident Council.

“It took a long time to change attitudes on this side, but we went at it,” said Burrell, president of the council for the past two years.

The epicenter of change was the Silver Spring Neighborhood Center itself, she said.

“We began to partner up more so that more residents could utilize the building and we could let each other know what we needed,” Burrell said.

The center attacks problems associated with poverty at multiple levels, said McHenry. Providing employment services is one way to help area residents build self-sufficiency, and giving away backpacks with supplies helps students get off to a good start, he added.

More activities at the center keep more kids busy and streets safer, according to Cordell Ray, who’s been patrolling Westlawn for 18 years as captain of public safety for the Housing Authority of the City of Milwaukee.

“We get a lot less calls at Westlawn than we used to,” Ray said. Residents are taking ownership of the neighborhood and helping to clean it up, he added.

“I’d tell residents, if you don’t call us we think nothing’s happening,” he said.

Now they call, he said, especially when outsiders are vandalizing the playground or breaking other rules that residents of the project abide by.

Of course, not everyone at Westlawn has changed, noted Jennifer Andlar, who has lived there on and off for 20 years. She said there’s no shortage of people causing trouble, but she does see positive signs.

“People from the center reach out to us now, trying to get people involved and offering us help so we can improve our lives,” Andlar said.