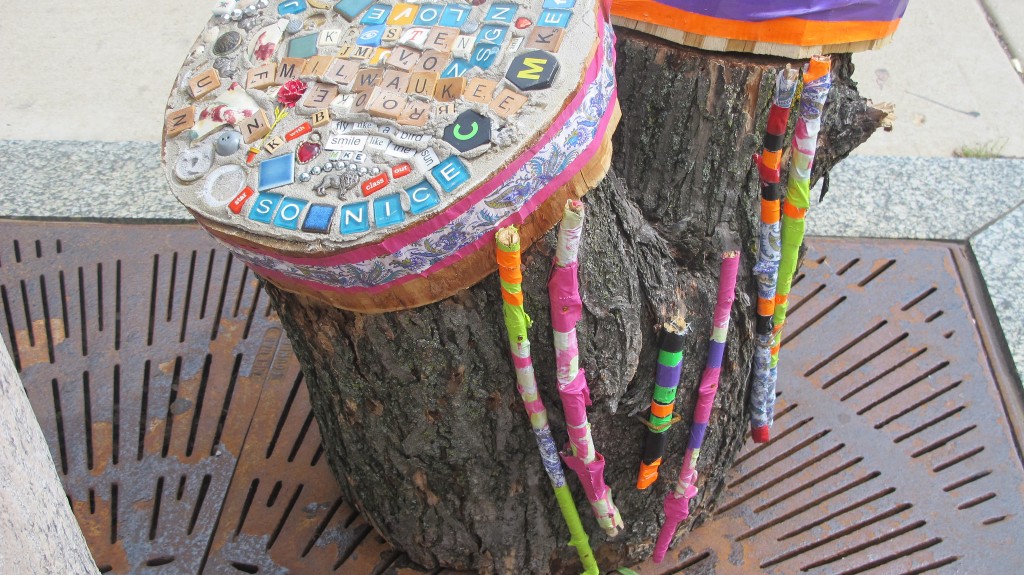 Artistic tree stumps mosaics, referred to as “LUV Downtown StreetSeats,” have recently sprouted up alongside Wisconsin Avenue bus stops between 4th and 8th streets. The stumps are topped with circular concrete slabs studded with an eclectic array of objects ranging from seashells and Scrabble pieces to strings of beads and shiny buttons.

Evelyn Patricia Terry, who was named “2014 Artist of the Year” by the Milwaukee Arts Board, crafted the project.

Leon Barnes Jr. was sitting on one of the “LUV” seats while waiting for the bus near the corner of Wisconsin Avenue and James Lovell Street on a recent weekday. “They’re beautiful,” said Barnes, who said he admires Terry’s imagination and resourcefulness. 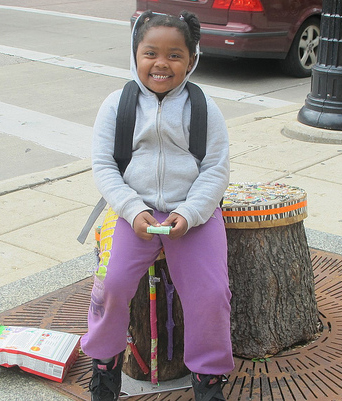 Jasmine Johnson made use of a colorful “LUV” seat while waiting for the bus with her mother, Deborah. (Photo by Molly Rippinger)

Another Milwaukeean, Jerome Gold, called the project “very creative,” while Katherine Chavez was unsure about how to interact with the stumps while waiting for the bus outside of the Wisconsin Center. “Are you supposed to sit on them?” asked Chavez, who said the “LUV” seats are an interesting addition to her daily bus route.

Terry came up with the idea for the “LUV” seats last year when Creational Trails— a series of art projects that promote a positive, vibrant culture throughout Milwaukee —asked area artists to pitch projects to be showcased along Wisconsin Avenue.

“It was an organic process,” said Terry, who wanted her project to involve seating for an urban setting. She settled on tree trunks, which Terry collected by asking the City of Milwaukee’s Forestry Services, the Vanguard Sculpture Services and fellow artists if they had any downed logs or stumps to donate to the project. Terry then affixed the stumps with branches wrapped in bright strips of duct tape.

The idea for the mosaic toppers came as Terry sought a way to incorporate pieces from her vast collection of found materials, which includes jewelry, trinkets and small toys.

Milwaukeeans created the mosaics with the help of Terry and area muralist Sally Duback at NEWaukee Night Markets, a monthly initiative of Creational Trails that has transformed the parking lot between 4th and 5th streets on Wisconsin Avenue into a space dedicated to the local art scene.

Fondé Bridges, Terry’s son and a “healthy words” advocate in Milwaukee, also was there to encourage participants to incorporate words such as “inspire,” “benefit” and “gratitude” into their designs.

“It was exciting to have public engagement,” said Terry, who was elated by the random pattern compositions and vibrant colors that the participants created.

The “LUV” seats are part of a series of interactive street exhibits produced for the Night Markets. Others include Daniel Fleming’s project “FaceBox”—a physical form of Facebook that allows people to hand write their “statuses” upon large black boxes located between 4th and 5th streets on Wisconsin Avenue.

The Night Markets have provided Milwaukeeans an opportunity to interact with artists, vendors, live performers and area restaurants in a safe and vibrant setting. The last Night Markets of the season will be held on Wednesday, Sept. 17, and Wednesday, Oct. 15, from 5-10 p.m.