You are here: Home / Home / Carousel / Greater Together Challenge finalists tackle segregation with range of ideas
Share this... 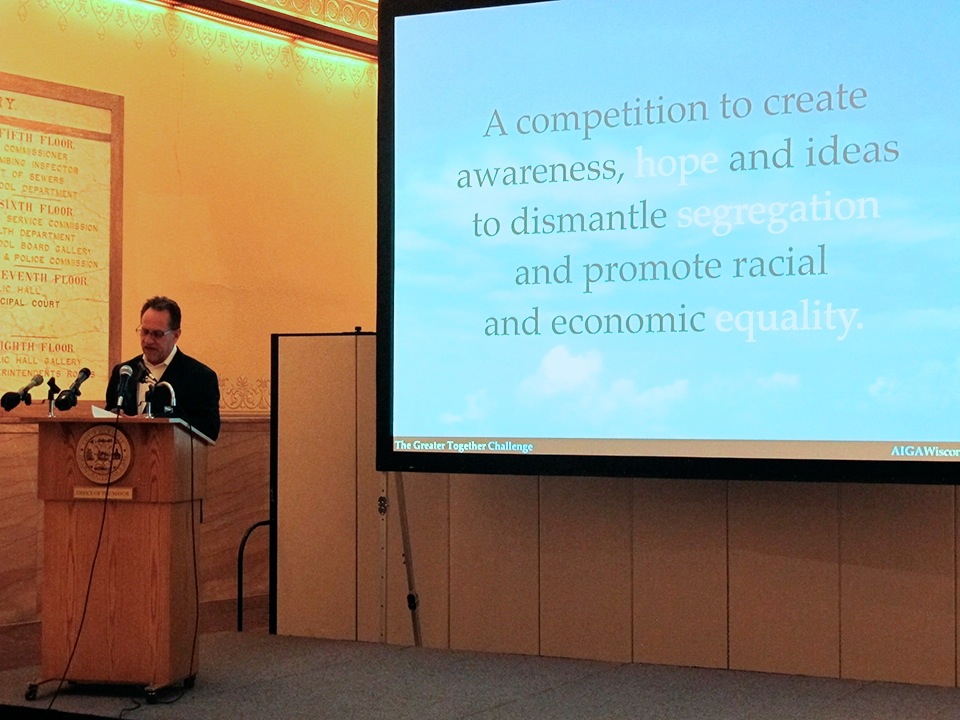 Ken Hanson, CEO of Hanson Dodge Creative, explains the Greater Together Challenge at an event in mid-June. (Photo by Patrick Leary)

Authors, teachers, artists and a state senator were among those who entered the Greater Together Challenge, an initiative intended to address a stubbornly high segregation rate, abject poverty and a host of other crippling social conditions facing African Americans in Milwaukee.

More than 130 ideas to dismantle segregation were submitted, of which 15 were selected as finalists. Some entries came from individuals, although most represented organizations, including 88.9 Radio Milwaukee and local non-profits.

“We are humbled by the quality of the ideas that have come out of this challenge, large and small, and are anxious to see them shared in a very public way,” said Chris Klein, president of AIGA Wisconsin, who designed the competition.

The finalists include a plan to produce and place an iconic poster symbolizing Milwaukee’s struggle with segregation, to a long-range effort to provide educators with training that will help them teach in an anti-racist, multi-cultural way. 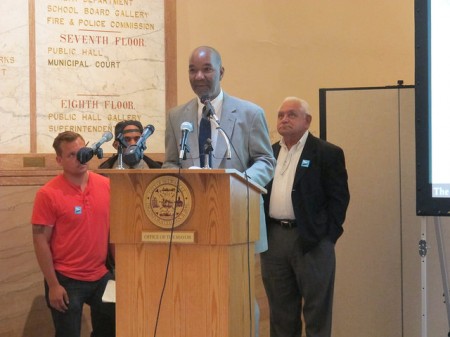 James Hall, president of the Milwaukee chapter of the NAACP, speaks at a gathering to launch the Greater Together initiative. (Photo by Patrick Leary)

The winner will receive a $5,000 cash prize to support the idea. Greater Together will also help with implementation of the winning proposal.

Nichole Yunk-Todd’s idea is to create a program that would offer all public school students the ability to take driver’s education classes for free. A “Universal Driver’s Education” program, said Yunk-Todd, would open up the city to teens who don’t usually venture out of their segregated neighborhoods.

“You don’t have to travel to another country to see other cultures; we have very different realities right down the highway,” said Yunk-Todd, who works in the division of policy and workforce development for Wisconsin Community Services.

Yunk-Todd’s idea would involve a collaborative effort among her organization, the Center for Driver’s License Recovery & Employability, Legal Action of Wisconsin, the City of Milwaukee and MATC.

Licenses would make it easier for teens to interact socially with youth in other neighborhoods, thus helping to create a less segregated atmosphere, she said.

“It’s kind of a cultural critique from a youth perspective,” said Henry, who added that the process helps youth become problem solvers.

Henry, who left Milwaukee for college 20 years ago and returned recently, found that not much had changed. “The neighborhoods are still divided up the same way as it was when I left,” she said.

That inspired her to enter the challenge, and involving youth was a way for her to get back to her roots, she said. She spent several years as a program director with AmeriCorps.

Henry said the Greater Together initiative has much promise. “It has a chance to really change things.”

James Hall, president of the Milwaukee chapter of the NAACP, agreed. “In my years as an advocate, nothing has made me as hopeful that Milwaukee may be ready to confront issues of segregation as this initiative and the coalition that’s been formed,” Hall said.

Confronting lingering issues such as segregation, and increasing diversity are the keys to the city’s long-term prosperity, said Ken Hanson, CEO of Hanson Dodge Creative, who launched the Greater Together Challenge.