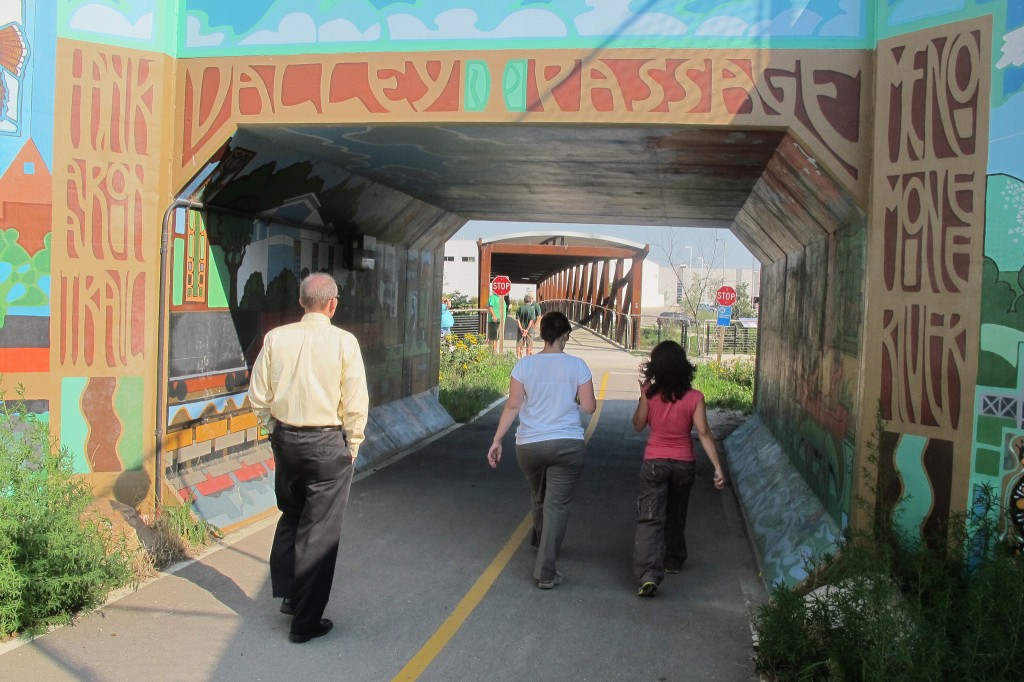 Pedestrian and bicyclists now have access to the Menomonee Valley through four new points including the Valley Passage. (Photo by Edgar Mendez)

The transformation of the Menomonee Valley into an industrial, recreational and entertainment district has been a notable success, but one key objective remains unmet: the creation of job opportunities for nearby residents, according to a new Public Policy Forum (PPF) report.

The July closing of the Cargill beef slaughterhouse leaves Palermo’s Pizza and the Potawatomi Hotel and Casino as the only Valley businesses that employ significant numbers of residents in surrounding neighborhoods, the report states.

“The intent of the plan for the Valley was to hire people from the neighborhood; but we’ve had trouble connecting the local workforce with jobs,” said Dave Misky, associate executive director of the Redevelopment Authority of the City of Milwaukee, during a recent panel discussion.

According to Laura Bray, who served as the executive director of Menomonee Valley Partners (MVP) from 2004 until resigning last week, the area surrounding the Valley has the highest density of residents in the state. But, they’re not necessarily trained for the higher-end jobs that new businesses are bringing to the Valley.

Among the higher-end industries relocating or opening in the Valley’s new Global Water Center are the research operations of A.O. Smith Corp. and Badger Meter Inc.

“We need to work with existing workforce development projects to train workers for these positions,” said Bray, who added that another strategy would be to attract more businesses that offer entry-level positions.

Still, job growth in the Valley has outpaced the city’s rate from 2002-2011. About 3,200 jobs were added, according to the report. Forty-nine businesses have moved to or expanded in the Valley since 1998, when the original Valley Plan was released.

Back then, even the most optimistic of visionaries would have had a hard time predicting what the Valley would become.

Businesses have replaced brownfield; from pollution sprouted a park; and an area that was once an eyesore now houses the Menomonee Valley branch of the Urban Ecology Center. A combination of factors made this possible, explained the PPF report.

One was an extensive planning and visioning process, which built consensus around key objectives. That was difficult, according to Bray, because the Valley is not residential, making it easy for people to turn their back on the project, she said. “We had to make no one’s neighborhood everyone’s neighborhood,” Bray said.

Part of that strategy involved creating easier access to the Valley, which was largely cut off from surrounding neighborhoods.

New bridges as well as pedestrian and bicycle connections to the Valley allow visitors to visit the Urban Ecology Center, Three Bridges Park, the Hank Aaron State Trail and Miller Park. Residents of the South Side neighborhoods Silver City, Clarke Square and Walker’s Point all have easy access to the Valley now.

Another important factor in the transformation of the Menomonee Valley was the creation of MVP, which worked with the city, non-profits and other stakeholders to secure private, local and federal funding. Grants to clean up brownfields, development grants and other resources funded the cleanup and the eventual repurposing of the land, the report stated.

But some of that money has dried up, especially state brownfield grants and federal earmarks, creating significant barriers to other redevelopment projects, according to the report. Still, the model used in the Valley could work in the redevelopment of other industrial areas, including the 30th Street Industrial Corridor and the Inner Harbor, found the report.

“The Valley has unique assets,” said Miske, referring to its access to water and rail yards. “But the 30th Street Corridor has those same assets,” he added.