You are here: Home / Home / Carousel / Visitors to weekly bed giveaway dream of comfortable place to sleep
Share this... 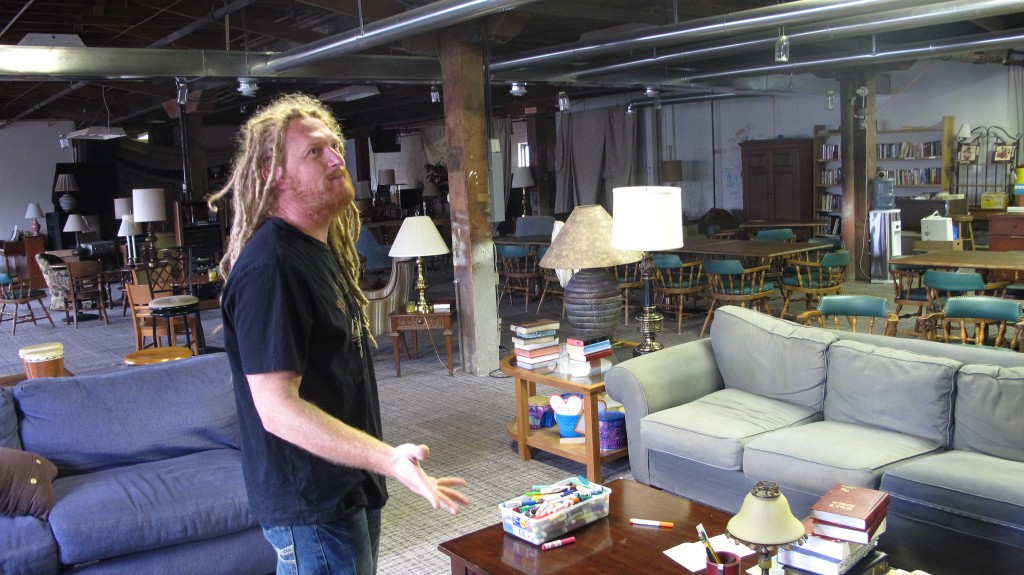 Steve Grabosch, founder of Adullam Outreach, shows visitors around a warehouse on a recent Thursday morning. (Photo by Brendan O’Brien)

A bag of donuts, a couple of folding chairs and a Bible is all Steve Grabosch had.

Five years ago, Grabosch, a 44-year-old father of eight, walked away from a well-paying job in the financial sector and cashed out his 401k plan to pursue a faith-driven dream to start a community center with his wife, Priscilla, in the heart of Milwaukee’s inner city.

“I felt like God was telling me to do this full time and calling me to this community…that was pretty scary,” said Grabosch, a self-described penny-pincher. “It definitely changed my paradigm forever to walk away from a good paying job without anything. Nothing.” 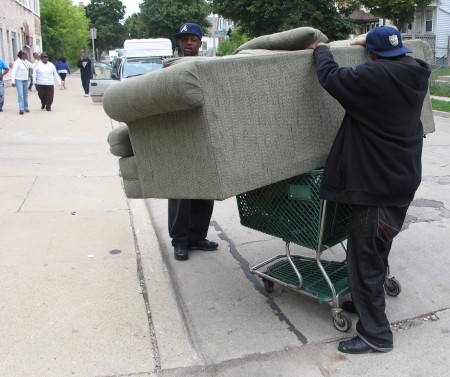 A man attempts to use a plastic grocery cart to take a home a couch that he just picked up at Adullam Outreach’s warehouse. (Photo by Brendan O’Brien)

Grabosch signed a $1 a month land contract for a dilapidated, empty warehouse at 3033 N. 30th St. in Sherman Park, but the lack of an occupancy permit early on kept him out of the building. So he sat outside the warehouse each morning handing out donuts, reading his Bible, hoping to entice passersby in conversation about the Scripture and the needs in their community.

“I wasn’t working and I felt I had to do something with my time,” he said. “Within 15 minutes I would be joined by someone enjoying a donut and the Bible.”

Five years later, the warehouse is home to Adullam Outreach, a burgeoning community center that has blossomed into a haven for families living in poverty, offering donated clothing, toiletry items, household goods, building materials and furniture, including free beds, to anyone in need each Thursday.

“We are here to build unity and to try to tear down the walls that separate,” Grabosch said as he walked around the 30,000-square-foot space, unlocking doors for the community center’s weekly giveaway before heading outside the center to pray with volunteers and those seeking furniture.

“I want to challenge the group of people standing right here … to love someone you don’t want to love, whether it’s because of what they have or don’t have, whether it’s the color of their skin, their religion (or) their politics. Try to show that person love,” prayed Grabosch, a bearded man with blond flowing dreadlocks, surrounded by bowed heads and closed eyes.

Moments later, the freight doors swung open and about two dozen people scurried into the warehouse where volunteers helped them pick through used, stained and tattered mattresses and box springs lining the walls of a storage room. 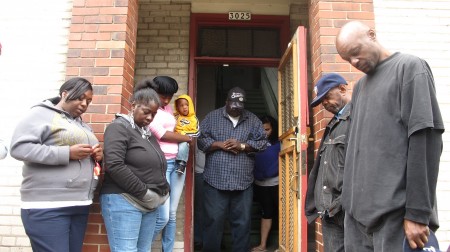 People bow their heads during a prayer before Adullam Outreach opens its doors. (Photo by Brendan O’Brien)

“We’re trying to help people live an everyday life,” said Misty Harris, a volunteer at the center. “We’re comfortable. We take a simple mattress for granted, when we have people sleeping on the floor.”

On the street, people cheerfully helped strangers push and pull dense mattresses, inflexible box springs and various furnishings out of the warehouse. Rope and bungee cords helped secure beds on the tops of cars. A man placed a couch on top of a plastic grocery cart to wheel it home.

“It’s real valuable…it’s a blessing,” said Ebony Mayfield, 37, who rode up to the warehouse in a late-model sedan hoping to retrieve two beds for herself and her family.

About an hour after the doors opened, the last of a constant procession of vehicles rolled away from the building with passengers’ hands reaching out the windows, grasping the sides of the unsteady mattresses and box springs above.

Moments later and a mile east, at the corner of Teutonia Avenue and Chambers Street, Felicia Davis, 19, and a few of her cousins and friends untied a queen size box spring from the top of their SUV. They dragged it into her small house, through an empty dining room displaying family photos and a framed poster of Bob Marley nailed to the wall

They pushed and pulled the wood frame into the kitchen, stopping abruptly at the mouth of a steep attic staircase. Nearby a couple of eggs remained in the corner of a cold frying pan on the stove as Davis and her cousin Richard struggled to fit the wide unbendable box spring up the narrow, twisting staircase.

“I can’t believe this. After all of this, it’s not going to fit,” said a sweaty and frustrated Richard.

As if praying for the group of bed movers, a small porcelain statue of the Virgin Mary with her hands gently clasped together sat bowing her head on a wicker basket between a red Solo cup full of toothbrushes and black wig in the adjacent bathroom.

“We don’t have the money and we can’t afford (beds). Everyone sleeps on the floor,” said Davis, who lives in the house with her mother and two brothers, 9 and 6 years old. The family was homeless until recently.

A mattress that was just retrieved from the community center leaned against the wall outside of a nearby bedroom, a few feet from a flowered blanket and a white sheet lying crumbled on the floor on top of a pillow, marking the spot where Davis had been sleeping.

“It’s painful,” she said. “You wake up with backaches every morning and you don’t know if something is crawling on you.”