You are here: Home / Home / Carousel / Clean Slate Milwaukee urges ex-convicts to ‘be part of their own rescue’
Share this... 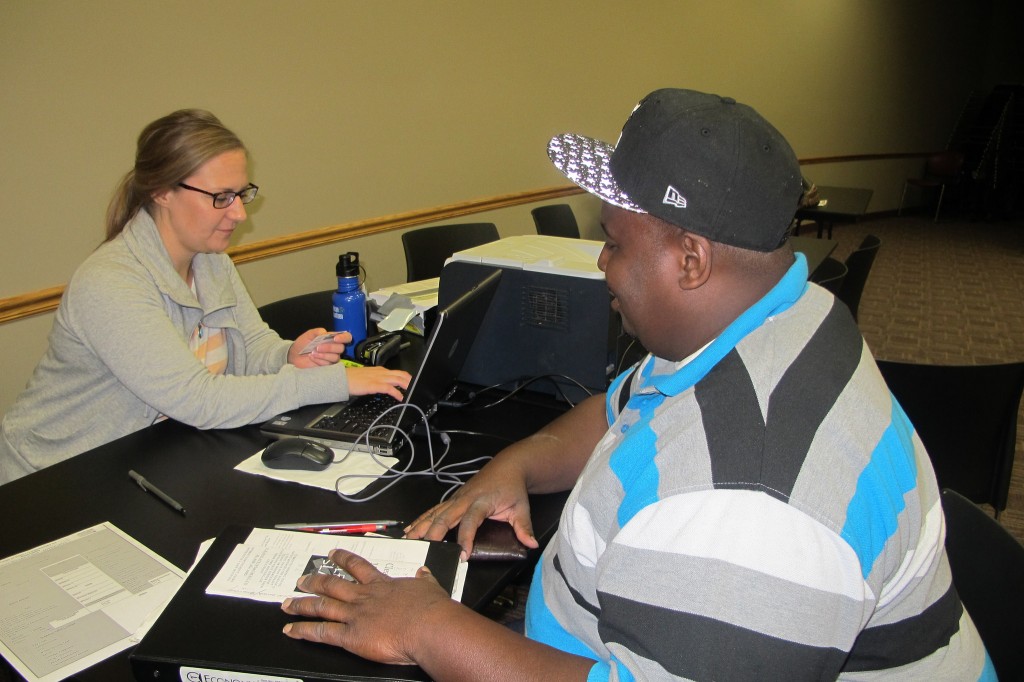 Jermaine Johnson works with Angela Catania, a supervisor at the Center for Driver’s License Recovery and Employability, to check his driving status. (Photo by Raina J. Johnson)

Convicted on drug charges in 2005, Jermaine Johnson, 32, is trying to get a second chance.

Johnson, the father of five children, is an unemployed machine operator and general laborer. He said he wants to show his kids a better life but can’t seem to catch a break.

“I want to do more for all my kids, but I have a criminal background. It’s hard to move ahead,” he said.

Johnson isn’t alone in his struggle to get past a criminal conviction. About 12 percent of African American men in Milwaukee County have served time in Wisconsin’s correctional facilities, according to a University of Wisconsin – Milwaukee study of black male incarceration. 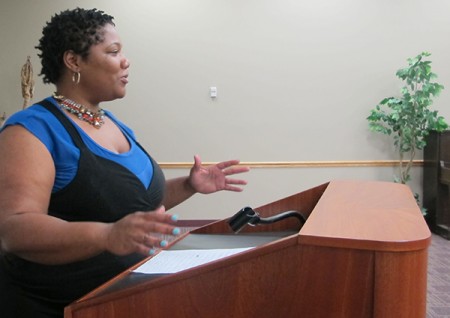 “You have to be a part of your own rescue,” said Shanyeill McCloud, president of Clean Slate Milwaukee, at a recent event intended to educate black men about driver’s license recovery and expungement of criminal records. Other sponsors included The Wake Up program, Center for Driver’s License Recovery and The Milwaukee Fatherhood Initiative.

McCloud, a certified paralegal, helps people clean up their court records, in some cases getting them expunged. Expunging a court record means the court seals the entire criminal case file and only allows access to the file with a court order. Records are never fully erased and are still available to law enforcement without a court order. Clean Slate provides expungement services for young adults between the ages of 17-25 who have non-violent felony or misdemeanor convictions.

“Men and families in our communities need resources, but there’s a dose of personal responsibility thrown in too,” agreed Dell Williams, program director of the Milwaukee Fatherhood Initiative.

McCloud said she enjoys “when people do get that second chance. They light up like a Christmas tree and regain their confidence. I can’t explain the feeling of witnessing a transformation.”

Kenneth Greer, 30, came to his own rescue with the help of Clean Slate.

“My record looked ugly,” recalled Greer, a community advocate and general laborer. “Clean Slate helped me a lot. I was able to get dismissed charges removed so on background checks, I looked better to employers,” he said.

When he was 18, Greer was charged with a misdemeanor and has since stayed out of trouble. But he still had to deal with the backlash from his past.

“Not getting the jobs I wanted made me feel like a second-class citizen. I did well in the classes I took, but then when it came time to interview for jobs, I was told that I was high risk because of my record. It made me feel devalued, like I wasn’t a citizen,” he said.

Greer is the father of three children, and now works in Menomonee Falls as a material handler for Quest Industrial Products. He said that in the past he has had trouble supporting his children. “While I was looking for work, I couldn’t find a job fast enough, because non-payment of child support is a felony in itself and you can go to jail.”