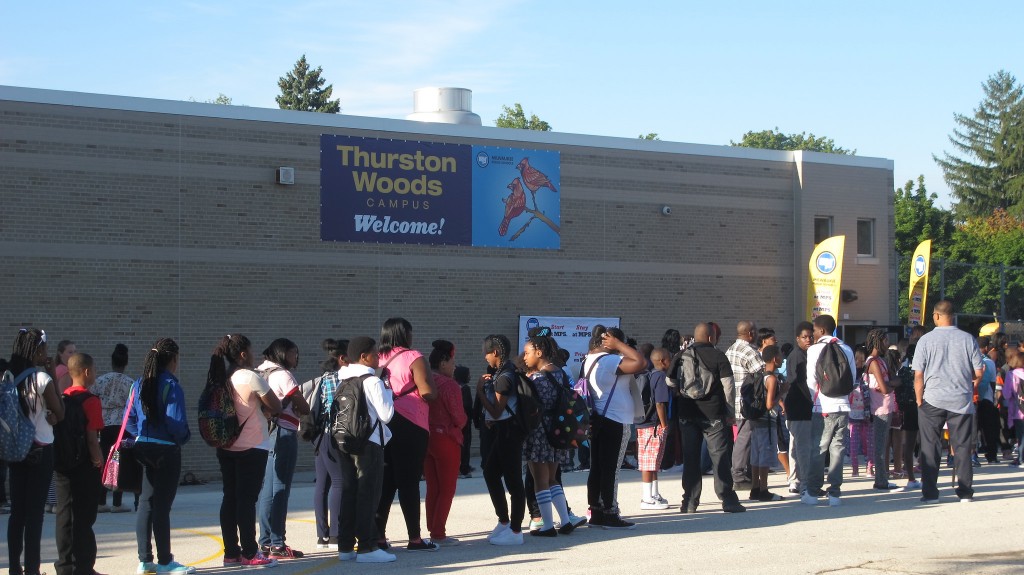 The first day of classes at Thurston Woods marked the beginning of a three-year, initiative to increase academic performance. (Photo by Molly Rippinger)

At Thurston Woods Campus, Principal Keona Jones has used a portion of the funds the school was awarded through the Commitment Schools program to hire Katrina Edmond, a teacher who works with K-8 students to improve mathematics and literacy.

“I look at their strengths,” explained Edmond, the “building intervention” teacher at Thurston Woods, 5966 N. 35th St. Edmond also is the chair of the Positive Behavioral Interventions and Supports (PBIS) system, a decision-making framework that aims to improve academic and behavior outcomes for students.

Typically, Edmond has 10 students per session, few enough for the individual needs of each student to be addressed. The lessons vary with the grade level, but include basic math and literary skills and also more advanced concepts.

Edmond stressed that repetition and reiteration of key concepts is crucial for student improvement. “Each time the students come down they know exactly what to do,” she said, explaining that children enjoy the opportunity to learn in a smaller classroom environment. 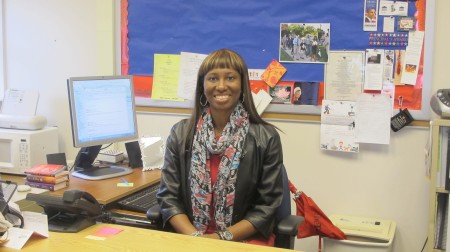 According to the Thurston Woods Commitment School proposal, each student is scheduled to spend 60 minutes in the individualized academic setting per week.

Pilar Carrington-Ahmad, a first-grade teacher at Thurston Woods and a 14-year veteran of MPS, said that the intervention sessions have helped her remain focused in the classroom. “Sometimes I don’t have the time to work one-on-one [with students], so this is a great way to push the kids forward.”

Thurston Woods also has hired a “school support” teacher who aids teachers throughout the building.

Dr. Doris Walker-Dalhouse, a professor of literacy in the Department of Educational Policy & Leadership at Marquette University, said having qualified teachers is a step in the right direction when it comes to improving math and literacy. “More support in the school setting is always welcomed,” said Walker-Dalhouse.

Thurston Woods was one of the 14 underperforming MPS schools selected for the Commitment Schools program after its plans to implement academic and behavioral interventions were approved by a selection team consisting of educators, administrators, members of the Milwaukee Teachers’ Education Association and community partners.

Each Commitment School will receive $300,000 in federal grants over a three-year period. The federal grants will total $5 million, with a portion of the funds allocated for administrative support and oversight. Other Commitment Schools are using the funds to implement improvement systems, upgrade technology, increase professional development for teachers and hire additional staff.

Dr. Darienne Driver, recently appointed superintendent of Milwaukee Public Schools (MPS), has been instrumental in implementing the Commitment Schools program. “Our Commitment Schools effort is critical,” stressed Driver during the MPS school year “ring in” at Thurston Woods. “We must accelerate efforts to improve achievement.” 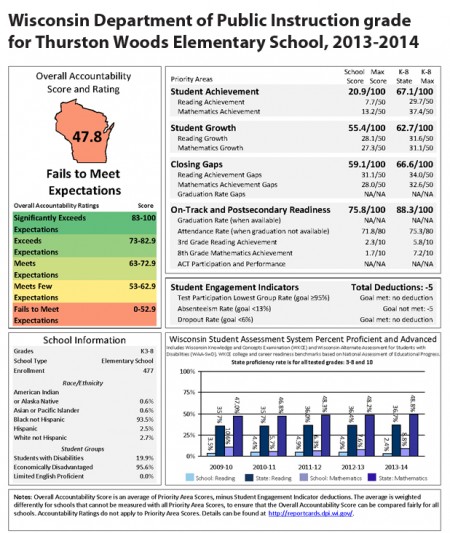 (Click to enlarge) Thurston Woods was one of 48 MPS schools that failed to meet expectations, according to the Wisconsin Department of Public Instruction (DPI) 2013-2014 State Report Card. (Graphic by the Wisconsin DPI)

All 48 MPS schools that “failed to meet expectations” set by the Wisconsin Department of Public Instruction (DPI) in 2013-2014 were invited to submit a formal proposal.

Ruth Maegli, chief innovation officer at MPS, explained that the Commitment Schools approach was determined to be the best way to target schools with the greatest amount of need.

“We know schools need more resources,” said Maegli who has worked as an MPS teacher, principal and administrator for more than 25 years.

Another element of the Commitment Schools effort is to lower the principal turnover rate in MPS. At the beginning of the 2013-2014 school year, 28 schools in the district had new principals.

“Leadership is the first step,” said Jones, who has been with MPS in various roles for 14 years and expects to stay at Thurston Woods through the Commitment School initiative.

Success is being measured through Measures of Academic Success (MAP) testing. Thurston Woods Campus students take the test three times during the school year, beginning at the end of September. Results for the computer-administered test are instantaneous, which allows teachers to better assess the strengths and weaknesses of students.

The MAP testing data are also used to implement Response to Intervention (RtI), a framework used throughout MPS that allows a continuous review of student progress through a tiered system of evaluation and action.

MPS was the only district out of the 92 in southeast Wisconsin that received a “failed to meet expectations” grade in the DPI 2013-2014 report card, according to a new report released by the Public Policy Forum that examines the finances and performance of public school districts in southeast Wisconsin.

The Public Policy Forum also found little improvement in the racial achievement gaps within southeast Wisconsin districts. When compared to state averages for Wisconsin Knowledge and Concepts Examination (WKCE) math and reading scores, regional African-American students have lagged in proficiency while white students surpassed the state averages over the past five years.

About 95 percent of Thurston Woods students are African-American, according to the DPI 2013-2014 district report card. District-wide, 55.7 percent of students are black.

In a press release after the DPI state report cards were released, Driver reiterated the need for intervention in MPS.