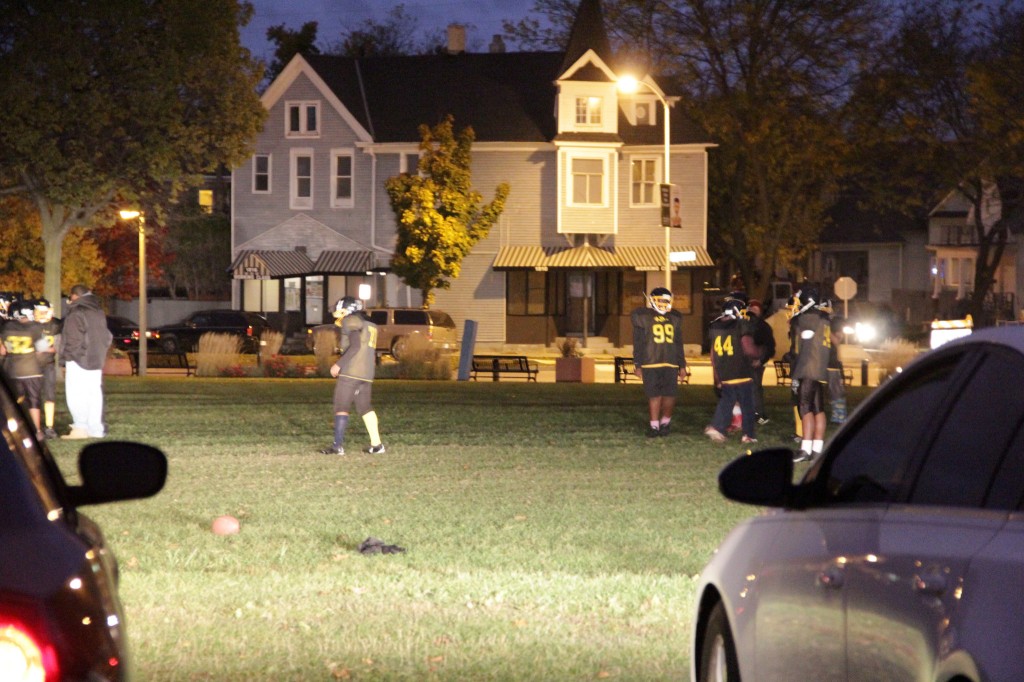 The Running Rebels football team practices at Johnsons Park in the dark. (Photo by Molly Rippinger)

When the sun goes down in Johnsons Park, the cars come out, shining their headlights onto an open field where football practice is underway.

Shorter days and dwindling daylight have forced Running Rebels football coach Maurice Brown to get creative so the team can practice in the dark.

Myesha Hodges, whose son, Brian Johnson, also plays on the team, said the athletic and after school programs offered by the 34-year-old community organization have been critical for her children. 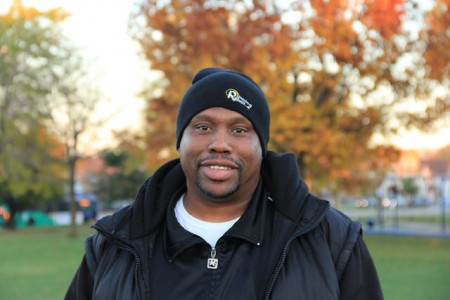 “My kids have been going to Running Rebels every day after school since 2005,” explained Hodges, who resides along the southern border of Johnsons Park on West Brown Street. “Running Rebels has been a huge part of keeping our boys out of trouble.”

Brown noted, “These kids are the future. If we invest in them now, they will have success in the future.”

More than 80 players ranging from 5- to 14-years old make up the 2014 Running Rebels football roster, which is divided into three teams based on league age requirements.

Football practice is held on an unmarked field in the 13-acre Johnsons Park, located in the Lindsay Heights neighborhood.

The Center for Resilient Cities, a nonprofit dedicated to sustainable community development, has spent the past decade working with public and private partners to revitalize three adjacent properties in Lindsay Heights through the Johnsons Park Initiative. The third phase of the community-wide initiative focuses on renovations to the park.

Karen Hunt, development manager for the Center for Resilient Cities, explained that the plans include installation of a path lined with LED lighting, which will be the first of its kind in the Milwaukee County Parks system. According to Hunt, the energy-efficient lighting will allow for greater visibility throughout the park during nighttime use.

One of the first enhancements at Johnsons Park was removing berms that lined the perimeter in 2009.

“We were really pleased when they got rid of the berms,” said Dawn Barnett, co-executive director of Running Rebels. “If you can’t see from one end of the park to another, the area becomes easily susceptible to crime.”

Other proposed park enhancements not yet implemented include improved sports field surfaces, an open-air performance stage, a new pavilion and new restroom facilities.

“We have had problems in the past with accessibility to bathrooms,” explained Barnett. “Also, having a place where we could host outdoor events would be huge.”

“This report was brought to our attention around 2004,” noted Rainwater. “By 2005 and 2006, we were invited by the NAACP as well as Preserve Our Parks to develop a concept plan with the community, and we began partnering with the county on a development agreement.”

The first phase of the Johnsons Park Initiative was Alice’s Garden, a two-acre urban garden completed in 2010. The second phase of the initiative began in 2010 and transformed the five-acre Brown Street Academy schoolyard into a multi-purpose green space.

Rainwater and Hunt explained that funding for the Johnsons Park phase is currently being finalized and renovations could begin as early as spring 2015.