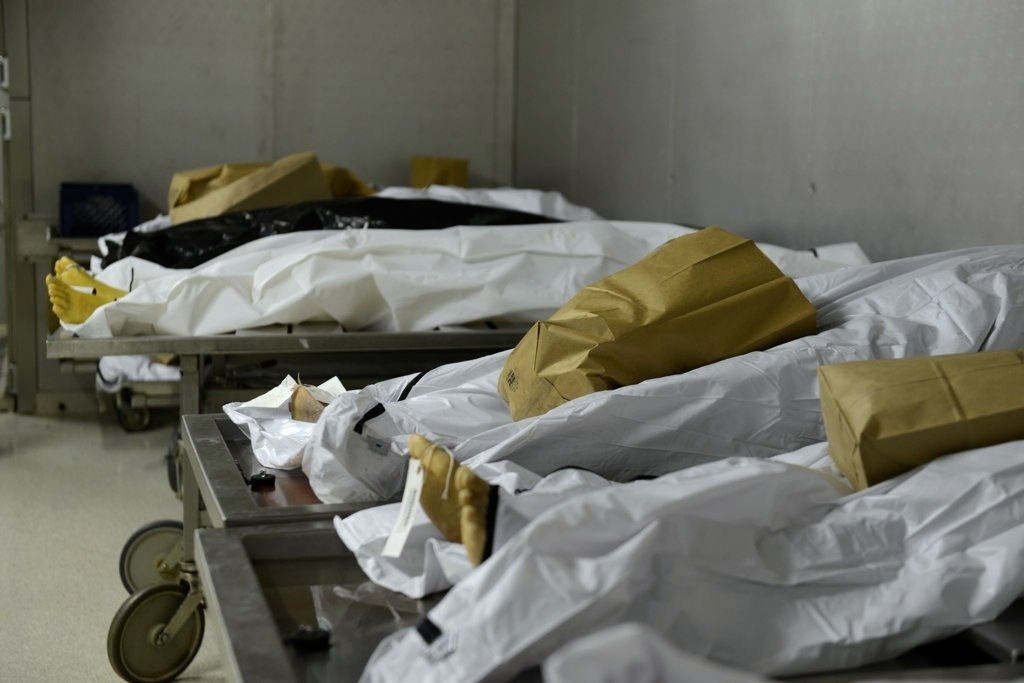 Everyone in the neighborhood knew him.

They offered the man food when they saw him and noticed when his health began to slip, when he lost even more weight and walked a bit slower. Despite smoking discarded cigarette butts he picked up off the ground and drinking booze out in the open, he was considered part of the fabric of the neighborhood in the 900 block of South 3rd Street.

They knew he lived behind a two-flat in a brown utility shed. He was allowed to make the shed into a home by the owner of the property, for whom he regularly did small manual labor jobs, such as shoveling snow and mowing the grass.

“He was just happy there. He didn’t want anything else,” said George Prentice, the property owner. “He was what he was and you weren’t going to change him.”

But when two frigid weeks passed without seeing the man, a concerned neighbor busted through the shed’s small door, which was padlocked from the inside. He entered the 4-by-5 foot shelter, furnished with a bookcase and a chair. It was also equipped with a microwave, television and space heater powered by an extension cord that ran from the two-flat. 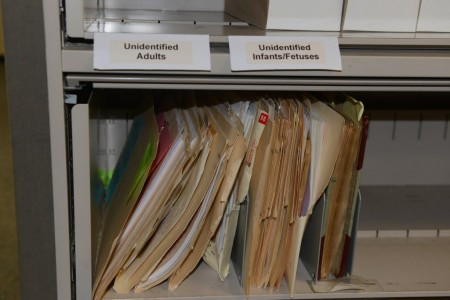 A file cabinet contains case files of the unclaimed and unidentified bodies.. (Photo by Sue Vliet)

In the center of the shed, warmed by the space heater that remained on and plastic garbage bags covering the door jambs, the neighbor found the man laying on a pile of blankets, dressed in five shirts and jackets, two pairs of pants, a pair of socks and boots.

Jenni Penn, an investigator at the Milwaukee County Medical Examiner’s Office, arrived at the shed moments later and began the process of positively identifying the man and informing his family of his death.

Penn is part of a team at the examiner’s office that investigates 30 to 40 cases a year of unidentified and unclaimed bodies, many of whom are homeless. She attempts to reunite them with their next of kin, some of whom they have not been in touch with for years or even decades.

“I love the thrill of finding the family; it’s a very rewarding part of the job,” she said. “When you are dealing with death, not everything is rewarding.”

Many of these cases are emblematic of the lives of the homeless in Milwaukee. Some struggled with mental illness. Others were alcoholics and drug addicts. Most had not been heard from by family and friends in years. They died alone and their bodies were found in parks, under viaducts and on sidewalks. Some drowned while others froze. Most had very few worldly possessions, maybe just a few dollars in their pockets and the clothes on their backs.

Some of the city’s chronic homeless men and women are regular clients of Mr. Bob’s Under the Bridge, an outreach program of Advent Lutheran Church, that hands out toiletries and clothing each weekend in Zeidler Park. Bob Burmeister, who runs the organization, gets to know them and hears through the grapevine when one of them is in trouble or dies.

“When you think of a coroner’s office, you think they don’t care. That’s not true in Milwaukee,” Burmeister said. “They could just say, put them in a box and put them in the ground. But they have compassion and heart and a death means something to them.”

The County of Milwaukee budgets less than $400 for each unclaimed body handled by the medical examiner. A Wisconsin statute requires medical examiners around the state to make an effort in notify next of kin of their deceased family members, Penn noted.

The job of identifying homeless individuals who have died begins at the scene, where, hopefully, a driver’s license or some other identification is found to point to who they might have been. Investigators and detectives then search the Internet, using genealogy sites, and calling veteran and Social Security officials in Washington D.C. They also reach out to area schools, prisons and health care providers in the area, to try to piece together the deceased’s identity and find their relatives, explained Penn.

“I view them as a challenge. I think about how sad someone’s life went that way, but I also try to understand it,” she said. “They are deceased, I can’t fix that. But what I can do is find family. Whether or not they want anything to do with the burial, at least I have a sense of accomplishment that the family was found.”

Through a driver’s license and Veteran Affairs records, Penn positively identified the man in the shed as Randy Buch. A 53-year-old veteran, Buch was treated years ago at the Clement Zablocki VA Medical Center for addiction. Penn identified him and tracked down family members who had not seen him for 17 years, all within a day.

Other cases are not as easy to close. On Nov. 11, 2012, an 11-year-old volunteering in a clean-up effort near the McKinley Marina found a human skeleton lying on a shower curtain in the woods. Investigators spent five months solving the mystery of the deceased’s identity, an effort that included running DNA tests and sending the skeleton to the University of North Texas Center of Human Identification’s Lab of Forensic Anthropology. The search also involved more than a dozen interviews with possible family members, calls to the University of Wisconsin Registrar’s Office and Marquette Dental School and futile inquires at more than half a dozen hospitals in the area. After five months, investigators determined the remains belonged to Harry Bubolz, a 70-year-old veteran, who earned a degree in economics from the University of Wisconsin in 1964.

“Where it takes months to find family, those are the ones that stick out in my mind,” Penn said. “The key is to never give up and keep going.”

Paul Ellis appreciated the compassionate effort made by the examiner’s office. Ellis is still shaken when recalling the police visit that informed him of his 55-year-old brother Allen’s death four months earlier, on July 4, 2012. Allen Ellis was found on the sidewalk in the 1000 block of East Lyons Street. Paul Ellis said his brother led a rough life, but he thought Allen was getting by until he heard the news of his passing.

“We were devastated, but it was nice to have closure,” he said. “It meant a lot to us.”

Cases involving individuals who have common last names and those who seem not to have any connections to the local community tend to be tougher to solve, said Penn, who has been with the coroner’s office for 17 years. The key to success in finding next of kin is thinking like a genealogist and working backwards through their lives, starting with the most current possible connections, she explained. A former county hospital nurse, Penn said she has failed to solve only one or two cases out of the 100 she has worked on during her tenure.

“They are not heartbreaking,” Penn added, “Because I have been doing this so long, I would have [had] my heart broken too much.”