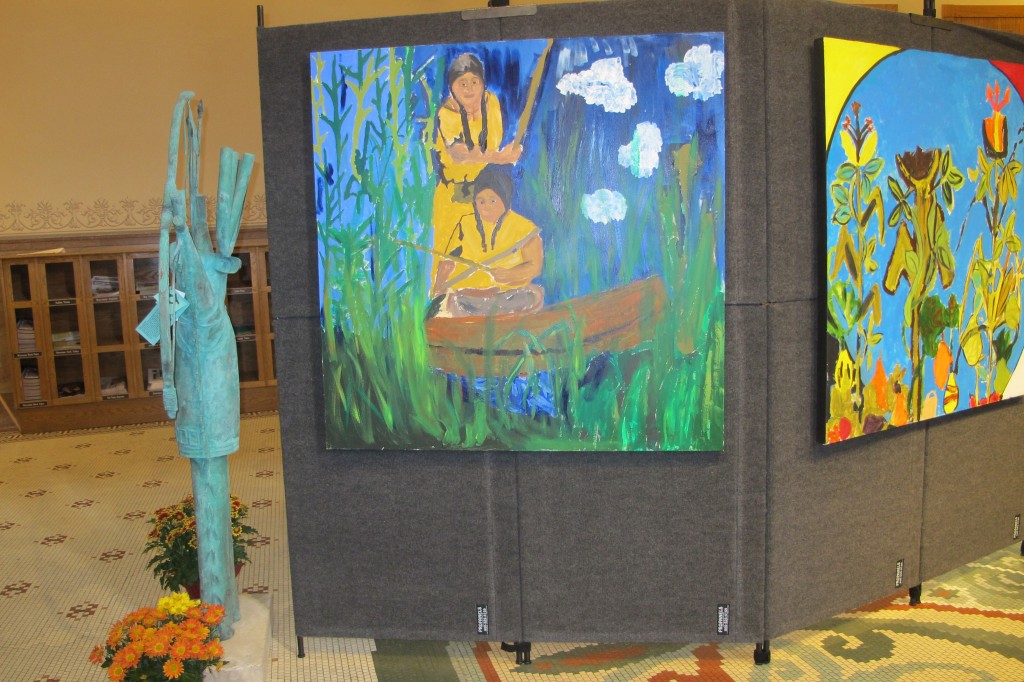 The vibrant paintings on display at City Hall were created by youth at the Urban Ecology Center in Menomonee Valley this summer. (Photo by Raina J. Johnson)

Ayla May Boyle, the artist who organized the exhibit, said she gains inspiration for her work from Native American culture. She grew up in the Upper Peninsula of Michigan and spent much of her childhood near reservations. “We want to give to the community as much as we can,” Boyle said. “This project is a way to … inspire people to look forward,” she added.

John Cook, executive director of the Native American Awareness Project, said having the exhibit at City Hall means a lot to the native community. 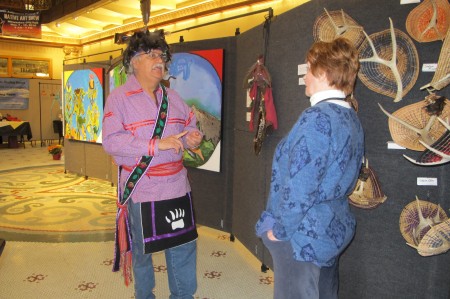 Jim Kelly, an academic advisor for the First Nation Studies Program at Milwaukee Public Schools, played his flute at the exhibit. (Photo by Raina J. Johnson)

Alderman Nik Kovac praised the exhibit. “The more we can bolster native voices, not just culturally, but economically as well, [the] better for everyone in the city,” he said. Kovac is vice chair of the Milwaukee Arts Board.

Gracelyn Wilson, an organizer with the Northwest Side Community Development Corp., stopped by the exhibit after a meeting. “I learned a few things and I love history. I mean, it’s Milwaukee, it has all the (native) names. How can people not acknowledge the work of Native Americans?” she said.

The exhibit features musical entertainment daily from 12 to 1 p.m. On a recent weekday, Jim Kelly played a flute made out of oak.

“We don’t use sheet music. Every song I play is different. It’s a gift for the audience,” he said. Kelly is an academic advisor for the First Nation Studies Program at Milwaukee Public Schools.

“We’re in the schools, working with Native American kids,” Kelly noted. “They sometimes have a lot of questions, and we help them navigate through them. I also sit with them and teach them about our traditional beadwork. They want to learn and they show up,” Kelly said.

Activities such as the Native American Awareness Project work to bring people together, Cook said. Referring to how artwork was selected for the exhibit, he said, “We try to be above the bar so everybody can have a chance.”

When the exhibit closes at City Hall, the facilitators hope to set up a native market, Cook said.

“We’re trying to create new conversations, because we’re in a new time. For the native community to grow, we have to think differently,” Boyle added.