When Jane Chu, chairman of the National Endowment for the Arts, visited Wisconsin recently, she toured a Dia de los Muertos ofrendas exhibit at the Latino Arts, Inc. gallery and attended a performance of the Latino Arts Strings Program in the auditorium at the United Community Center.

Chu listened intently, then smiled and enthusiastically applauded the orchestra made up of Bruce-Guadalupe Community School students and alumni. Chu said she and the NEA, a major funder of Latino Arts, are “very proud of the program here.” 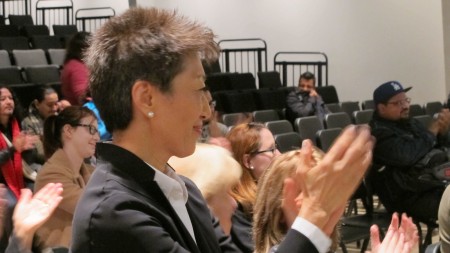 “The arts are one of the greatest equalizers,” Chu said, referring to their importance to low-income, central city residents. The arts provide some of the best opportunities for people from all walks of life, income levels and cultural or ethnic heritages to express themselves, she added.

Latino Arts, Inc., an independent non-profit organization housed in the United Community Center, 1028 S. 9th St., offers music and visual arts education to students at Bruce-Guadalupe school. In addition, Latino Arts brings performers and the work of visual artists from around the nation and the world to UCC.

The group’s mission is to showcase the best of the arts of Latin America, the Spanish peninsula, the Caribbean islands, Hispanic Americans and North Americans who have an affinity with the Latino culture, said Zulay Oszkay, Latino Arts’ artistic director.

Though the financial climate has not been favorable to the arts in recent years, Oszkay said she strives to bring the highest quality art that she can find within the organization’s means. “There’s a lot of good stuff out there. …We’re a small place but we make a lot of noise with our performing arts,” added Oszkay, a Venezuelan native who has served in her position for 21 years. 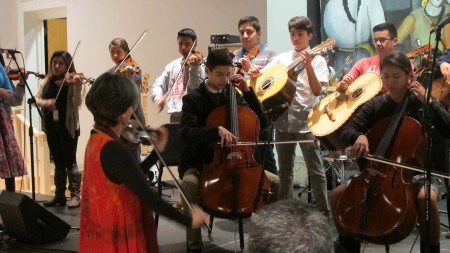 Dinorah Marquez conducts students in the Latino Arts Strings Program in a performance at the United Community Center. (Photo by Andrea Waxman)

The Latino Arts Strings Program, an in-school and after-school classical music education program under the direction of Dinorah Marquez, engages more than 150 participants between the ages of 5 and 17. Students play in the classical Latino Youth Orchestra, the Mariachi Juvenil or the Mariachito, all string orchestras or in same-instrument ensembles. In addition to winning musical performance awards, participants consistently excel in academic performance, according to the Latino Arts Web site.

Oszkay noted that Latino Arts welcomes students from around the metropolitan area to its performances and exhibits. In addition, the organization offers student workshops in conjunction with its events.

For Dia del los Muertos, Latino Arts contracted with local artists of Mexican descent to teach eight workshops on the traditions of the ofrendas (offerings). Ofrendas are displays created to remember and honor the memory of ancestors. Workshop teachers showed students how to do traditional paper cutting and create small ofrendas. Ofrendas created by students from University School of Milwaukee were included in the gallery exhibit. Next year, Riverside High School students will be featured, Oszkay said.

The last program of the fall season is slated for Friday, Dec. 5. Latino Arts will stage GlamourTango, an all-female tango ensemble led by Uruguayan pianist and musical director Polly Ferman. A tango-inspired painting exhibition, Tango Colores by Pacia Sallomi, will open in the gallery the same day.

Student matinees will be offered on Dec. 4 and Dec. 5, and tango workshops for students are planned for February.