You are here: Home / Home / Carousel / Youths go from ‘boys in the hood’ to ‘gentlemen on the town’
Share this... 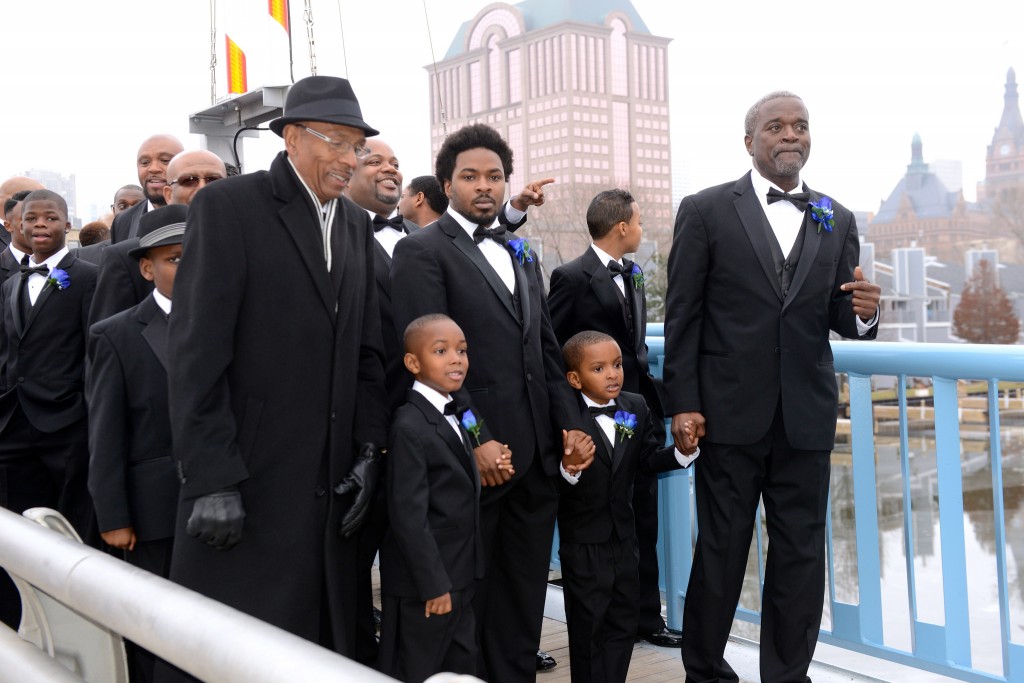 Andre Lee Ellis (right) crosses the bridge on Juneau Street, along with 50 young men and boys and their mentors, on the way to Carson’s restaurant. (Photo by Sue Vliet)

One hundred men and boys, ranging from 6- to 79-years-old, milled around a large upstairs room at Redemption Fellowship Church on the North Side. In one corner, a barber was cutting a teen’s hair. Along a wall, racks of tuxedos hung in brown garment bags. A line of boys waited for a volunteer to pin blue boutonnieres onto their lapels. Boys and men sat at tables writing letters and sealing them in envelopes to present to each other at the end of the day.

This scene marked the final preparations for the latest event in Andre Lee Ellis’s “We Got This” grassroots program to support and mentor young black men in his neighborhood, around 9th and Ring streets. On Saturday afternoon, Ellis gathered the 50 young men and 50 mentors together, encouraged them to continue supporting each other and their community and led them onto two buses that took them downtown.

At Juneau Avenue east of the river, they disembarked and paraded across the bridge, amid cheers and chants of “black lives matter” to Carson’s Prime Steak & Famous Barbecue, 301 W. Juneau. There the tuxedo-clad “boys from the hood” became “gentlemen on the town.” Each young man was to sit with his mentor and enjoy a formal dinner, conversation and a bit of an etiquette lesson. An unnamed sponsor paid for the dinners, and each mentor covered the cost of his own and his mentee’s tuxedo rental. 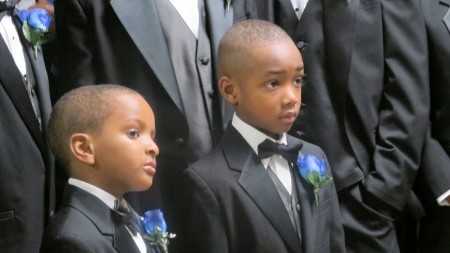 Roshaun Collins, 13, a sixth-grader at Dr. Martin Luther King Jr. Elementary School and a member of Ellis’ “We Got This” group since last summer, summed up Ellis’ program.

“People where we come from don’t make it far and Mr. Andre is showing us that we can,” Collins said.

Isaiah Lavender, 13, a seventh-grader at LaFollette School, 3239 N. 9th St., met Ellis while walking to a corner store last spring. Ellis asked him to join the group. Lavender said he enjoyed helping out in the neighborhood. “All the trash that’s on the ground, it didn’t look right.”

Dwight Willis, 14, another Lafollette student, met Ellis at school. Willis called Ellis “a good man,” adding, “[He] meets with us and talks about stuff like being respectful.” Willis said he “joined up early” with We Got This, working in the garden.

The dinner at Carson’s was the latest in a series of activities designed and carried out by Ellis since he started employing young men to maintain a neighborhood garden and clean up the community last summer.

Like the Pied Piper of Hamlin, the charismatic Ellis drew more and more young followers throughout the summer. He created a structured program, paying the young men $20 if they showed up before 8 a.m. and worked the whole morning. As his numbers grew, people began to notice.

Ellis dubbed the program “We Got This” on his Facebook page, and emphasized the need for the black community to support its own children. Ellis began to draw adult supporters who contributed money to pay the young men and to talk with them about their own experiences growing up in similar communities. Momentum grew throughout the summer and by the end of August more than 100 young men had joined in.

The program is less active with school in session but the young men keep in touch with Ellis and each other. Since summer ended, Ellis has taken them to a Brewers baseball game, to UWM to accept an award, and to see President Obama when he visited North Division High School in October.

The Rev. Anthony Caples, one of the mentors, found “We Got This” through Ellis’ Facebook page and started visiting the garden on Saturday mornings when there were just eight or nine participants. Caples noted that one-on-one mentoring relationships are necessary for young people to grow and flourish.

“I think this is the beginning of building community,” Caples said.