Christmas came early for Annie Naomi Scott, founder of the Scott Christian Youth Center, 2741 N. Teutonia Ave., when she learned she was the recipient of a soup kitchen makeover in June.

“I never thought anything like this would happen to me,” said Scott, who has made it her life’s mission to provide food, clothing and spiritual guidance to the poor of Milwaukee. Scott’s four decades of service have earned her the title of “mother” throughout the Lindsay Heights neighborhood where the center is located.

“What Mother Scott does day in and day out is just incredible,” said Ben Minkin who co-owns Fein Brothers, a local food service equipment and supply dealer, with his cousin, Todd Minkin. Fein Brothers celebrated its 85th anniversary by offering a free kitchen makeover for a local charity.

“We have been in business for 85 years and it’s all because this community has been so good to us, so we really wanted to give back,” explained Todd Minkin.

The Scott Christian Youth Center was one of 33 area charities to apply for the makeover. The Fein Brothers’ staff and project sponsors narrowed the field of applicants by voting for the top five candidates. Ben and Todd Minkin then visited the kitchens to assess their needs. 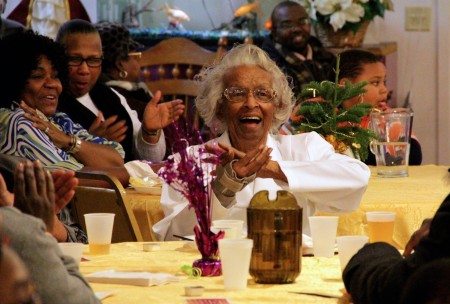 Annie Naomi Scott enjoys a round of applause during a dinner that celebrated her winning a soup kitchen makeover. (Photo by Molly Rippinger)

“There are so many organizations like this that need help,” explained Todd Minkin, who said it was no easy task choosing the winner.

When the Minkins visited the Scott Christian Youth Center, they saw broken appliances and outdated equipment. Through contributions by their vendors and in-store donations, Fein Brothers was able to install $45,000 worth of equipment that included three industrial ranges, a refrigerator and freezer along with other kitchen appliances. The makeover was completed in November, and to celebrate, the staff at Fein Brothers cooked and served dinner for the Scott Christian Youth Center community.

“I really think Todd and Ben fell in love with this place and the people,” explained Jackie Bordak, administrative assistant at Fein Brothers.

Todd Minkin said it “means the world to us to be able to give back and to know that Mother Scott and the kitchen will be in business for many years to come.”

Scott moved to Milwaukee in 1951 and was well respected as one of Milwaukee’s first African American beauty salon owners. In 1964, she had a spiritual vision that called her to provide faith-based guidance for area youth. A decade later, Scott and her husband, Joseph Scott, opened the doors to the Scott Christian Youth Center.

“There was such a great need,” explained Scott. “I didn’t fully realize it myself until we opened.”

In 1983, the center expanded to include a hot meal program, emergency food pantry and clothing bank. It also provided mothers with baby formula and food, and ran a crisis hotline. Religious services were added in 1987 when Scott established the Outreach Church of God in Christ. Scott has continued to run the center since the death of her husband in 2002. 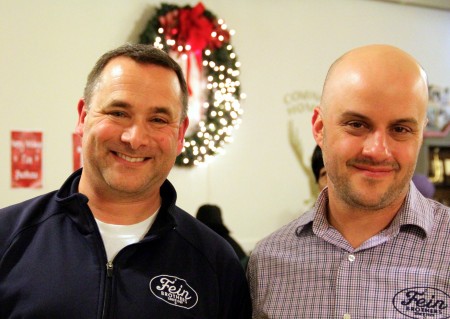 “She’s been a trailblazer for African American women,” explained Oliver Sellers, Scott’s grandson. “She was one of Milwaukee’s first female pastors and started the Scott Christian Youth Center to provide a good, healthy atmosphere for people in the community.”

Dinner is served to the community Sunday through Thursday and breakfast is also available Monday through Friday. All food is provided through donations and prepared on-site.

The Scott Christian Youth Center also provides employment opportunities for community members. Victor Toney has had a job serving the evening meals for the past year. “I live just a few blocks away so working here is perfect,” said Toney, who grew up in the neighborhood and was placed at the center through an employment agency.

Scott sympathizes with those who are in need of a hot meal because she experienced the hollowness of hunger firsthand as a young child growing up in Alabama.

“I remember being so hungry that it seemed like my stomach was all the way back to my backbone,” said Scott. “That was an experience I never forgot.”

Curt Boyd, pastor of the Way of the Cross Missionary Baptist Church, praised Scott for her dedication to the poor and hungry. “This center is truly the heart of Jesus,” said Boyd, whose church is located across the street from the center, at 1401 W. Hadley St.

Sellers explained that all donations are given directly to those who need it most. “Everybody comes through the doors here because everyone needs something,” he said. He added that his grandmother was determined to make a difference in her community.

“My body physically gets tired and mentally I get so exhausted,” explained 88-year-old Scott, “but I … haven’t heard the word to stop yet. I really love people and I know that is a love God gave me.”