You are here: Home / Home / Carousel / Riverworks’ successes brighten future of northeast side
Share this... 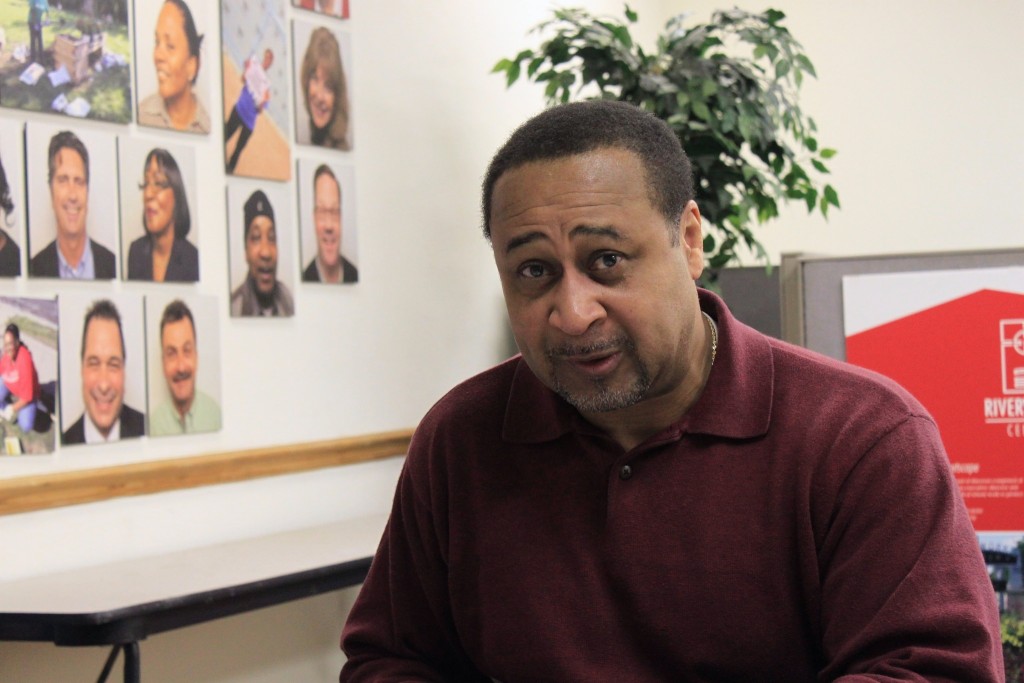 CTC Supplies, a manufacturing company on the northeast side, wanted to buy a new building in the neighborhood in 2009, but was hesitating over city requirements to make fencing and landscaping improvements. When Chris Grandt, director of neighborhood development at Riverworks Development Corp., was making the rounds talking with business owners, he told CTC about façade and landscape improvement grants available through Business Improvement District #25, one of two BIDS run by Riverworks.

“Riverworks educated us about working with the city and what’s available in grants,” said Sandy Woycke, CTC CEO. “They really impressed me and helped us, so I wanted to give back by getting involved with the board.”

Today, CTC Supplies employs about 12 people at its manufacturing plant at 3845 N. Bremen St. in Riverwest The company specializes in janitorial supplies and Woycke is a board member of BID #25.

Small manufacturers such as CTC Supplies, have proliferated in the BID in recent years. “Riverworks has the reputation of being a go-to organization for getting things done,” said Leo Reis, executive director of LISC Milwaukee. The organization has garnered confidence from the business community as well as credibility in the neighborhood, he said. It has also drawn the attention of funders.

In recent months Riverworks has announced two significant new investment agreements to support its neighborhood development work. The Kresge Foundation awarded a $725,000 grant to Riverworks and its partner, the Harambee Great Neighborhood Initiative, through a partnership with the Greater Milwaukee Committee. 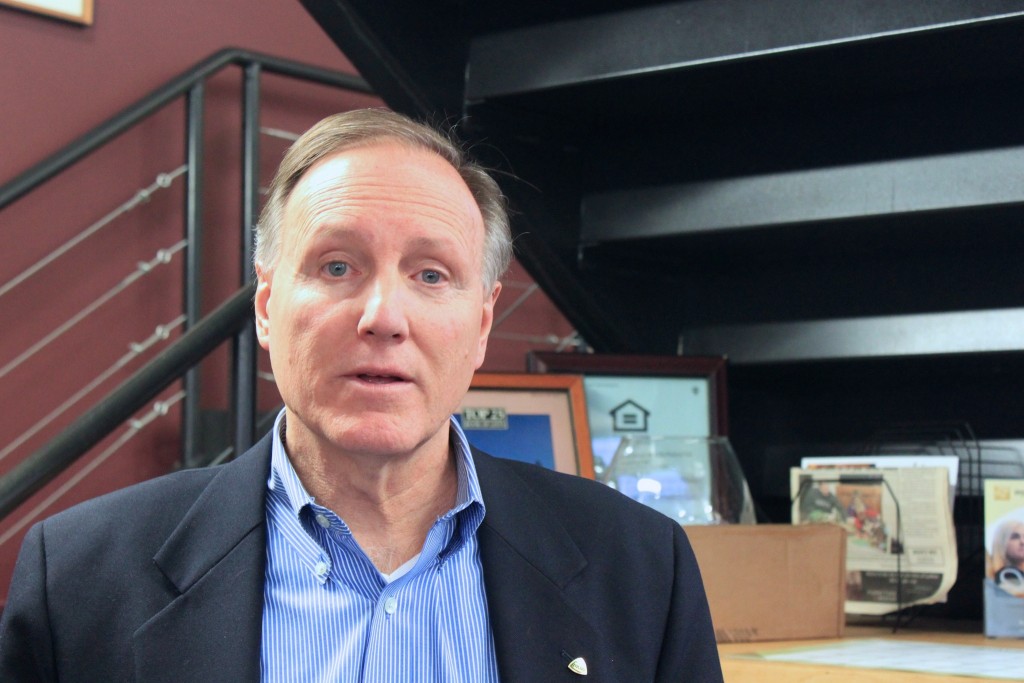 Bob Gintoft, Riverworks Development Corp board member, said the organization’s ability to collaborate distinguishes it from other groups. (Photo by Matthew Wisla)

In addition, the Greater Milwaukee Foundation brought Harambee and Riverwest into the Healthy Neighborhoods Initiative along with six other neighborhoods already in the program, including Layton Boulevard West, Sherman Park and Capitol Heights. The initiative provides technical and financial support, and the city contributes up to $10,000 in matching grants.

At its inception in 1991, Riverworks focused on industrial development across a 10-block area of the Harambee neighborhood that had recently lost a large American Motors Corp. car factory, according to board member Bob Gintoft. Soon it expanded its reach to include all of Harambee and Riverwest. BID #25, where CTC Supplies is located, was created in 2000, and #36 was created in 2005.

Today, Riverworks is looking to broaden its reach again with plans to link with businesses along its borders in Shorewood and Glendale. “We have people who work and shop in Bayshore and on Oakland Avenue, and they have people who frequent our businesses along east Capitol Drive,” said Darryl Johnson, executive director of Riverworks since 2003. He added that the organization is reaching out to nearby businesses to understand their employment needs and how neighborhood residents could fulfill them.

Much of Riverworks development in recent years has been based on small retail or manufacturing businesses. “We have a tested market already where people come in and do things on a small scale,” Johnson said.

The Kresge investment is intended to spur further development. “Kresge has a number of models for integrating art and culture as a community development tool to bring more investment and small business development,” Johnson said.

When retail mogul S.S. Kresge established the foundation in 1924 he decided to focus its giving on building and maintaining existing nonprofits instead of launching new ones. Despite his wealth, Kresge had a reputation for frugality, reportedly giving up golf because he couldn’t tolerate losing balls. Today the Kresge Foundation is a $3 billion fund focused on carefully targeted investments that create opportunity for low-income people, according to reports and its website.

Johnson plans to use the Healthy Neighborhoods designation as an opportunity to focus grassroots efforts on changing how residents perceive their neighborhood. One “early action project” under consideration would be to recognize homeowners who do an outstanding job maintaining their property. An award could come with a gift card to a home improvement store. The recognition would set an example for others and provide an incentive for keeping up homes and lawns.

“It’s a win-win for us to connect with the Greater Milwaukee Foundation and other neighborhoods that have been part of the program for a while,” Johnson said. “We get to see what they have done right and some things they have done wrong. The key is how you get people to start thinking differently about where they live.”

Johnson, 55, is unassuming and soft spoken. Despite his quiet demeanor, he demonstrates the decisiveness of an executive who has been developing neighborhoods and leading community organizations in Milwaukee for 32 years, beginning with the Parkside Housing Cooperative in 1983.

Even before taking the helm at Riverworks, Johnson was concerned about how the physical environment in a neighborhood shapes people’s perceptions. He believes boarded-up storefronts and narrow windows make neighborhoods feel closed, static and uninviting. He is a stickler about windows.

“When we start working with businesses we see if there’s a way to open up as many windows as possible,” Johnson said. “It sends a different vibe throughout the whole community.”

When it comes to investment funding, Johnson is particular about the grants he seeks. “We don’t chase money; I don’t believe in it,” Johnson said. Instead, his philosophy is to listen to residents and focus on their needs, pursuing only the investments that make sense for the community and being open to opportunities when they ally with local interests.

Although Riverworks began with a focus on industrial development, it now looks at community development holistically. “We work with CEOs and business owners, and we also work with people in our neighborhoods who are in despair: people who need assistance and a leg up,” Johnson said.

Most initiatives undertaken by Riverworks include partnering with allied organizations or the city. Last October, Riverworks was among 11 organizations nationwide to receive a safety award from the MetLife Foundation and LISC for its partnership with the Milwaukee Police Department to reduce crime in Harambee. The alliance between Riverworks and the police helped reduce crime across a five-block area, according to LISC. Other accomplishments LISC cited include developing the Beeline recreational trail along a section of the Milwaukee rail corridor in Harambee, and building a Kaboom! playground.

As the needs of local employers and neighborhood residents evolve, Riverworks programming has remained flexible. The organization recently phased out a long-running collaboration with MATC that trained metal press operators. Changes in manufacturing technology and offshore manufacturing had all but eliminated the need for that vocation in the U.S. Riverworks recently launched a new program that facilitates job placement by working to understand the needs of local employers, and matching prescreened residents with job opportunities.

Riverworks Cleans is a workforce enhancement program pairing the organization with the city to maintain city-owned lots. Most of the workers have barriers to employment, such as criminal records. Participating in the program helps demonstrate their willingness to work and makes them more attractive to employers, according to Johnson.

Between last August and December these and other Riverworks programs averaged more than one job placement a week, a strong showing at a time when there are limited employment opportunities in the city, Johnson said. In all, the organization helped 34 neighborhood residents find work.

Working with a wide range of partners has intensified the need for Riverworks to measure programs and report results. “We are a data-driven organization,” noted Grandt.

Riverworks keeps tabs on city databases of foreclosed and tax delinquent homes and businesses in its neighborhoods, as well as generating its own metrics for resident engagement and all its programs, according to Grandt.

The organization also compiles monthly data for LISC on changes in the net worth of residents, income levels and credit scores, according to Reis. LISC supports Riverworks’ Financial Opportunity Center, which provides financial coaching and education along with information about public benefits, such as the Affordable Care Act, to unemployed or underemployed residents.

The success of the Financial Opportunity Center helped prompt a planned move later this year to a new headquarters more than twice the size of its current location at 526 E. Concordia Ave. Plans are still being drawn up, but it’s safe to assume that the building will boast plenty of large windows.