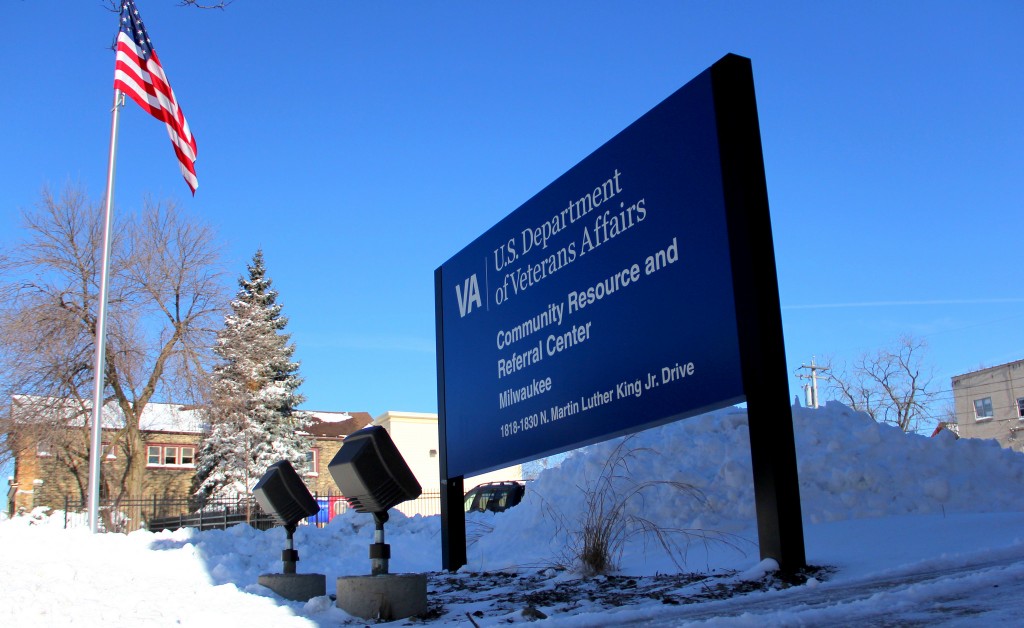 The building that now houses the Community Resource and Referral Center was built in 1925 and originally housed a moving company that used horses and carriages. (Photo by Molly Rippinger)

Editor’s note: This article is one of an occasional series profiling the 14 finalists for the Milwaukee Awards for Neighborhood Development Innovation (MANDIs). The Department of Veterans Affairs Community Resource and Referral Center is a finalist for the State Farm Building Blocks Award, which recognizes a real estate project that enhances the community.

For Allena Flood, experiencing homelessness was both a blessing and a curse. Flood, who served in the Navy as an information systems technician from 2000 to 2008, had fled domestic violence along with her three children.

She sought refuge at the U.S. Department of Veterans Affairs Community Resource and Referral Center (CRRC) in Milwaukee, where the staff assessed her situation and formulated a plan that helped her tap into a wealth of resources.

“I can’t even begin to tell you everything that they have done for me to make sure that I have gotten back on track,” said Flood, 33. 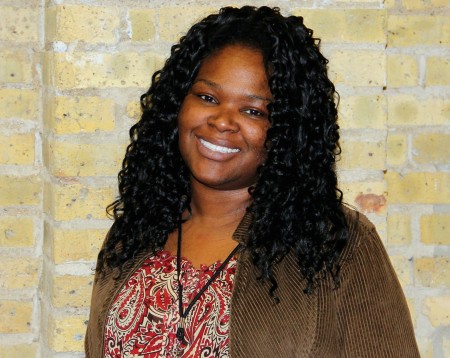 Allena Flood, a Navy veteran, was homeless last year, but through VA resources was able to get back on her feet quickly. (Photo by Molly Rippinger)

In three months, Flood found a renewed sense of security with the help of the VA. Through the resources at CRRC, she received assistance in finding and furnishing a home, obtained legal counsel to address her domestic violence situation and got a government job as a regional claims assistant for the Milwaukee VA Pension Center. “Everything I lost, I have back all over again,” said Flood.

“I don’t think people realize what the VA does in terms of helping veterans,” she added. “Whenever you find yourself in a bad position, or even if you just need someone to talk to that understands what you go through, the VA is there.”

CRRC opened its doors at 1818-1830 N. Martin Luther King Jr. Drive in December after a two-year restoration of the historic building, which was sitting vacant at the time of purchase.

Barbara Gilbert, program manager of the Milwaukee VA Medical Center, explained that her CRRC staff was conducting community outreach in the year leading up to the official opening of the new facility. “The CRRC is such a wonderful place for veterans to come and receive concrete resources,” said Gilbert. “Still, quite a bit of our work is on the streets or under bridges trying to reach all veterans.”

CRRC offers veterans access to basic resources, such as showers, laundry and food. Certain health care services also are available and there soon will be computers for veterans to use for job searches. “Veterans can walk in off the street and take care of themselves here,” said Flood.

“To some extent, we’ve done a great job of ending homelessness because we’re not finding the same high number of veterans on the streets,” said Gilbert. HUD defines unsheltered homeless as those residing in places not meant for habitation, such as abandoned buildings or on the street, and sheltered homeless as people living in emergency shelters or transitional housing.

CRRC focuses mainly on the needs of veterans in Milwaukee County, but Gilbert explained that the center helps any veteran who walks through the door. The new Milwaukee facility joins a network of 26 CRRCs located in other major cities across the country. 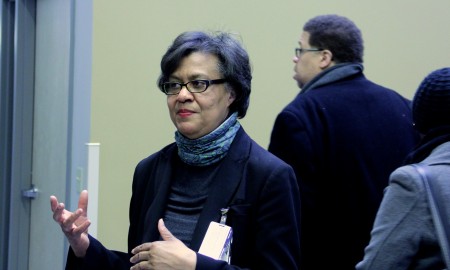 Barbara Gilbert, program manager for the Milwaukee VA Medical Center, oversees how aid is administered to veterans who are homeless or at risk of homelessness. (Photo by Molly Rippinger)

Burton Metz, vice president at Wangard Partners, Inc., worked with the VA to find the site for the center and helped lead the $2.4 million restoration project. The building, which was constructed in 1925, originally housed a moving company that used horses and carriages. Throughout the decades, the space was also an auto repair shop and a media studio.

In order to maintain the historic integrity of the 7,500-square-foot building, which is registered at the state and national level as a certified historic building, great care was taken to restore original elements, such as the overhead door. The original single-pane windows in the garage door were painstakingly replaced to meet LEED (Leadership in Energy & Environmental Design) standards, a green building-certification program. “We had to keep the same look, but increase efficiency,” explained Metz.

Scott Drees, director of construction at Wangard Partners, helped coordinate the teams of consultants that focused on things such as energy efficiency, electrical and plumbing systems. “We’re proud to say that over 90 percent of the waste during construction was recycled or repurposed,” said Drees. He noted that even soil from the original horse stables was saved during demolition to be used for garden beds located behind the building.

Jerome Knapp, executive director of the King Drive Business Improvement District, said CRRC is a welcome addition to the neighborhood. “To have them come in and invest that much money into it and to have a really great organization in there is fantastic,” Knapp said.

The Milwaukee Historic Preservation Commission protects the stretch of Martin Luther King Jr. Drive between North and McKinley avenues to preserve the historic integrity of the buildings.

“It’s important for those buildings to be maintained from an historic perspective, but also just to keep intact the fabric of the neighborhood,” said Knapp, who realized the importance of the historic district distinction after many of the buildings north of North Avenue were demolished during the 1980s. “Maintaining the historic buildings throughout our district has always been important, and having developers come in and recognize that is fantastic,” said Knapp.

“Hopefully, our efforts here work as a catalyst for more development between North Burleigh down to Schlitz Park,” said Metz, who noted both the strength of the King Drive community and the need to help continue revitalization efforts.

CRRC is the third resource focused on veterans in the King Drive BID. The others are VETS Place MLK, which provides transitional housing for a dozen homeless or low-income veterans, and the Center for Veterans Issues, where veterans can find numerous services and resources.

For veterans such as Flood, the people and facilities at CRRC have made all the difference, and she is now ready to “pay it forward” to other veterans who might be facing similar situations. “I want to give veterans the same assistance and level of professionalism that I’ve received,” explained Flood.