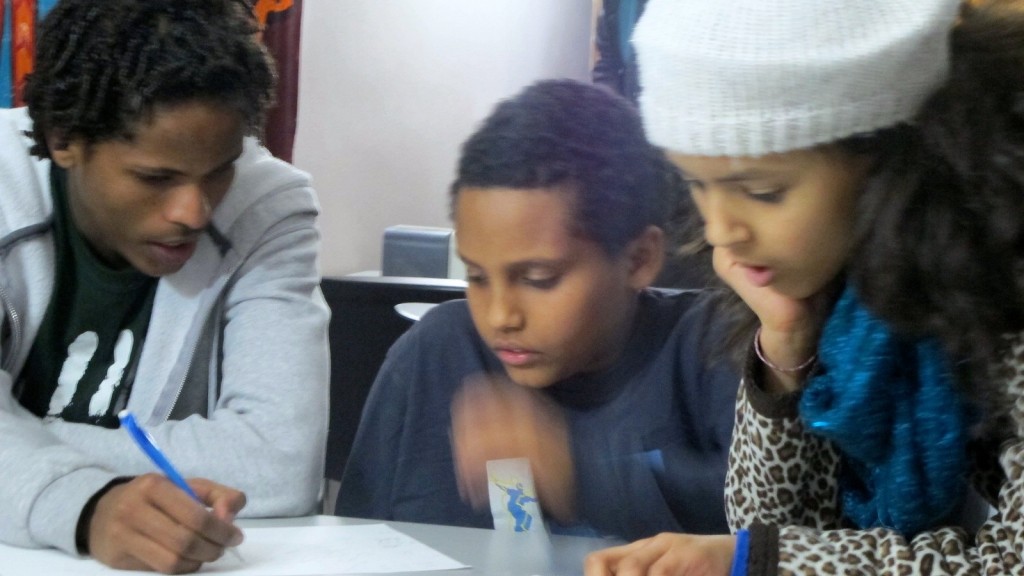 (From left) Filimon Hailu, 17, tutors Mulubrhan Yosief, 9, and Saron Weldemariam, 10, during an after-school session at the Pan-African Community Association. (Photo by Andrea Waxman)

Editor’s note: This article is one of an occasional series profiling the finalists for Milwaukee Awards for Neighborhood Development Innovation (MANDIs). The Pan-African Community Association is a finalist for the BMO Harris Bank Cornerstone Award, which recognizes an organization for tenacious commitment and effectiveness.

Wendmy Nida Moyenga entered Washington High School as a sophomore several months after emigrating from Burkina Faso, a country in sub-Saharan west Africa. She started her morning in the school’s English as a Second Language class and made friends there. After the first hour, however, she had to plunge in to regular high school classes. Then 16, Moyenga found the language and cultural differences challenging, but was most upset by the bullying.

“There were some days when I didn’t want to go to school,” said Moyenga, 21. Students made fun of Africans, who they believed didn’t have houses and lived among animals, she added.

Though life at school didn’t improve much until the next year, Moyenga said she forced herself to focus on her studies. “I put in my mind (that) I’m not here for them,” she said. “I’m here to learn.” 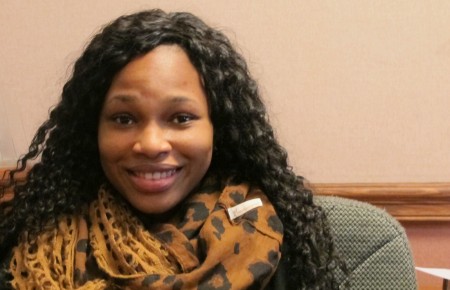 After that first semester, Moyenga connected with the Pan-African Community Association (PACA). There she found a supportive environment and a lot of practical help with English and homework. PACA’s business club also captured her interest.

Providing people of African descent in Milwaukee with a community dedicated to preserving and enriching African cultural values is a big part of PACA’s mission. And easing the transition to American life for immigrants and refugees from Africa and other countries is another part, said Fessahaye Mebrahtu, PACA’s executive director.

The business club Moyenga joined helps youth acquire employment and entrepreneurial skills. In addition to running a community garden, the youth operate an occasional farmers market and do other volunteer work in the community. PACA employs the teens in the summer to teach the younger kids, said Michael Grochowski, education program director.

“We want to give them the experience of being the ones who serve,” Grochowski said.

The after-school and summer programs focus on developing leadership skills. “We all see how great these youth are. They are capable of stepping up and becoming leaders in the community and we want them to realize that,” Grochowski added.

Hailemariam Yosief also found help at the community association. A former food store owner in Asmara, Eritrea, Yosief was a winner of the Diversity Immigrant Visa Program lottery and came to the U.S. in September 2010. His wife and six children followed two months later. Yosief visited several cities before he settled on Milwaukee, where he has four cousins.

Yosief, who has been making pizzas at a popular East Side pizzeria for more than three years, said his family has benefited the most from PACA’s after-school tutoring program.

He said he came to the U.S. for his children, not for himself. “(In Eritrea) the government is bad. There is not enough freedom and not a good future for my kids,” Yosief said. 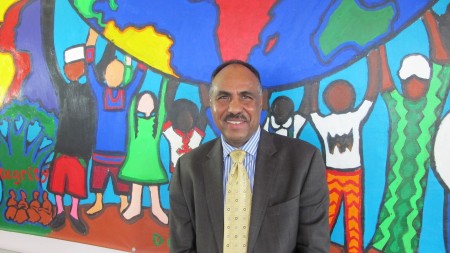 Believing that education is the key to a successful future, Yosief has high expectations for his children’s academic performance. “(My kids) know why we came to America. They know they must work hard,” he said.

Yosief is a volunteer driver for the after-school program, picking students up at their homes in a PACA-owned van and taking them to the association at 4063 N. 64th St. After the session he drives them all home. When the organization can manage it, he receives a small stipend.

Last year, when Yosief was ready to buy a house, PACA referred him to ACTS Housing for help. After six months of looking, he bought a duplex on the 3600 block of 94th Street. ACTS helped him with the documents and credit history and PACA also provided support.

For refugees and immigrants such as Yosief, “the goal is to be self sufficient in a very short time,” Mebrahtu said. Eight months after their arrival, all government assistance except food stamps expires, so learning English and finding employment are critical, he explained. PACA also connects new immigrants to the social services they need.

As a refugee resettlement agency that receives federal funds, PACA is required to assist refugees from all countries. Since 2010, the organization has helped resettle about 600 refugees from the Democratic Republic of Congo, Eritrea, Ethiopia, Somalia, South Sudan, Sudan, Burma, Iraq and Bhutan, he said. More than 60 percent of the refugees PACA has helped are Burmese, according to Mebrahtu.

While the majority of African immigrants and refugees in Milwaukee are concentrated on the Northwest Side, the Burmese and Iraqi communities have settled on the South Side. For about six months in 2013, PACA operated a second location in Our Lady Queen of Peace Catholic School, 2733 W. Euclid Ave. Mebrahtu said PACA was unable to continue funding that office but he still hopes to re-establish an after-school program for South Side children.

Among the challenges PACA’s clients struggle with, Mebrahtu noted, are unrealistic expectations about America and a longing for home.

After a visit to Burkina Faso last summer, Moyenga said it was difficult to return to Milwaukee. She said she did so because “I feel I have more opportunities here for education and a career.” PACA helped Moyenga with her college applications and she is now a sophomore at Mount Mary University majoring in biology and health sciences. She hopes to become a pharmacist or medical doctor.

Through a university work/study program she is now employed for 10 hours a week at PACA. Fielding phone inquiries and tutoring younger students help her improve her communication and leadership skills, she said.

“I feel I can be a role model for (the children.) They can see that if they work hard, they can get scholarships and go to college.”