You are here: Home / News / Arts and Recreation / With Swing Park, city hopes to look forward, not back
Share this... 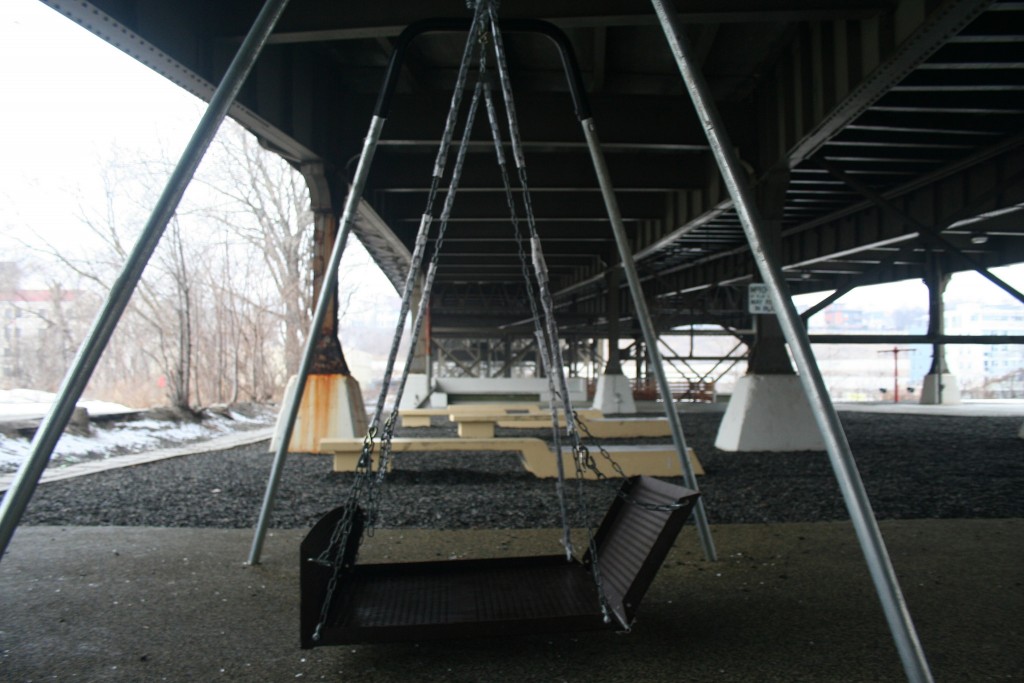 “Aunt Ada,” a handicap accessible swing, which was installed during the 2014 redesign of the Swing Park, sits in front of the remaining benches from the old Media Garden. (Photo by Jabril Faraj)

This article is one of an occasional series profiling the finalists for Milwaukee Awards for Neighborhood Development Innovation (MANDIs). The Holton Bridge Swing Park is a finalist for the Brewers Community Foundation Public Space Award, which recognizes a public space that helps build the community.

On Sept. 9, 2012, under cover of darkness, a small group of people with an organization called be(in)tween, descended on a little-used, largely forgotten space at the south end of the Marsupial Bridge under Holton Street. The cohort of about a dozen friends and associates installed almost as many swings, made with recycled tires and hung with rope.

Willie Fields, who was part of that group and still acts as the city’s eyes and ears at the park, said that although they “knew that it was something we shouldn’t be doing,” the group wasn’t overly worried about getting caught.

“Every swing had our name stenciled on it,” he said. “So, we knew that people were going to know who put the swings up.”

“We were thinking, you know, if they stay up for a couple days, we’re fine with that,” Fields said.

In that spirit, the swings were simply hung with rope. They took only a few hours to install.

But a week went by and nothing happened. After a few more weeks, the swings were still there, said Fields. By then, the rope used to hang them was starting to show signs of wear. So, be(in)tween, which describes itself as “a social + spatial network improv(is)ing spaces to build community,” stepped in again.

“We replaced all the ropes with cables — steel cables,” Fields said.

“Well, then it was another month and two months and three months and they were still here,” he said. “The cables started to wear so we replaced all the cables with chains.”

The “guerrilla act” was praised by some members of the community, while others raised concerns over its unofficial nature. Many also questioned the city’s reaction, either for being too accepting of an idea that didn’t go through the usual channels or for poor communication that, for many, put the future of the park in question.

However, despite a process that could have derailed the project, the Swing Park has staked a permanent claim under the Holton Street Bridge and was officially adopted by the city, re-opening at a ribbon-cutting in 2014

Keith Hayes, the founder of be(in)tween, is originally from Cleveland and found his way to Milwaukee by way of Chicago, where he was working as an architect while rehabbing and selling bikes on the side.

“In Chicago, I could sell bikes like hotcakes,” he said. “I got to Milwaukee [and] every time I tried to sell a bike I’d make a friend, because they wanted to learn how to do it.”

He developed a particular connection to that space under the Holton Street Bridge — what is now the Swing Park but was once the “Media Garden,” designed in concert with the Marsupial Bridge that was finished in 2006. Through the cycling culture he was immersed in, Hayes spent a lot of time under the bridge and began to see it in a way only familiarity can provide.

“This, to me, was such a strong intersection between two neighborhoods,” he said.

Hayes graduated from the University of Milwaukee-Wisconsin’s Graduate School of Architecture in 2012, where he had the opportunity to take a studio class with Grace La. La, who is a partner at Milwaukee-based La Dallman Architects, Inc. was, at the time, a visiting professor at UWM and, Hayes said, “one of the big inspirations in terms of my pursuit of a master’s.”

Appointed a tenured professor at Harvard’s Graduate School of Architecture in 2013, La is “an incredibly brilliant designer, incredibly successful teacher and, really, was pioneering the way the school (at UWM) was run,” he said.

Hayes said La inspired his “iterative” approach to design when she said, quite simply, that the person who drew, re-drew and re-thought a design the most would end up with the best product.

“She really cut out this idea that you’re born with it or you have this natural talent,” he said. “To me, it cemented this idea of how you might, potentially, be able to do things in public that didn’t feel permanent, that didn’t feel that they were susceptible [to] everyone’s opinion for the next 40 years.”

During the fall of 2012, Hayes was in the midst of securing funding for a project that would eventually become the artery. As a result, Hayes had a pile of tire scraps that people kept asking him to do something with.

Salvia said the bridge project was “a connectivity goal” for them because Brady Street is “a little land-locked” by the Milwaukee River and Lake Michigan. In addition, Julilly Kohler, who also works for the BID, was one of the bridge’s primary advocates.

But, since the completion of the pedestrian bridge and Media Park in 2006, the area had deteriorated. Salvia said the spot attracted homeless individuals and that “no one really felt safe there at night.”

“It just became a space that wasn’t utilized to its potential,” she said.

So, when Salvia and Kohler happened upon the swings in fall 2012, they were surprised and delighted. “All of a sudden, all these people were down at the swings and it was like the space had become alive again,” Salvia said.

As the BID’s director, though, she was concerned about the possible safety issues. So was Department of Public Works Commissioner Ghassan Korban.

Korban said the city found out about the swings through word-of-mouth “shortly after” they were hung. When alterations in public spaces are discovered in this manner, the reaction is usually “not a positive one.”

“I was concerned,” Korban said.

Safety is the biggest concern, said Korban — since existing infrastructure was used to hang the swings the city is responsible, by default. “Specific to playgrounds, there’s a very stringent set of specs and procedures that we have to follow.”

As an example, Korban cited the need for handicap accessibility and said, in regard to safety, there are “specific guidelines we have to be in accordance with.”

The city does not list the Swing Park as a playground in the 3rd Aldermanic District where it resides.

Korban eventually dispatched someone to take a look. The report came back positive — it was “more than just a couple ropes” and the installation was sturdy, said Korban. His first thought was to take the swings down immediately but they had become an immediate sensation. Eventually, though, Korban said the city spotted certain “weak links” in the chains that caused concern about the swings’ safety, and took them down.

“We started seeing failures and we just didn’t want to take any chances,” he said.

The details of what happened next are still unclear. Salvia said there was an “outcry” from the community and people started asking where they had gone. Be(in)tween fielded questions about the swings as well, said Hayes.

In response to the public reaction, a number of organizations, including Newaukee, MKE BKE, be(in)tween and the City of Milwaukee, began talks about an effort to fund some of the materials needed for a re-designed park. According to sources close to the process, “something got mixed up.” Though a website and other materials were created to promote the campaign, nothing came of it.

In addition, after published comments by Grace La bashing the swing concept, La Dallman Architects was not included in the official process of rebuilding the Swing Park. Korban called the situation “significantly adversarial” and said it “would have been counterproductive, in my judgment” to include the original designers at the table with Hayes and be(in)tween.

Korban was also quoted by the Journal Sentinel’s Mary Louise Schumacher, saying he didn’t have the resources to retain La, who had just joined Harvard’s faculty the year before. La did not respond to a request for comment.

From then on, however, the degree of be(in)tween’s involvement is also unclear.

“At that point, be(in)tween just, sort of, pulled out,” said Hayes. “We were asked not to go there any more, even if it meant maintaining the swings.”

There may have been a misinterpretation, said Korban. “They were told that the maintenance of the park is the city’s and that they should not make any repairs on their own.”

The city spearheaded a redesign — about half of the “LightSlab” benches that were part of La’s Media Garden were bulldozed to make room for a total of 11 swings. They included a handicapped-accessible swing called “Aunt Ada,” tire swings and swings for small children. The Common Council officially named the space the “Swing Park.”

At a ribbon-cutting in July 2014 members of be(in)tween were “recognized by several of the speakers as the creators of the original swing park.” It has been reported that the redesign cost the city about $26,000, which Fields confirmed; the Media Garden and Marsupial Bridge cost $3.35 million.

Some of the original swings are gone, though. A massive swing nicknamed “The Mother of All Swings,” which was a main attraction, was removed. “You could probably fit 16 people on it,” Fields said.

Fields continues to “[keep] an eye” on the space, though not in an official capacity with be(in)tween. A contractor by trade, Fields built the swings that hang there now; he was also the one who maintained and upgraded the original swings hung in fall 2012.

Reflecting on the initial project, Hayes said, “It was one of those moments; it made sense, the community bought into it — but that doesn’t necessarily mean that the way to change a place or a community space in the city is always by going through this back door, guerrilla style.”

There is a process for changing or updating public spaces but Korban admitted doing so is not a high priority. However, he noted that “we’re open to ideas.”

“Come to us, first, and, collaboratively, we can create something that is beneficial to all,” Korban said.

Hayes is confident, though, that in this situation the stealth act of hanging swings without approval was necessary. Korban said that without the popularity and public support, the swings probably would have just been taken down.

Now it appears the Swing Park is here to stay.

James Boland is a fifth grade teacher at the Tamarack Waldorf School on Brady Street less than five blocks away from the Swing Park. Over the last few years he’s taken classes there to study physics and to learn about the Milwaukee Bridge War of 1845, among other things. The school didn’t use the park before the swings went up, he said. “It wasn’t really a destination.”

What’s different? “Just the fact that people use it now, that’s what we were hoping,” Fields said.

“It’s free and fun and whimsical,” Salvia said. “Everybody likes to swing.”