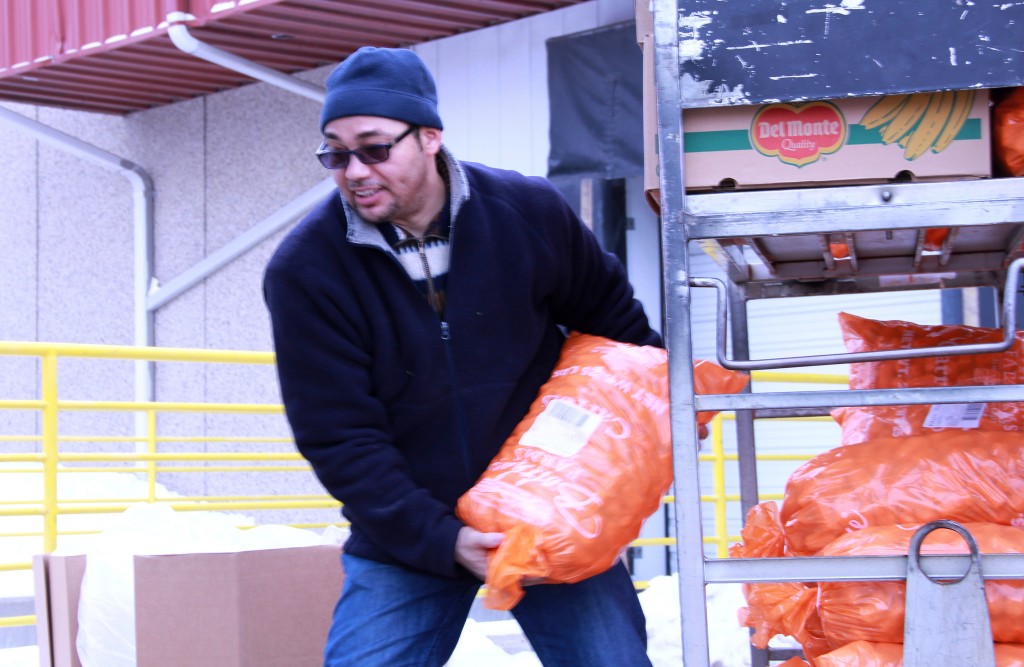 Ready-to-eat, processed foods offer a cheap and convenient source of calories, but are often loaded with fats, sugar, sodium and preservatives.

Given the convenience and long shelf lives of processed foods, Milwaukee’s charitable food programs also have easy access to a plethora of unhealthy options.

“Nutrition is always a challenge,” said Becky Long, program and volunteer manager at The Gathering at 833 W. Wisconsin Ave. “It’s so easy to get things like bakery [products] donated and it’s not as easy to get fresh produce, especially in the winter.”

The problem stems from government food policies, which have heavily subsidized the mass production of crops such as corn and soybeans, and consequently made it much cheaper to produce processed foods, which rely on these ingredients.

Hunger Task Force and Feeding America Eastern Wisconsin have addressed the problem by increasing the amount of fresh produce rescued from retailers and sourcing directly from area farms.

“We live in Wisconsin where we grow enough food to feed 30 developing nations,” said Sherrie Tussler, executive director of Hunger Task Force. “Why are one in four kids in Milwaukee going without enough food to be healthy?” 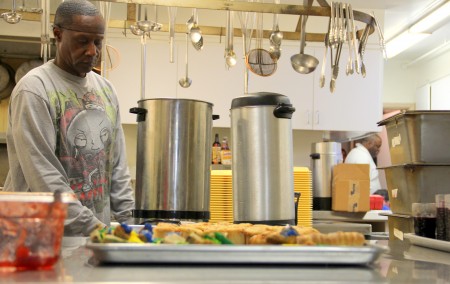 Volunteers are the driving force behind Milwaukee’s network of charitable food programs. (Photo by Molly Rippinger)

In 2004, Hunger Task Force acquired a 208-acre farm in Franklin, which was formerly a prison work farm. Today, more than 25 varieties of produce are grown and 778,000 pounds of produce were distributed last year.

Hunger Task Force welcomes volunteers to come to the farm and help with daily operations. The farm also has a hands-on nutrition program where more than 2,100 area school children came to learn about healthy eating in 2014.

Retailers and groceries are encouraged to participate in the program as a way to help their community, reduce garbage removal costs and increase tax deductions. Also, the Good Samaritan Food Donation Act protects donors from criminal or civil liability when they give to nonprofit organizations. “There are a lot of trickle-down benefits,” said Gina Styer, communications manager for Feeding America Eastern Wisconsin. “It’s really a win for all of us.”

To help incorporate more locally sourced fruits and vegetables into meals, The Gathering community meal program established the “Fresh Produce Preservation Project” in 2010. During the harvest season, farms donate some of their crops, and volunteers help preserve the produce by canning or freezing. The program preserved almost 2,000 pounds of food last year alone.

“We stay as balanced as we can with what we have on hand,” said Long. She explained that among The Gathering’s network of volunteers there are registered dieticians and licensed nutritionists who look over the menus to assess their nutritional value.

Jean de Vita, a registered nutritionist, volunteers at the pantry and has helped implement higher nutritional standards through the Riverwest Health and Wellness Committee.

“Sourcing food through donations and commodity programs historically has translated into less control over nutritional content,” she explained.

One way Riverwest has emphasized nutrition is through cooking demonstrations, which help clients learn about more unusual fruits and vegetables, such as jicama, with samples and easy recipes to take home.

Riverwest is also a choice pantry, meaning clients are able to walk along the aisles and pick from a variety of options. Hunger Task Force, which was established by registered dieticians and nutritionists in the 1970s, has identified choice pantries as the preferred method for food pantries.

“Client choice is important to us not only because it’s helping with the dignity of the individual, but also because it’s reducing wasted food,” said Tussler. When clients leave pantries with items that align with their personal tastes and cultural preferences, it makes the experience of visiting a food pantry more pleasant and the client is less likely to waste the food.

Feeding America has also stressed nutrition through its “Foods to Encourage” program, which is aligned with USDA Dietary Guidelines. “It sounds really nice on paper, but it’s much harder depending upon an individual food bank’s partnerships to meet those individual categories,” said Styer. Currently, 71 percent of Feeding America Eastern Wisconsin’s warehouse inventory meets the “Foods to Encourage” standards.

Food banks, pantries and hot meal programs are not excused from industry standards and health codes. All food establishments, including food pantries that serve hot meals, are required to undergo an annual inspection by the City of Milwaukee Health Department (MHD) to ensure their practices are up to code.

“If it’s a food pantry where people can pick up food, we will advise them on the proper storage of the food,” said Sarah DeRoo, health communications officer for MHD.

DeRoo explained that many of the health code violations acquired by food pantries are a result of the buildings in which they are housed. “They [food pantries] tend to be in older buildings, such as churches, so we assist them with things like proper removal of any rodents or giving guidance on safe food storage.”

Other common infractions for pantries that prepare meals include holding food at improper temperatures or poor hygiene practices by the staff, such as not wearing gloves or having unrestrained hair. “One of the difficulties is that you have very well meaning individuals operating something small out of the goodness of their hearts,” explained DeRoo.

To receive food from Hunger Task Force, pantries must sign an agreement that requires them to meet specific standards including pest control, overall cleanliness and proper food storage. A manual, referred to as the Standards of Excellence, provides guidelines for addressing food safety, civil rights compliance, confidentiality and Limited English Proficiency (LEP).

Tussler explained that the goal is for 85 percent of Hunger Task Force pantries to be rated “good” or “excellent,” but only about half a dozen of its 80 pantries currently meet those standards.

To acquire food from Feeding America, programs must pay a $100 membership fee that is immediately entered into their account to be used for food purchases. Programs are also charged a shared maintenance fee of 19 cents per pound of food. “The shared maintenance fee gives them ‘a little skin’ in the game,” explained Styer. “It makes them feel more responsible about the food and how they are handling it.”

When programs register to become a member of Feeding America they must provide information pertaining to the number and ages of clients served, and the number of days they operate the program. Site visits of the member programs are conducted every two years.

“We want to make sure that once the food is leaving our facility, it maintains its proper integrity,” said Styer.

Hunger and poor health remain harsh realities for many Americans despite the increased efforts of food banks, food pantries and hot meal programs. The most recent census data shows that about 50,000 Milwaukee children live in households that struggle with food insecurity.

Many Milwaukeeans rely on food charities. “This is life,” said Richard Suero, pastor of Faith/Santa Fe Lutheran Church, as he picked up food from Feeding America. “If we don’t have this food then we cannot provide for our community.”

Ultimately, providers of free food for the hungry strive for the day when their services are unnecessary. “It’s unfortunate that we need it,” said Styer, referring to the large network of charitable food programs in Milwaukee. “But thank goodness we have it.”